How Does Your Body Compare To a Pro Athlete’s? 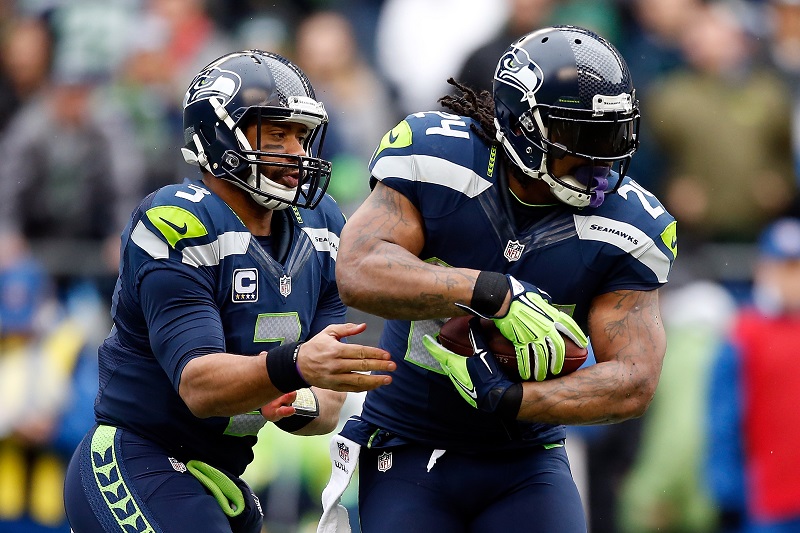 Watching Marshawn Lynch bowl over defenders with the power of an ox, or even seeing Lebron James use his machine-like makeup to compile triple-doubles, can make any man envious. These are but two examples of outstanding professional athletes — men who have all but dedicated their lives and streamlined their natural physical talents to reach the pinnacle of their chosen pastime.

They’re fit, muscular, and intimidating — all things that any man, deep inside, aspires to be.

And that can have an affect on the male psyche. Though body image is typically something men don’t talk about — or think about, in many cases — it’s something that everyone struggles with. While we’ve heard, for years, about how supermodels and pin-up girls thrust unrealistic expectations on women to maintain a certain body type, men are subject to this as well. But instead of fashion models or actresses, men look to professional athletes.

This is the basis of a new study put together by Psychguides.com. The study, dubbed “Male Body Image and the Average Athlete,” looks at just how far from the center of the bell curve professional athletes’ bodies are, compared to the average male. Because these athletes are outliers, men who look up to them, and aspire to achieve the same body types, can put themselves in real danger.

“Men are influenced, perhaps more than ever, by media depiction of an athletic body ideal but are given little in the way of healthful guidance in how to approximate it. Left to their own devices, many people opt for methods that are anything but healthy,” the study says.

“The struggle to achieve a perfect physical ideal can give rise to body dysmorphia, disordered eating, purge behaviors including excessive exercise, and abuse of pharmaceuticals that include laxatives and stimulants, or illicitly obtained anabolic steroids.”

To get to the bottom of things, Psychguides.com “compiled statistics from the NFL, MLB, NBA, and other major sports leagues to determine the average body size of players in each field and compared them to the body sizes of men around the world.”

The study itself is quite extensive, so you should probably take a look at the entire thing for yourself. But if we were to take one thing away from it, it’s that professional athletes come in all different shapes and sizes, and that in many cases, the physical makeup of these athletes not only varies wildly, but is also a far-cry from the average male.

Then, as you can see, you have the average male — all the way to the right of the graph. Of the four or five major sports in the U.S., Major League Baseball players are the closest, physically, to the average male. But there’s still quite the discrepancy — MLB players are four inches taller and more than 25 pounds heavier.

Next, we can see the disparity in body type — through height, weight, and BMI — among America’s top four sports leagues, the NFL, NBA, MLB, and NHL: 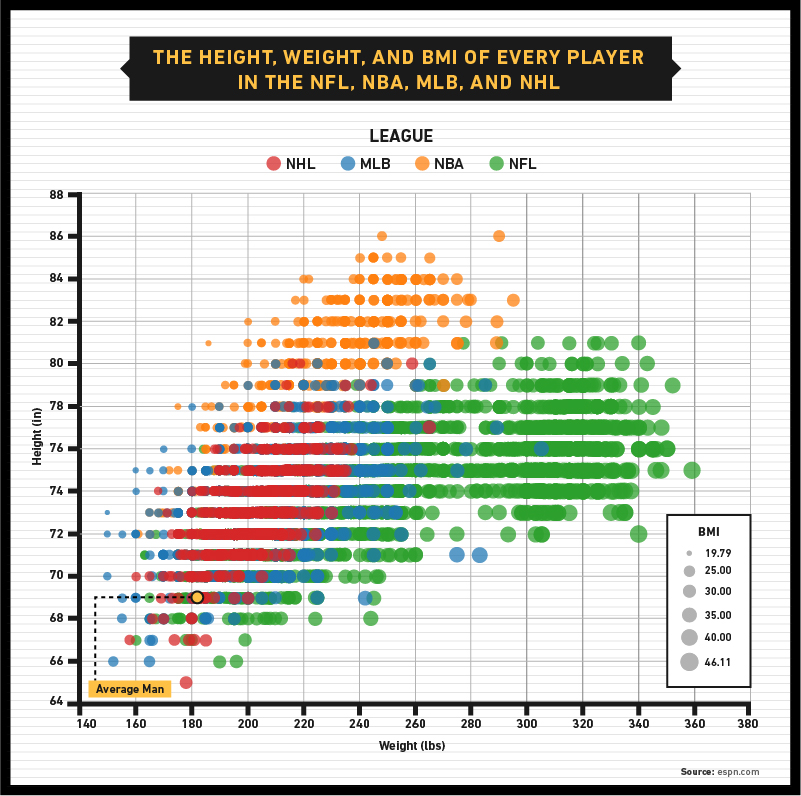 Again, this graph shows us that if there are any athletes that are ‘average’ in terms of physical makeup, even among the pool of professionals, it’s baseball players. But the issue with that, as it relates to male body image issues, is that a lot of men don’t necessarily look to baseball players when they think of their fitness idols.

Ichiro is a hell of a ball player, to be sure. But there aren’t a lot of guys in the gym who are aiming for his body type, for example.

Men are typically looking up to football or basketball players — guys like Lebron James, Clay Matthews Jr., and others. And as we can see from the charts, those are the guys that are typically the furthest from being “average.” So, it’s in bridging that gap that a lot of men run into issues with body image and the accompanying problems that come with it.

The takeaway here is to try and examine your own thoughts and feelings, and take body image issues seriously. You may have never even realized it, but you might be striving for a physique that, quite frankly, you’re never going to have. Setting realistic goals and maintaining realistic expectations is definitely important, as is keeping things in a healthy balance.

Again, if you want to check out the study in depth, head over to Psychguides.com.