How This Spa Treatment Can Clear Skin and Soothe Muscles 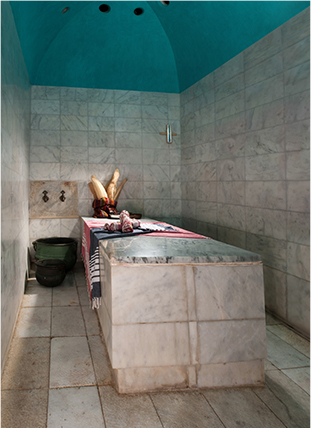 If you think taking a bath is the best way to calm aching muscles and relax, you’ve never tried a hammam treatment. Don’t feel too sheepish because not many people in the U.S. have. An ancient bathing ritual with Roman roots, hammam rituals haven’t caught on stateside despite popularity in locations around the Mediterranean, including The Efendi Hotel, a boutique stay in the northern coastal plains of Israel. The treatment may soon catch on here as the tremendous wellness benefits are making the retreat popular among active individuals.

The ritual works to improve blood circulation and relax the muscles thereby reducing tension. It aids in detoxification and hydration, and improves overall well-being by mitigating stress. What really sets the bathing ritual apart from other spa treatments, however, is it cleanses the skin at a deeper level. Not only does this improve the aesthetics of the skin but, according to Lisa Sargent, guest service supervisor at the Mayflower Grace Spa, it “opens the airways, allowing for the sinuses and bronchial tubes to be cleansed.” She also said, “the process works to draw out toxins.”

While the ritual varies from place to place, it typically begins with exfoliation via dry brushing and/or scrubbing. A clay mask is then applied to the body because of clay’s ability to draw out impurities. You’ll then relax in a hot steam to soften the clay and open the skin’s pores, releasing toxins, bacteria, and other impurities. A therapist from Pera Palace Hotel Jumeirah explained, “The heat dilates the blood vessels, which immediately improves the circulation, producing a positive tonic effect.” The therapist went on to explain the pores in the skin also dilate making deep cleansing and purification possible, all of which translates into softer, more elastic skin.

Alongside cell renewal the steam soothes skin problems, reducing acne and dermatitis (Bye-bye, sweat-induced bacne!). The beneficial properties of a hammam treatment can also help people suffering from localized aches and pains since better blood circulation carries more oxygen to damaged areas. This inevitably reduces pain and leads to more rapid healing. While anyone can benefit from the relaxing and detoxifying effects, athletes in particular love hammam treatments because they ease recovery while preparing the muscles for another effort. You can sort of think of it as a steam room on steroids.

Lastly, according to the Pera Palace Hotel Jumeirah’s spa expert, heat helps to shift lingering cold symptoms, decongesting the nose and chest. The warmth also makes it easier to get rid of excess mucous and toxins including salt, alcohol, nicotine, cholesterol, heavy metals, and other invasive organisms.

What makes this spa treatment, like the one found at The Efendi, so renowned is that most of the ritual is performed on a warm platform in a marble-lined room. At this point, soap, usually an oil-based castile variety, and a traditional Moroccan mitt are used to boost circulation and relax the muscles. The Efendi is known for sprinkling hot and cold water on the body during the treatment, according to traditional methods. The combination of heat, aromatherapy, and steam work in tandem to cleanse the skin and open the pores to promote detoxification.

Good news, you can now find hammam treatments at a growing number of locations in New York, including the Spa at Trump SoHo and AIRE Ancient Baths. If you have serious relaxation in mind, though, the Efendi Hotel offers the most holistic approach.

It’s located in a 12-room luxury boutique hotel that was once the site of two early Ottoman Empire mansions. The founder, famed chef Uri Jeremias, spent six years and $6 million renovating and joining the palaces together; no detail was spared. In fact artists from Italy were flown in to recreate the original frescoes and restore the ceilings. This restoration maximizes views of the surrounding UNESCO World Heritage Sites.

The hammam itself is nearly 400 years old, and treatments can be preceded by breakfast around a knight’s table in a centuries-old room. Follow the morning meal with a glass of red in the wine bar, where hundreds of bottles lay next to one another in the original arches of the building’s 900-year-old cellar, which contains remnants from the days of the Byzantine Empire. Detox to retox never sounded so good — or healthy.