Across the country, NFL training camps are a sign that the upcoming pro football season is drawing closer. (Your coworkers’ fantasy football drafts at Buffalo Wild Wings are probably an indicator, too.) The glimpses we’re seeing of running routes, passing plays, and sprints down the field remind us that football might be on TV for half the year, but the training season for players never stops — especially during training camps.

The reality is that players need to come to training camp already in shape for grueling drills and midsummer practices. But the areas that have gone soft over several months of the off-season quickly get whipped into shape. Training camps are no joke, writes Ryan Riddle, now a Bleacher Report writer but formerly an Oakland Raiders defensive end who also plays for the Jets, Falcons, and Ravens. “Each year the fight to survive another season begins under the sweltering summer sun. The days are long, the pain is real and the pressure is incredible,” Riddle recounts of his NFL training camp days.

The hard work pays off, though. There’s no doubt that players in the NFL are some of the most athletic men in the country, and if you’re looking to step up your workout game, it can’t hurt to take a few pointers from the pros. You might not have the advantage of several months of pre-training camp workouts on your side, but there are definitely ways to adapt those routines to your own gym workouts. Here’s a few tips and some exercise routines that will make you feel like you’re in the middle of a training camp, unfortunately minus the free team swag.

1. Focus on the basics 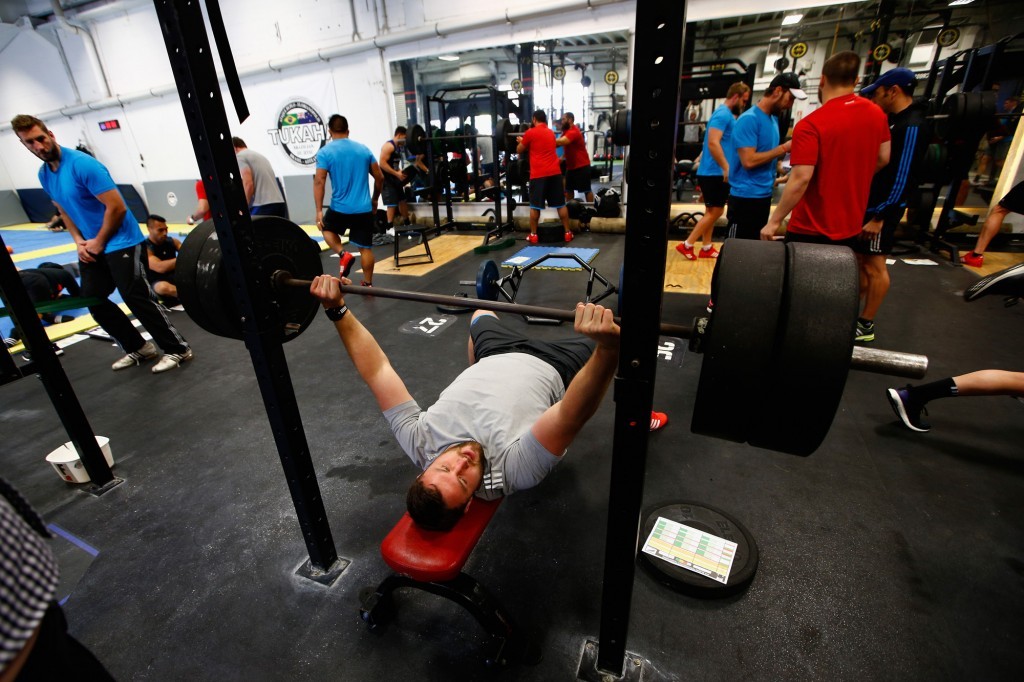 Every year, several former University of Miami Hurricanes travel back to their alma mater during the NFL’s offseason to train under their former college strength and conditioning coach, Andreu Swasey. For years, players like Willis McGahee, Jeremy Shockey, Clinton Portis, Santana Moss, Ed Reed, and more have come back to train under Swasey’s leadership, alongside current Hurricane players.

Several years ago, Men’s Fitness reported that Swasey has little time for “fancy” equipment like Bosu balls or foam rollers that many teams have begun to use. The reason? “The old stuff works and always will,” Swasey told the publication. In other words, if you’re looking to get in great shape, don’t think you need an intricate new routine. Players under Swasey — Hurricanes and NFL players alike — train by doing exercises like the bench press, Romanian deadlifts, and ladder drills. Men’s Fitness even compiled a sample weekly workout routine to try, modified for likely skill level and time constraints of a “normal” person who isn’t getting paid millions to work out in the offseason.

If you’re looking to increase your speed and agility, following tips from the speediest of the NFL players will help you out. DeMarcus Ware, now a defensive end for the Denver Broncos, said exercises like cable-resisted physioball crunches helped him to make sure he could beat the tackles in his linebacker days with the Dallas Cowboys. “Everything I do starts with the core,” Ware told Stack. “The majority of the moves I do on the field, I’m going to have an offensive lineman grabbing and tugging on me, so I have to use my core to make an explosive movement” to beat the block and get to the quarterback. In other words, even NFL players don’t get out of crunches. They’re just more intense.

With a cable machine behind you, lie with your upper back on the physioball while holding the crunch straps in each hand just above your chest. As you crunch upward into a sitting position on the ball, the cable resistance behind you will help to strengthen your core, especially as you keep those muscles tight the entire time. Stack suggests including this in your workout by doing 3 sets of 10 to 12 reps each. 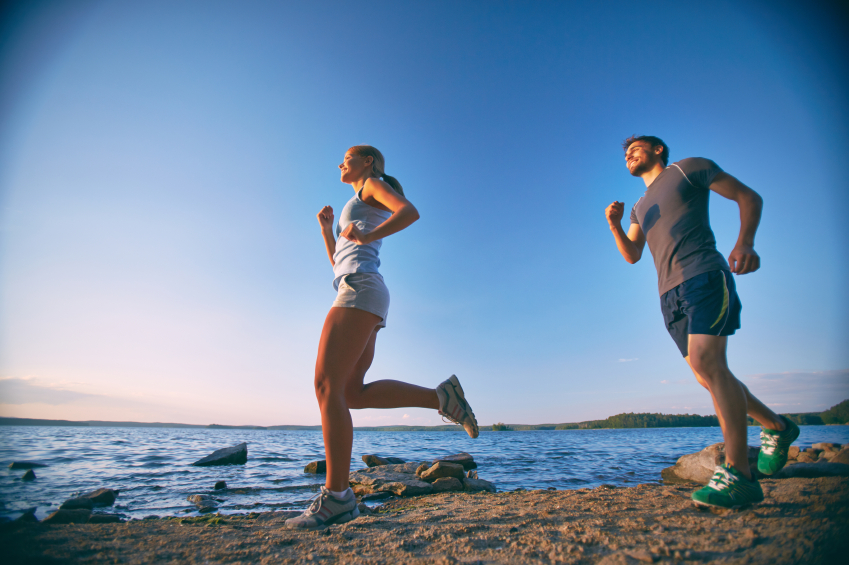 Summertime might be winding down, but it’s no surprise that this tip also comes from Hurricanes conditioning in the heart of Miami and South Beach. This tip won’t be helpful if you don’t have access to a beach or a sand pit, but the benefits are huge if you do. The sandpit it notorious in Swasey’s workouts, in which players endure rigorous lateral shuffle drills.

“We don’t have hills, so we use the sandpit for resistance,” Swasey told Men’s Health. “The speed of the game is multidirectional. You need quick feet and change-of-direction ability, and the sand helps with that.”

The sand absorbs all the force you exert with your feet, which means your muscles have to work harder than when you’re working out on firmer surfaces like rubber or grass. Performing drills on the sand barefoot can also help to prevent injury in the long run, Men’s Fitness reports, because without shoes the muscles in your feet and ankles learn to work in unison with your knees. Your Achilles tendons might complain, but otherwise it’s a great way to get more out of some simple cardio or drills.

Squats build strength while also improving balance and stability, so it shouldn’t be a surprise that most football workouts include tons of variations. The Kettlebell Bulgarian squat is one, used by Cincinnati Bengals linebacker A.J. Hawk. Numerous variations are also staples in several football-inspired workouts, including box squats and more.

Plus, squats have great implications for everyday life. Building muscles in your legs and back (and really all over) helps to take the stress off your knees. Squats can get a bad rap for being knee-killers, but they’ll actually benefit you when performed properly. Some resources advocate for full-body squats, where you’re going as low as you can go. If your knees are already in bad shape, this might not be a good call for you, but definitely don’t neglect some variation in your typical gym routine. 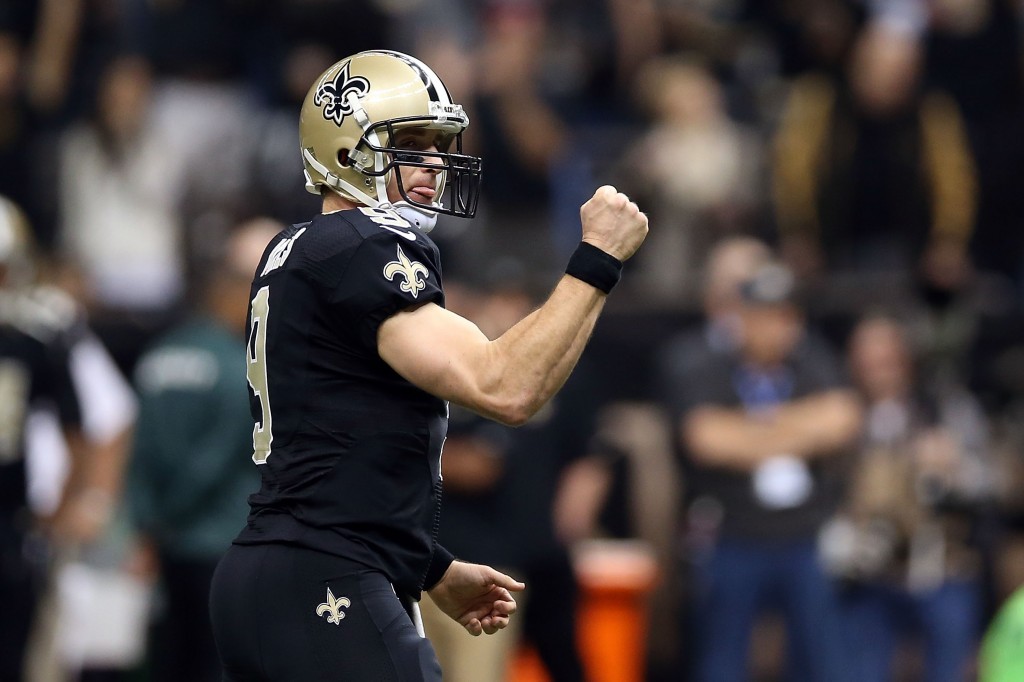 New Orleans Saint’s quarterback Drew Brees can slam a 420-pound truck tire with a sledgehammer, but that’s just a part of his training routine. In most cases, the mental state dictates how successful a training session actually is. “My body can only go as far as my mind can take it,” Brees told Stack. Apparently, that’s pretty far. The veteran quarterback led his team to a Super Bowl victory in 2009 and is this season’s No. 5 quarterback pick in ESPN’s fantasy football rankings.

Brees has overcome disappointing months of nonexistent college recruiting and injuries, and is known to be the last one on the field during training days, completing extra 300-meter shuttle runs. “We’re always looking for the edge,” said Todd Durkin, one of the men responsible for keeping Brees in shape each year. “We always talk about trying to get one percent better today, taking the little extra effort—and then some.”

It’s that one percent better that will make a difference on the field during NFL Sundays, and it’s the same mentality that will make sure your workouts keep improving.