Ashley Graham is breaking the modeling industry as we know it — and for all the right reasons. The 30-year-old model, designer, and body activist is taking away the “plus size” stigma, and is advocating for all women to feel beautiful in their own skin.

Now, she’s teamed up with Swimsuits for All, a swimsuit line designed for women of all sizes. Graham’s collaboration is unforgivably sexy, and encourages women to embrace their bodies. Here’s a look at everything to love about her swimsuit collection — plus, 10 things you probably didn’t know about the model.

Her swimsuit collection fits sizes 4 to 24

She makes sexy swimsuits for women of all sizes. | Ashley Graham via Instagram

You could already shop from Graham’s collection with Swimsuits for All, but now, she’s got a whole new line that dropped in May 2018. Based on what we’ve seen, they reach a whole new level of sexy. Graham modeled a few of the pieces herself before the launch, which she shared with her Instagram followers to obsess over.

Her pieces are available in sizes 4 to 24, so women of all sizes can get excited to find their perfect swimsuit for the summer.

Next: We’re loving the way she’s modeling her suits.

She’s showing off her body from all angles

She proudly displays cellulite, scars, and other things women might feel insecure about. | Ashley Graham via Instagram

Graham isn’t one to shy away from showing her “imperfections.” In fact, she embraces and celebrates them. She made sure to show all angles of her body while giving a peek at a new one-piece, simply captioning the photo, “New suit – who dis? Drops in May.”

At the TIME 100 gala in 2017, Graham was asked to name an inspirational moment in her career. Her response? “When I took a photo of my cellulite and posted it on Instagram,” she said. “I don’t think that other women should be afraid of theirs as well.”

Those other women definitely agree, considering the comments on her photo above include, “You’re so empowering! Thank you for being so real” and “really did need this.”

Next: You may not know these things about her.

She is an activist for all women. | Cindy Ord/Getty Images for #ImNoAngel Cacique Exclusively For Lane Bryant

Graham might receive compliments on her Instagram posts for finally showing what a “real woman” looks like, but she’d rather they use a different choice of words. She took to her Instagram stories to challenge her fans by noting, “We are all real women.”

She continued, “I can’t stand it when I read comments that say ‘finally, a real woman.’ No matter what your size/shape/amount of cellulite — we are in this together.”

Next: She already has this designing experience.

She designed an amazing lingerie line. | Ashley Graham via Instagram

Her line with Swimsuits for All isn’t the first time Graham designed a collection. She’s designed 17 lingerie collections with Addition Elle, as well as a denim capsule collection with Marina Rinaldi. She admitted to Us Weekly, “Designing is one of my favorite parts of my job.”

Next: Her marriage isn’t conventional — but it works.

3. She makes long distance work with her husband

Long-distance relationships are never easy — but they make the best of it. | Gustavo Caballero/Getty Images for Sports Illustrated

Graham and her husband, Justin Ervin, work on different sides of the country — but they have a method to their successful long-distance marriage. The two tied the knot in 2010, and now Ervin is a cinematographer based in Los Angeles while Graham works out of New York City.

She spilled to Entertainment Tonight, “We have a rule. We don’t go longer than two weeks without seeing each other. It’s absolutely fabulous. I love it. We just meet in L.A. or New York. We meet in Paris, Miami. It’s pretty sexy.”

Next: This network banned her lingerie commercial.

4. Her Lane Bryant commercial was banned from ABC 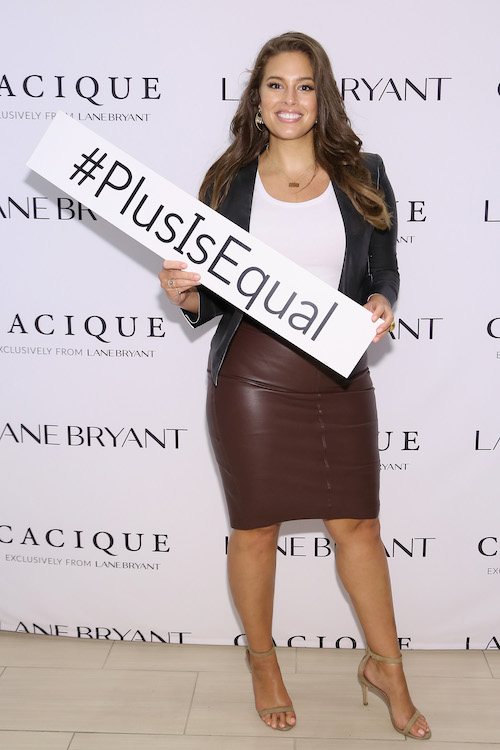 She spoke up about the double standard. | Monica Schipper/Getty Images for Lane Bryant

Graham wasn’t happy when ABC refused to air her Lane Bryant lingerie commercial in 2010 without heavy editing. She told the New York Post that she was “very surprised,” recalling, “The first thing I thought of was Victoria’s Secret commercials, and how they’re just as racy, if not more racy, than Lane Bryant.” She added, “The models are just a lot smaller than what I am.”

ABC reportedly claimed her 38D size was too busty, to which Graham criticized that they couldn’t handle “bigger boobs on a normal-sized woman on TV.” The network eventually came around on airing the full commercial, but only after Fox agreed to show it during American Idol.

Next: She started modeling lingerie at this young age.

5. She modeled lingerie at 13 years old

Her mother supported her modeling endeavors as a teen. | Linda Graham via Instagram

Graham got her start by signing with her first major fashion label at 13 years old. She began with modeling lingerie, and according to Graham, “My mom had to sign a waiver to airbrush out my nipples!”

Next: If you catch her at a karaoke bar, here’s what she’ll be singing.

She brought out her best moves. | Comedy Central Latino America via YouTube

Graham has proven to have a big personality as a judge on America’s Next Top Model, so we’re not surprised that her go-to karaoke artist is Shania Twain. She recalled to Us Weekly, “I fell off the stage during the taping of my ‘That Don’t Impress Me Much’ performance on Lip Sync Battle! But I still won.”

Next: Here’s the adorable yet hilarious way she met her husband.

7. She met her husband in an elevator at church

They met in a memorable way. | Dia Dipasupil/Getty Images

Graham and her husband have an adorable (and hilarious) story about how they met. She told Us Weekly, “My husband Justin and I met in an elevator at church. He rode it up and down a few times just to talk to me. It worked — we’ve been married for seven years!”

Next: She’s making a difference in more ways than one.

8. She teamed up with models to form the ALDA organization

She teamed with other models to start a movement. | JP Yim/Getty Images

Graham teamed up with fellow models Marquita Pring, Julie Henderson, Inga Eiriksdottir, and Danielle Redman — to make a difference together. They formed the ALDA organization, which celebrates and promotes body diversity beyond just the modeling world.

ALDA, which means “wave” in Icelandic, believes, “Every model should be represented equally,” regardless of being a size 2 or 12.

Next: It turns out she’s not good at everything.

She admits at being bad in the kitchen. | Jamie McCarthy/Getty Images for Sports Illustrated

We can’t all be good at everything. She admitted to Us Weekly, “I have many talents, but cooking isn’t one of them. My one signature dish is kale pesto pasta.”

Next: She’s not afraid to speak up about her body.

She gave an inspiring TEDx Talk. | TEDx Talks via YouTube

Graham doesn’t just radiate body positivity — she speaks it, too. In May 2015, she delivered a TED Talk to a sold-out audience about embracing her body. She expressed, “I felt free once I realized I was never going to fit the mold that society wanted me to fit in.”

She continued, “I was never going to be perfect enough for an industry that defines perfection from the outside and that’s okay. Rolls, curves, cellulite, all of it — I love every part of me.”