Inside the Volatile Relationship Between Donald Trump and His Siblings

Donald Trump is the most famous among his parents’ five children, but it has not always been smooth sailing between the president and his brothers and sisters. Over the years, there have been issues with money, a thirst for power, and more that have paved a rocky road through the Trump family.

Trump’s father, Fred Trump, always favored Trump over his siblings because he shared the same drive for success as his father did. Trump wanted to learn the business from his father and expand the Trumps’ empire even more. Fred Trump frequently let his son borrow money from him — some reports suggest it went far beyond the “small loan of $1 million” that Trump initially said. His father also helped bail him out of bankruptcy multiple times.

Next: Donald doesn’t have a lot in common with his siblings.

He didn’t have much in common with his siblings

Donald was not a fan of Fred Jr. | YouTube

Growing up, Trump was always after the money. He knew he wanted to see even more success than his father did. He frequently belittled his siblings, especially Fred Jr., his older brother. Trump craved the spotlight, but his siblings were not as interested in the fame and fortune of his father. While most of them pursued successful careers, they didn’t host television shows, date supermodels, or run for president.

Next: Donald exploits his own brother’s shortcomings.

He capitalized on his brother’s weakness

Donnie saw an opening and took it. | Alex Wong/Getty Images

When Fred Trump Sr. created his real estate empire, his son, Fred Jr. was initially supposed to follow in his father’s footsteps. Fred Jr. did not have the poise or the passion to run the business and developed a serious alcohol problem as he got older. Trump saw it as an opportunity to capitalize on his brother’s inability to take over the business. Trump had the drive for success that his brother did not, and it helped him make Trump real estate an international name.

Next: Donald learns from his brother’s mistakes.

… and learned from his brother’s mistakes

While Trump and his brother did not get along too well, he did see the damage alcohol did to his brother’s life. Fred Jr. would frequently tell Trump to never start drinking, and Trump listened. His brother died from complications related to alcoholism when he was in his 40s, leaving behind an entire family. Fred Jr.’s addiction is the reason Trump never touched alcohol or cigarettes in his life; he saw it destroy his brother.

Next: Donald and his siblings turn their back on their brother.

Since Fred Jr. was not favored much by Trump’s father, he essentially cut his grandchildren and great-grandchildren out of his will. Fred Jr.’s grandson was born with a neurological disease that caused severe seizures. The Telegraph reported that Trump and his siblings, Robert and Maryanne, withheld $300,000 in medical care payments for the baby. He even told a reporter, “Why should I give him medical coverage?” When asked about whether or not the public would think he was cold-hearted, he replied, “I can’t help that.”

Next: Donald’s sister chooses not to defend his actions.

His sister did not back him up when he needed her 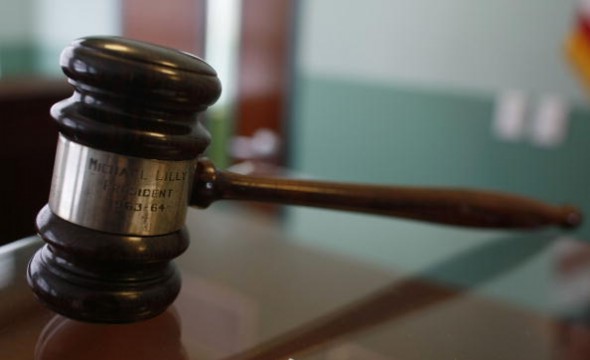 Maryanne did not defend her brother. | Joe Raedle/Getty Images

Trump once made comments that Mexican judges can’t judge impartially, and they would not be a good fit for the court. Trump’s sister, Maryanne, is a judge herself and declined to comment on Trump’s harsh stance. While she didn’t condemn his stance the way many other Republicans did, she did not rush to defend her brother by any means (who can blame her?). When New Republic asked about her thoughts on his words, a clerk in her chambers said she was not available to comment on the issue.

Next: A different sibling shows support.

… but his younger brother does support him

Trump’s younger brother, Robert, never loved publicity the way his brother did — especially after the infamous affair he had in the early 2000s. However, when asked about Trump’s presidency, Robert did support his brother. In an interview with Page Six in early 2016, Robert said, “I support Donald 1,000%. I think he’s doing a great job. He’s got a great message.”