From Sofia Vergara to Julia Louis-Dreyfus: Popular Celebrities With Cancer Reveal How They Fought Back

Celebrities live a life of glitz and glamour. They seem to have it all. However, Hollywood stars are just like us. They get ill, injured, and even suffer from potentially life-threatening diseases. They might seem invincible, but celebrities are far from it. Here are 15 celebrities who have battled cancer.

Sofia Vergara was once diagnosed with a very common cancer. | Kevin Winter/Getty Images

Actress Sofia Vergara was diagnosed with thyroid cancer at the young age of 28. The cancer was discovered after Vergara’s doctor ordered screening tests (the doctor felt a lump in the actress’s neck). The Modern Family star needed surgery to have her thyroid removed and she now takes daily medication. The actress continues to fight cancer by going to the doctor for regular checkups. She was also part of the “Follow the Script,” campaign, which was created to help educate people about hypothyroidism.

Next: This celebrity found strength through documenting her journey.

Shannen Doherty found connecting with others to be therapeutic. | Brad Barket/Getty Images

Former Beverly Hills 90210 actress Shannen Doherty revealed she had breast cancer in 2015. She shared an emotional post on her Instagram account about her struggle with breast cancer. During her two-year battle with the disease, she kept her spirits up by frequently documenting her journey on Instagram and taking time to be with friends.

Next: This star had a very common form of cancer.

Actor Hugh Jackman spoke about his battle with skin cancer on the talk show Live! with Kelly. He told the host he had basal cell carcinoma, which is fortunately the least dangerous type of skin cancer. Jackman said he’s pushing back against cancer by wearing sunscreen and going to his doctor for regular checkups. The Wolverine star, who has had six cancers removed from his nose, strongly urges others to do the same.

Next: This stunning celebrity is one of many with this form of cancer.

Julia Louis-Dreyfus is looking to focus on life’s joys during this difficult time. | Mark Ralston/Getty Images

Actress Julia Louis-Dreyfus announced her breast cancer diagnosis on her Twitter account in September 2017. She told her fans, “1 in 8 women will get breast cancer. Today, I’m the one.” The former Seinfeld and current Veep star is getting through this challenging time with support from friends and large doses of humor. She posted a video of her costars trying to cheer her up and encourage her to keep fighting.

Next: This basketball star is determined to help others. 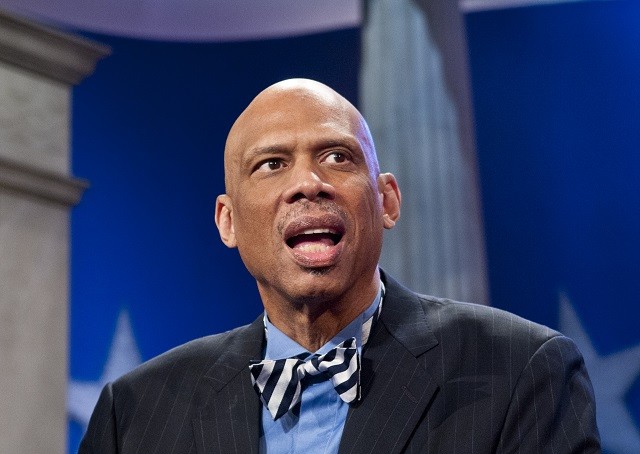 Former basketball player Kareem Abdul-Jabbar revealed his leukemia diagnosis in 2009. He had been diagnosed with the disease, called chronic myelogenous leukemia or CML, a year prior. Abdul-Jabbar continues to fight the cancer battle by serving as a spokesman for Novartis, the company that makes cancer drugs Gleevec and Tasigna.

Next: This actress had to make a tough decision.

Christina Applegate went through difficult times and came out stronger than ever. | Kevin Winter/Getty Images

Applegate continues to take care of her health through regular screenings and elective surgery. In an interview with Oprah Winfrey, Applegate said her mother is a breast cancer survivor, so she has been getting mammograms annually since the age of 30. Then in 2017, Applegate revealed on the Today show that she also chose to have her ovaries and fallopian tubes removed. She is committed to being a champion for other women by founding Right Action for Women, which helps women at risk for cancer pay for MRI screenings and testing.

Next: This star made her cancer fight public.

Like Sharon Osbourne, you should make regular screenings a priority. | Jeff Spicer/Getty Images

The View host Sharon Osbourne was diagnosed with colon cancer in 2002. Osbourne had to have one foot of her colon removed as a result. She documented her experience on the MTV reality show The Osbournes. The cancer had spread to a lymph node, so Osbourne began chemotherapy for stage III cancer. The talk show host continues to fight cancer by advocating regular screenings. She also helped raise awareness of the disease by being an ambassador for Cancer Research UK’s Race for Life.

Next: This celebrity received a White House appointment.

Actor Hill Harper was diagnosed with thyroid cancer in 2010. He told Coping with Cancer magazine he knew something was wrong when he woke up one morning with a sore throat and he couldn’t swallow. The CSI:NY star said he immediately went to see a doctor. Fortunately, the cancer was caught early, and Harper didn’t need radiation treatment after his thyroid removal. Harper continues to fight cancer by getting regular screenings and through advocacy. In 2012, he was appointed by former President Barack Obama to the President’s Cancer Panel.

Next: This star beat cancer twice.

The news anchor is staying fit and healthy after recovery. | Kevin Winter/Getty Images

Television news anchor Robin Roberts revealed her breast cancer diagnosis on the air back in 2007.  She told her fans that she would be headed off to start chemotherapy treatments after that segment was over, and that she would be back to work as soon as she could. After successfully battling breast cancer, Roberts shocked fans again in 2012 when she revealed that she had been diagnosed with myelodysplastic syndrome, which is a type of bone marrow disease.

Roberts told People magazine she tries to reduce her chances of the disease coming back by engaging in regular exercise and eating a healthy diet.  “I do Pilates once a week; I work with a trainer … I love pasta but now I’m eating chickpea pasta because I had to cut back on wheat … And I’m Southern, we would fry water if we could, but it’s a change and I’ve accepted it. I know that if I take better care of my physical being, it’ll lessen the chances of the cancer returning,” said Roberts.

Next: Early detection may have saved this actor’s life.

Robert De Niro has been open about his battle with prostate cancer. | D Dipasupil/Getty Images

Actor Robert De Niro was diagnosed with prostate cancer in 2003. Fortunately, the cancer was caught early due to regular checkups. He had cancer surgery shortly after the diagnosis. De Niro continues to fight the cancer battle by going to his doctor for regular screenings. A source told The Daily News that the death of De Niro’s father from prostate cancer in 1994 prompted the actor’s vigilance.

Next: This actor is now in remission.

This star understood that staying active was a key part of recovery. | Ben Gabbe/Getty Images

Actor Michael C. Hall revealed that he had Hodgkin’s lymphoma in 2010. By the time he made his public announcement, he was in remission and finishing up cancer treatment. Hall continues to fight cancer by remaining active and living life to the fullest. Soon after his announcement, he made plans to attend the Golden Globes with his wife. He also went back to work following treatment. Hall told People magazine it was a gift to have the ability to return to work.

Next: This celebrity is making healthy lifestyle choices.

Dancing with the Stars host and sportscaster Erin Andrews revealed her cervical cancer diagnosis and surgery in 2017. Andrews continues her cancer fight through making healthy lifestyle choices. She told Health magazine her doctor told her to keep stress at a minimum and to get more rest. Andrews said she is working on heeding that advice through regular meditation practice.

Next: This celebrity is still enjoying a full life.

Larry King focused on what made him happy. | CNN

Talk-show host Larry King announced his lung cancer diagnosis in September 2017. He told US Weekly the cancer was caught in the early stages and his doctors were able to remove the growth immediately. King pushed forward and continued to work despite the cancer diagnosis. The 83-year-old recovered from the surgery so quickly that he was able to return to work just two weeks later. King said in the US Weekly interview that staying busy is what keeps him going.  “I’ve done everything I can do. I’ve done comedy, stand-up, I tell stories, I’ve written 15 books, I have done television [and] radio,” he said. “I would like to do six months on Broadway … That would be on my bucket list.”

Next: This actor battled oral cancer.

Michael Douglas has worked as a spokesperson for the Oral Cancer Foundation. | Kevin Winter/Getty Images

Actor and producer Michael Douglas was diagnosed with stage 4 oral cancer in 2010. Douglas continues the cancer fight by educating others about oral cancer. He created a television public service announcement for the Oral Cancer Foundation, which is a non-profit organization focused on helping those who have been impacted by the disease.

Next: This star said cancer was a wake-up call.

Today Show host Hoda Kotb was diagnosed with breast cancer. She said the diagnosis served as a wake-up call to make positive life changes. Kotb continues the cancer fight through her advocacy. She recently gave a speech at the Breast Cancer Research Foundation’s symposium and luncheon in New York. “Cancer shaped me, but it did not define me. It’s part of me, but not all of me,” said Kotb in her speech.