Kate Middleton, the Duchess of Cambridge, is known for her royal style. While some of it breaks even a fairly large budget, Middleton makes plenty of headlines for the tried-and-true outfits she recycles.

Some of them hold more significance than others, and the coat she recently wore is no exception. Let’s take a look at the duchess’ recent outfit choices and what she could be telling us with them (page 5).

Kate and Will took a day trip to Coventry

They looked great together during their royal trip. | Heathcliff O’Malley/WPA Pool/Getty Images

In January, the royal couple headed 100-plus miles northwest of London to visit the English city of Coventry and perform some royal duties. The itinerary included a day visiting the ruins of the city’s 15th-century cathedral, followed by a trip to the modern cathedral. They also participated in the “Litany of Reconciliation” prayer service, the purpose of which is “healing the wounds of history and building a culture of peace,” People reported.

Next: Here’s who was aptly waiting to welcome the couple.

A group of schoolchildren greeted them

The children loved interacting with her. | Heathcliff O’Malley/WPA Pool/Getty Images

The schoolchildren who greeted the Duke and Duchess of Cambridge in Coventry gave People some insight into the couple’s kids’ favorite toys. The 9-year-old student given the task of offering Middleton flowers revealed some details of her interaction with reporters. “I told them I had an American Girl doll for Christmas, and William said [Princess] Charlotte loves dolls,” she told People. “They were nice and cheerful.”

Next: The outfit that’s occupying the spotlight. 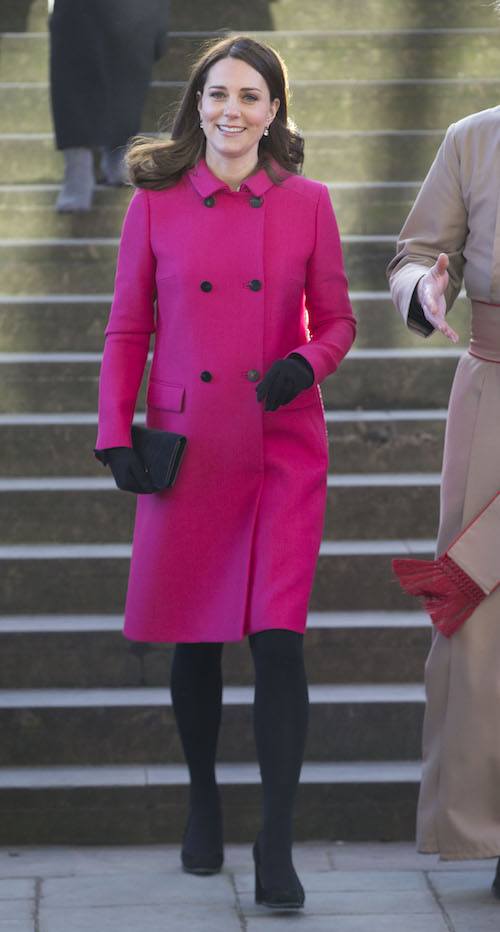 Middleton ventured out in a hot pink Mulberry coat as an accent, along with her black clutch, gloves, stockings, and heels. Media outlets were quick to point out that she has worn the coat previously — and that the duchess is one to recycle some of her favorite looks.

She recently wore a floral maternity dress that she’d donned while pregnant with Charlotte, as well. It’s refreshing to see a royal repeat her favorite looks, especially the affordable ones, such as the Seraphine Florrie floral print maternity dress ($109 at Seraphine).

Next: This isn’t the first time she has worn the coat.

The last time she publicly wore this coat was …

This could mean a lot. | Heathcliff O’Malley/WPA Pool/Getty Images

… When she was pregnant with Charlotte. The coat has sparked a few headlines because of its color, a hot pink hue that could indicate Middleton is pregnant with a girl, as she was a few years ago. Middleton has actually worn the coat twice before, and both times were during her pregnancy with Princess Charlotte — once on an official visit to New York and again a few months later.

Next: What the world is speculating

Could Kate be having a girl?

Middleton, who is due in April, may know the sex of her child, but mum’s the word — literally. The royal family is known for their private nature, and we commoners won’t know the sex or name of the future prince or princess until the royal announcement.

Yes, it could just be coincidence or a coat she prefers to wear while pregnant. However, if Middleton is dropping hints, we’re all ears (and eyes).

Next: Here’s why it isn’t a far-fetched assumption.

Kate has used clothing as a signal in the past

She could be leaving us clues. | Wochit Entertainment via YouTube

Middleton, our generation’s royal fashion inspiration, makes as many headlines for her royal duties as she does her style. She’s been rightfully called the “ultimate fashion diplomat,” and designers will drop everything to dress the duchess.

It’s not far-fetched to venture a guess that Middleton is using her coat to signal her baby’s sex. She has used clothing to promote positive foreign relations, after all. She wore Canadian-born British designer Erdem Moralioglu’s fashions at the start of her royal tour in Ottawa, sported Chanel for the first time on a visit to Paris, and wore a dress by Polish designer Gosia Baczynska to an event in Warsaw.

Next: We’ll have an answer soon.

For now, we’ll have to wait and see

We can’t wait to find out. | Chris Jackson/Pool/Getty Images

Middleton is due in April, so it’s feasible she’ll have her third child right before Prince Harry and Meghan Markle’s wedding. While traditionally the royal family doesn’t announce a pregnancy until three months before the due date, royal correspondents believe Middleton was forced to announce her pregnancy after missing multiple royal engagements due to difficult bouts of morning sickness, according to The Sun.

And bookies have speculated the third baby’s name for both sexes. The winning male names are Arthur, Henry, and Albert, and the winning female names are Alice, Victoria, and Elizabeth, The Sun reported.