Kelly Ripa Reveals the Morning Routine She Swears By

Any working mom knows how hectic life can get. As a mother of three who has been doing a morning talk show for almost two decades, Kelly Ripa juggles a jam-packed schedule every day. In addition to her daily show Live with Kelly and Ryan, she takes care of her family and also finds time to exercise and stay healthy.

Here we’ll show you the morning routine Ripa, 47, swears by to get through her busy days. See what she always eats for breakfast (page 4) and how she changes things up on those lazy Sunday mornings (page 7).

She only sleeps around 5 hours a night

Kelly Ripa has a habit of getting to bed super late. | Mike Coppola/Getty Images for Tribeca Film Festival

Ripa doesn’t typically turn in for the night until 1 a.m., and she often gets restless around 3:30 a.m. She finds herself checking on her kids at that hour. “Mark will say, ‘Why are you awake?’ I’m not sure,” she said. She often emails another “friend who’s an insomniac,” which could result in back-and-forth nighttime communication.

She eventually turns on the TV to find a repetitive-type infomercial to help put her to sleep. In all, she typically gets around five hours of sleep per night.

Next: Starting her day For getting to bed so late, she’s certainly an early riser. | Kelly Ripa via Instagram

Ripa’s alarm goes off 6:30 a.m. The first thing she said she does it take out her Invisalign. Her husband Mark Consuelos makes her a cup of cappuccino with half-and-half. Then she makes breakfast after the kids “place their orders,” she said.

Cooking breakfast for her kids is no small chore. “But my kids all have different breakfast likes. They’ll say, ‘Can I have scrambled eggs and a side order of pancakes?’ Sometimes I look at them like, ‘This is not Denny’s!’ It’s insane.” She holds off on her own breakfast, however. (More on that soon.)

Next: Clothes, makeup, and hair routine

She’s all set to get her day started before many of the rest of us are. | ABC

Ripa arrives at work at 8 a.m. That’s when her hair and makeup artist go to town. Ripa describes the two as “the tag team who have been doing my hair and makeup for 14 years. They are the masters,” she told Yahoo. “They do hair and makeup at the same time that I’m getting briefed.

The talk host’s wardrobe is put out at work the night before, making getting dressed a snap before going live. Although she hasn’t eaten breakfast yet, Ripa does drink a triple shot skim latte at the host chat desk each day.

Next: Finally time for breakfast

She eats her breakfast after work 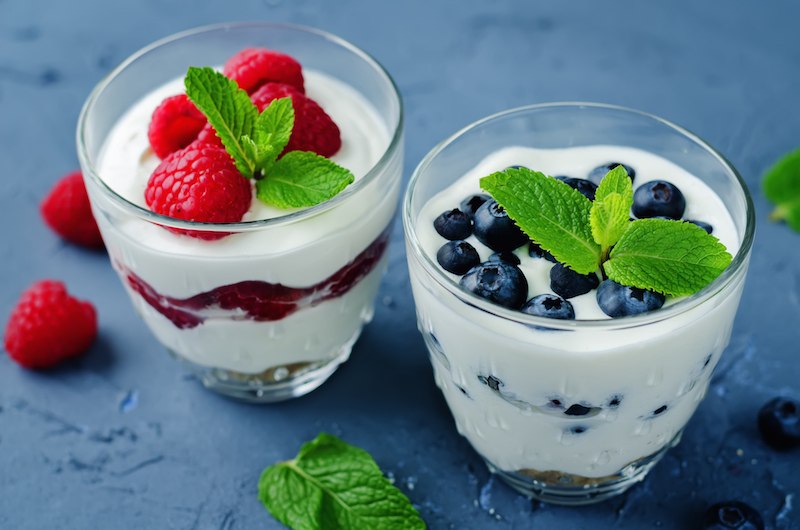 She prefers yogurt as her morning snack. | Nata Vkusidey/Stock/Getty Images

Although she prepares breakfast for her family, Ripa doesn’t eat hers before her morning show. “I never eat breakfast until after the show,” she told Bon Appetit. “I can’t seem to focus my mind if my stomach is digesting … I find that if I eat beforehand, I’m just making digesting sounds.”

After the show ends, Ripa chows down on yogurt. (She prefers the non-fat Greek variety.) “I put honey and granola and make it look like some parfait — it’s a must,” she said.

Next: She gets in a workout.

She works out in the early afternoon When Ripa tweeted out a photo of her toned abs, the Internet was abuzz. One comment, “WOW just WOW!” seemed to sum up the overall response. Everyone wanted to know about her workout routine.

The talk show queen revealed she works out every day. She does so to keep her heart strong and quiet her mind. “I’m usually done with work around 11 a.m., so I have time before I pick the kids up from school. I do it more for my insides than my outside, but the outside gets a nice benefit, too,” she said.

Next: What her workouts consist of

This is what her daily workout consists of Ripa’s trainer spilled the beans on how to get amazing abs: “The first rule is you’re not going to get abs by doing a bunch of crunches,” Anna Kaiser said. “If you want to see your abs, you have to lose fat.” Having said that, many of the best core exercises all derive from planks, she added.

As for cardio, Ripa mixes it up quite a bit. “We do what I would call cardio ballet and power yoga,” she said. “I take spinning classes at SoulCycle, which I love, and I run. I get bored, so I like to mix it up a little bit.”

Next: A different weekend routine She doesn’t get a ton of time with her husband due to her busy schedule. | Kelly Ripa via Instagram

While the family may have a typical, rushed weekday routine, all bets are off on Sunday mornings when Ripa cooks a full hot breakfast. “Mark likes me to make him breakfast in bed. We’re both so busy during the week, I rarely have time,” she said. “But on Sunday, it’s the one time that I can do something nice for him.”

On those more relaxed mornings, Ripa cooks scrambled eggs for the entire family, mixed with cheese and cream. (“They’re not fat free, but they’re delicious.”) Sides include bacon, wheat toast, and coffee with cream.