Dementia and Alzheimer’s (a common form of dementia) are scary diseases that currently have no cure or long-term treatment. Actually, of the top 10 causes of death in the United States, dementia is the only one without any type of treatment available. But does the likelihood of getting Alzheimer’s depend on where you live? Statistics would say yes. Here are the top 15 states with the highest mortality rates from the disease as of 2016*. 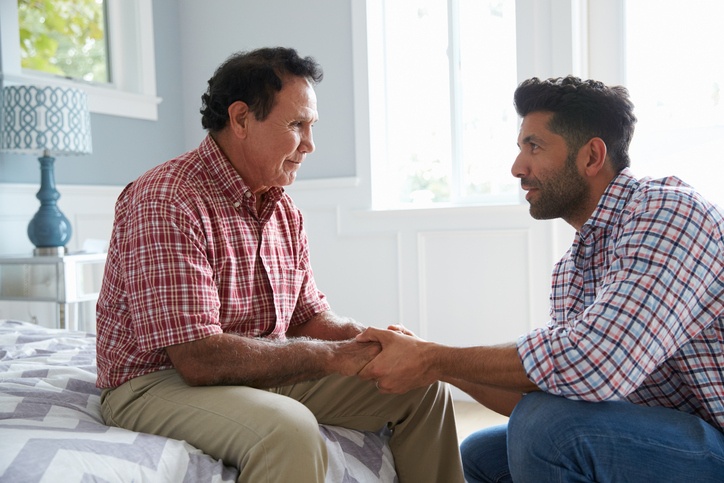 Dementia is a leading cause of death in the United States. | MonkeyBusinessImages/Getty Images

As Vermont’s population ages, the number of residents with Alzheimer’s and dementia will increase. As of January 2018, about 12,000 people in the state had a form of dementia. But according to the Burlington Free Press, that number is expected to increase by 42% by year 2025. The state is under pressure to provide adequate housing for patients with Alzheimer’s to live the most comfortable lives possible.

Next: This state has a large population, so it’s no surprise there are more Alzheimer’s patients and deaths.

According to the Alzheimer’s Association, California might see more than 1.1 million Alzheimer’s and dementia patients by 2030. Data from 2009 suggests that 1 in 8 Californians will develop Alzheimer’s during their life, while 1 in 6 will develop some form of dementia. In 2016, the state saw 15,570 dementia-related deaths, and it’s estimated that about 10% of the nation’s Alzheimer’s patients live in the state.

By 2025, Oklahoma is expected to have about 76,000 residents living with Alzheimer’s — and that’s not including other forms of dementia. With a population of just 3.9 million currently, that’s a surprisingly high number. It currently costs Oklahoma about $481 million annually to care for Alzheimer’s patients, and that number will likely break $600 million by 2025. 1,590 people in Oklahoma died from the disease in 2016.

Next: This state has a low population, but a high Alzheimer’s prevalence.

South Dakota has just 870,000 residents, and 19,000 of them are living with Alzheimer’s or dementia. It’s one of the least-populated states, yet falls at No. 12 out of 50 in the rankings. By 2025, the state is expected to have 21,000 cases of the disease among its residents, according to 2014 data provided by the state. South Dakota had the highest death rate among all states in 2010, so it has improved in that area, but it’s still a state with a high dementia prevalence.

Next: This state has three counties with very high dementia rates.

Visit a doctor when you first notice symptoms. | utah778/iStock/Getty Images

North Carolina saw 4,153 dementia-related deaths in 2016. And according to a report published by Duke University Sanford School of Public Policy, three counties specifically have especially high prevalence of dementia. Union, Mecklenburg, and Iredell counties all have the highest mortality rates related to Alzheimer’s. The state has an overall mortality rate of 37.2 per 100,000.

Next: This state has a large population and a high rate of dementia.

A doctor may conduct physical and cognitive tests to determine your condition. | Seb_ra/iStock/Getty Images

As of March 2018, Texas had about 380,000 residents living with Alzheimer’s or dementia. Texas also has a high rate of unpaid caregivers, such as family or friends dedicating hours of their time to care for dementia patients at no charge. About 1.4 million caregivers have worked a combined 1.6 billion hours of unpaid care at a cost of $20.2 billion per year, according to Texas Health and Human Services.

Next: This is one of the healthiest states — which may explain its dementia prevalence.

Your doctor will discuss the best options for you. | Monkeybusinessimages/iStock/Getty Images

Utah is a healthy state. It has generally low rates of disease, including cancer, diabetes, and heart disease. Yet it has a major Alzheimer’s problem. According to the Deseret News, Alzheimer’s cases in Utah have more than doubled over the past five years, and the rates are expected to increase by 40% over the next seven years. But the state believes its overall good health might be a reason for the high rates. Since people aren’t succumbing to other diseases, they’re living longer. And increased Alzheimer’s rates are directly attributed to a large elderly population.

Next: This state once had the highest dementia mortality rate in the U.S.

A support system is important when battling dementia or Alzheimer’s. | Zhenikeyev/iStock/Getty Images

Washington state has actually improved as far as Alzheimer’s deaths go, since it once had the highest mortality rate in the nation. In 2013, Washington had 46.3 deaths per 100,000, so it has seen a steady drop through the years, but it still ranks at No. 8 on this list. In 2016, Washington saw 3,269 dementia-related deaths. But the state is hoping the rate continues to drop.

Next: This state is not very healthy, which might also contribute to its dementia deaths.

A doctor will help you navigate the condition. | Monkeybusinessimages/iStock/Getty Images

According to the Alzheimer’s Association, there are about 60,000 Alzheimer’s patients currently living in Arkansas, and 180,000 unpaid caregivers caring for them. As of 2016, Arkansas had the seventh-highest mortality rate in the U.S., but the state overall is not very healthy. It ranks third in heart disease deaths, fourth in kidney disease deaths, and fifth in cancer deaths. Arkansas is expected to see a nearly 20% increase in Alzheimer’s cases over the next seven years.

Next: This state might see one of the greatest rate increases in the U.S.

You can still live a fulfilling life in the years after a diagnosis. | Vadimguzhva/iStock/Getty Images

Tennessee saw 3,250 dementia-related deaths in 2016. Also as of 2016, more than 110,000 people in the state were living with the disease. Over 10 years, Tennessee’s dementia rate is expected to increase a whopping 60% — one of the greatest increases in the country. The state’s rate has been steadily increasing over the past few years, and the number will likely only rise over the next few years.

Next: In this state, those with a college degree showed lower dementia prevalence than those without.

It’s important to have a caregiver and confidant after a diagnosis. | Marina113/iStock/Getty Images

Georgia cracks the top five with one of the highest dementia rates in the country. In 2016, the state lost 4,021 people to the disease. Georgia is expected to see a 35.7% increase in prevalence over the next seven years, according to the Alzheimer’s Association, bringing its total cases up from 140,000 in 2018 to 190,000 in 2025. It was found that Georgians who have a college degree showed far less prevalence of cognitive impairment than those without a degree.

With the help of a caregiver, you can continue to do normal tasks. | gpointstudio/Getty Images

Alabama has a much higher dementia rate than the national average and falls in fourth in the 2016 U.S. rankings. Alabama had 86,000 cases of dementia in 2013. By 2025, they will likely have about 110,000 cases. The older population is also expected to increase greatly, which will lead to more prevalence in the state. Alabama cost unpaid caregivers more than $4.2 billion in 2013.

Next: This state ties with Alabama for high rates.

Having family members around to help care for you is good, too. | franz12/iStock/Getty Images

Many states in the south have a high risk of heart-related diseases, such as heart attack, stroke, and diabetes. And a 2017 article published by Reuters discussed the high prevalence of dementia in states with high rates of heart-related illness. The study suggested that those living in southern “stroke-belt” states had a 9% greater prevalence of Alzheimer’s than residents elsewhere — and Louisiana was one of the states with high prevalence. In 2016, the state saw 2,195 dementia-related deaths.

Next: This state has far more dementia deaths between the two Carolinas.

It’s important to continue doing daily activities in the years after a diagnosis. | MilicaStankovic/Getty Images

South Carolina is expected to see a 34.8% increase in Alzheimer’s diagnoses over the next seven years. The state had the second-highest mortality rate in the country in 2016, with 45.3 per 100,000 and a total of 2,481 deaths. It also has thousands of unpaid caregivers who have put more than $4.4 billion worth of unpaid hours into caring for individuals with the disease.

Next: This state has the highest dementia mortality rate in the country.

Life may get more difficult, but there are still little things to enjoy. | CreativaImages/Getty Images

Mississippi ranked No. 1 in 2016 for the highest mortality rate related to Alzheimer’s and dementia. However, over the next seven years, the state is expected to see an increase of about 20.4%, which is lower than many other states with high prevalence. In 2016, 1,485 people died from the disease, giving Mississippi the highest mortality rate per 100,000 in the country.

* Dementia rates courtesy of the CDC.