Death rates from substance abuse are rising at an alarming rate, according to a Journal of the American Medical Association study.

Researchers tracked more than two million U.S. deaths from 1980 through 2014 and found death due to drug abuse rose a by 618.3% nationwide. Alcohol related death,  suicide, and homicide rates dropped in some areas of the country, but had significant increases in others. The rise in “deaths of despair” may correlate to economic turmoil some Americans face and certain populations are fielding multiple symptoms. Which states are hit hardest and which state has the highest death rates of despair (hint page 10)? Read on. 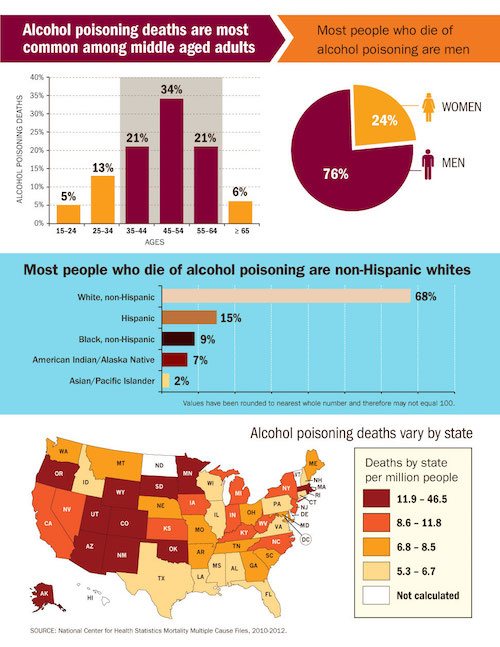 Arizona saw an increase in deaths caused by alcohol and suicide. | National Center for Health Statistics

Sections of Arizona checked two boxes for increases, which includes alcohol related death and suicide. Arizona had the fourth highest rate of death by alcohol poisoning in 2010 and 2012 according to the CDC. Suicide rates among veterans is four times higher than civilians in Arizona, USA Today reports.

Next: This state has a surprisingly high homicide rate.

Maryland had an increase in deaths caused by suicide and homicide. | Kieferpix/iStock/Getty Images

Next: This state is ranked in the top 10 for violent crime.

Homicide and drug related deaths are high in Alabama. The state is the seventh highest for violent crime, according to The Detroit Free Press and has the third highest homicide rate CDC data shows. Although the JAMA study showed an increase in drug-related deaths, the CDC shows a drop for the state in 2016.

Next: Opioids may be to blame for increases in this state.

The state of Virginia had a recent increase in drug related deaths. | Centers for Disease Control and Prevention

Virginia experienced nearly a 35% increase in drug related deaths from 2015 to 2016, according to CDC data. The CDC notes this is considered to be a “significant increase” possibly from the overuse of opioids.

Next: This state has an alarming rate of alcohol poisoning deaths.

Utah has a high rate of deaths by alcohol poisoning. | Bogdanhoda/Getty images

Utah has the seventh highest death rate due to alcohol poisoning, according to the CDC. The state is also grappling with a growing suicide rate amongst teens, which is growing four times faster than the national average, The Salt Lake Tribune reports.

Next: Violent crime is the second highest in the country here.

Here are the findings on New Mexico. | OcusFocus/iStock/Getty Images Plus

Homicide and alcohol poisoning deaths are high in New Mexico. The state ranked second for violent crime according to The Detroit Free Press and sixth for homicide.New Mexico also has the second highest death rate due to alcohol poisoning, the CDC cites. The state also ranked fourth for suicides among veterans, Las Cruces Sun News reports.

Next: This may be the drunkest state in the country.

North Dakota also had a high percentage of deaths that were alcohol-related. | Centers for Disease Control and Prevention

According to CDC data on binge drinking, North Dakota leads the country. Excessive drinking can possibly lead to alcohol poisoning and death.

Next: This state ranks high for alcohol related deaths.

Also, suicide is the ninth leading cause of death for residents in the state, which is higher than the national average, according to the South Dakota Department of Health.

Next: Firearms may be a problem in this state.

Montana came in 7th for deaths by firearms and had a high percentage of deaths by suicide. | Centers for Disease Control and Preventions

Montana ranked seventh for having the most deaths due to firearms, according to the CDC. At the same time, the state had the highest suicide rate in the country in 2014 and has been it the top five for the past 40 years, according to the 2016 Montana Suicide Mortality Review Report. Residents in this state also struggle with alcohol as Montana ranked fourth in the nation for binge drinking, the CDC found.

Next: This state ranks first in a few categories.

Something to think about if you’re looking to move to Alaska. | David McNew/Getty Images

Alaska has the highest rate of violent crime according to reporting by The Detroit Free Press. Perhaps this ranking is due to also being first for having the most gun related deaths in the country, according to the CDC. The state also ranked first for most alcohol poisoning deaths and number five for binge drinking, the CDC reports.

Next: Homicide rates rose in other areas too.

Deaths by homicide were quite common in these states. | ImnatureiStock/Getty Images

Although the national murder rate had a deep decline, certain areas in the south and along the Mississippi Delta rose. Also, pockets in Michigan, Virginia and North Carolina saw an increase.

Next: Some states experienced multiple increases across the board.

12. Western parts of the country were more vulnerable to this

Despite a drop in overall suicide rates, some sections of the U.S. saw increases. “Even though mortality rates from suicides declined for the US as a whole from 1980 to 2014, a majority of counties experienced an increase over this period,” Dywer-Lindgren told Buzzfeed News.

Areas in the western sections of the U.S. like Oklahoma, Colorado, and Utah, for instance, saw dramatic increases. Researchers note many areas have easy access to firearms and low population density, Buzzfeed News reports.

Next: This is why drug deaths are so bad.

13. Researchers believe drug deaths rose because of this

The massive increase in drug related deaths stunned researchers. “The magnitude of some of the differences was still pretty shocking … In the hardest hit counties, there were increases of more than 5000%,” Laura Dwyer-Lindgren, assistant professor of global health at the University of Washington, told BuzzFeed News.

Opioid-related deaths are historically to blame, which points to the crisis reaching epidemic levels, especially for those living in certain areas.

Next: Overall rates declined but spiked in some U.S. cities.

14. Mortality rates increased in some areas due to this problem

This research could prevent deaths and educate those who live there. | OgnjenO/iStock/Getty Images

Although alcohol related deaths dropped nationwide, areas with marked increases were in the northern and western sections of the U.S. This includes countries in states like Wisconsin and Nevada.

Next: Want some good news?

15. Substance abuse and violence decreased in some areas

The report isn’t all bad news. Homicide rates dropped 44.9% and 6% for suicide nationwide. Alcohol-related deaths decreased by 8.1% in the U.S.

While these drops represent the country as a whole, some areas saw spikes in suicide, homicide, and alcohol deaths.