Most guys dream of a career in the NFL, so they collectively thought Carlin Isles was crazy when he walked away from the opportunity after just a matter of months with the Detroit Lions. It’s not that he didn’t have the talent to make it happen. His ability to sprint 40 yards in 4.22 seconds and jump over cars more than prove his athletic prowess, but he realized his home was on the rugby field.

The switch to rugby actually comes at a perfect time as the sport will be making a return to the 2016 Olympics following a 92-year hiatus. And because Isles’s team, the USA Men’s Eagles Sevens, has already secured a spot, he’s facing the chance to accomplish something most NFL players can’t ever hope to do: score a spot on a podium with a medal around his neck.

But that’s getting ahead of things a little bit because Isles is keeping his mind on the regular season for now. We recently spoke to him about his approach to training, staying injury-free, and how he fuels his body for such vigorous efforts on the field. Because food is so important, he regularly reaches for recipes from the Almond Board of California, one of his sponsors. The following is an edited version of our conversation, plus one of his favorite recipes for an on-the-go snack.

The Cheat Sheet: So you dabbled in rugby before heading to the NFL, but ultimately decided to stick with rugby. What led to the switch?

Carlin Isles: Mainly, I just wanted more for myself in my life. I feel like everyone deserves to feel special and I felt like I had a gift that I wanted people to see on a higher platform. I felt like I had a story and I really wanted to inspire people, and show them you can do anything you put your mind to.

I prayed about it and God kind of switched my heart and direction. I had a picture I wanted to paint when I saw rugby. I felt like I could really do something no one had ever done before and live my goals and dreams, and paint that picture how I wanted to paint it.

A lot of people’s dream is to go to the NFL and stay there, but I just felt that if I did that, then what about all the people I could inspire? I felt like if I stuck with the NFL, I would lose that. And the Olympics is one of my main goals, so I had to reset myself, look at myself in the mirror, and ask “What’s your purpose?”

CS: There are a few different types of rugby, the traditional kind with 15 players per team and sevens, which you currently play. What made you want to focus your efforts on being a sevens player?

CI: I played 15s, and you only really get the ball about three to four times in the match, and it’s 80 minutes long. I felt like that wasn’t enough for me to really showcase myself. I just feel alive when I play sevens. I feel happy. I feel excited, and I get to showcase my speed. That’s my high. With sevens, I get that a lot more and I get to express who I am as an athlete. 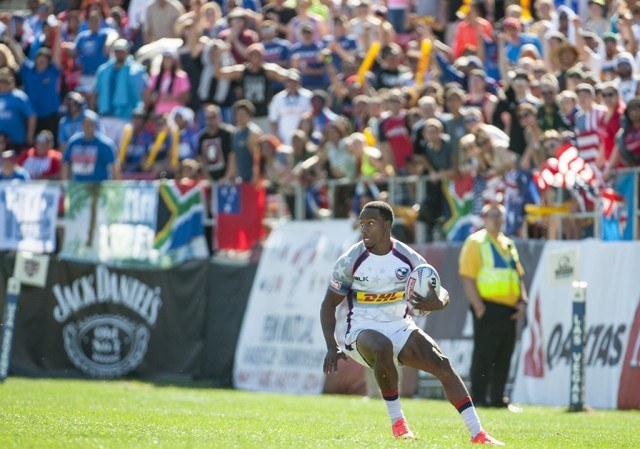 CS: You have some pretty impressive physical stats including your sprint speed and a 62-inch box jump…

CS: A 72-inch one? How do you manage that type of athletic talent? Is it all about natural ability?

CI: A lot of it’s natural, but I really work hard for it. It’s all about doing the work: power cleans and stuff like that to work on explosiveness. Doing things I know are going to help with my vertical, my power output, and my speed. We do a lot of Olympic lifts and box jumps — things like that.

CS: Do you have a specific training plan you follow week to week?

CI: Monday through Friday, I have gym in the morning and do a bunch of upper-body and lower-body exercises. There are different weight and different reps.

CS: Is it mostly strength training? How much of it is heading to the track?

CI: I try to hit the track to do sprints two to three times a week, depending on how much running we do, because we do a lot of running for rugby anyways. And there are different cycles where you’ll work on lighter loads and higher reps where it’s more about speed in the weight room. We’ll do plyometrics: box jumps, single-leg exercises. Then we do our Olympic lifts basically all year round.

Those cycles are different throughout the whole year, but I’m hitting the track, speedwork-wise, about two to three times per week. And I’ll work on my special endurance, pure speed, stuff like that.

CS: How much does food matter? Are you pretty specific about what you eat?

CI: I have a pretty strict diet. I try to eat lean meats, a lot of vegetables, fruits, a lot of water. I have snacks like almonds. I eat a lot of carbs during training because we do a heavy workload. A lot of oatmeal in the morning with some eggs. And, of course, my snacks in between.

I can also be a little bit flexible to eat what I want because I burn so much. But I try to eat as clean as possible.

CS: Does that differ a lot from when you were playing football?

CI: I actually had to up the food a lot because the amount of work we do for rugby is … crazy. The way our bodies are pushed, I have to intake a lot more. I’m eating frequently due to the load and the amount of training we do. It’s intense, so I have to replenish all the time. 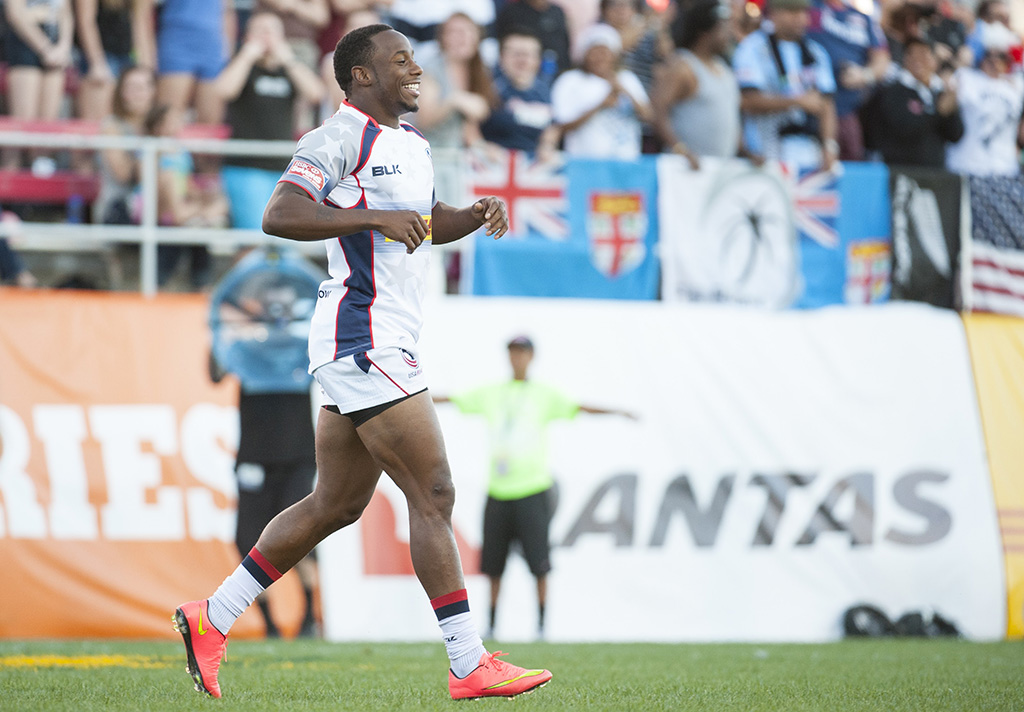 CS: Can you talk a little bit about the team dynamic. Do you feel it’s different from being in the NFL?

CI: I think rugby is a lot more close-knit. There are no egos involved. It’s a lot different than in the NFL where people might be standoffish or think they’re too good. They have a certain amount of team camaraderie, but it’s not fully there.

In rugby, we’re with each other more than we are with our own families, so we have to be close. To get to where you want to be, you have to know your brothers, we call it a brotherhood, in and out.

CS: You’ve known for a while that the team is heading to Rio. Has that changed your training?

CI: It’s the same thing because we still have our rugby season. We can’t even worry about the Olympics right now. It’s been kind of brutal, actually. A lot of people get injured, so it’s a lot tougher. After the season, we have just a couple of weeks off, and then we prepare for the Olympics after that. It’s just about trying to maintain our bodies and make sure we don’t get burned out.

CS: Has it been difficult to avoid injuries?

CI: I’ve been really blessed to not have injuries aside from this ankle one (Isles suffered an ankle injury during a game in mid-April). Someone landed on my ankle, so I got a high ankle sprain. Other than that, I just try to take care of my body as much as I can. I have to do every single little thing every day. All of the little things that are annoying and time consuming.

CS: What sorts of little things do you mean?

CI: A lot of injury-prevention exercises. And you have to sleep right and eat right. I do a lot of glute activation, hip activation, quad activation, and some hamstring work. I work on my inner core and all the little muscles around my body. And making sure I’m walking correctly, which sounds kind of funny, but those little things count.

CS: What does your day look like when you have a competition?

CI: We have to wake up early in the morning and have breakfast. I’ll do my mobility. I’ll stretch and do my activation exercises. I’ll also get some carbs and eat some almonds because I get hungry.

Then we’ll have a blowout. A blowout is right before you go play your first match. We’ll go out and do passing, but we’re running probably 50 to 60 meters, and do some up-downs. Then we’ll do sprints of maybe about 60 to 70 meters. You keep going and do about 12 of them, so you’re basically blowing out your lungs and getting your body tired, pushing it to wake it up and get that second wind. Then when it’s game time, we’re ready to go.

I have to do that. I have to feel fast and make sure my body is feeling fresh. Then we’ll go back to the locker room and I’ll do some work with a foam roller and a few more activation exercises before we go out to play.

CS: You said you’re trying not to focus on the Olympics too much right now, but it must be in the back of your mind. How do you feel about the games coming up?

CI: I’m excited about the games. I don’t even know how to feel because it’s almost like it’s just another tournament. I know it’s a big stage and that it’s important, but I just want to be healthy and be good to go. I can’t believe it’s here. I haven’t really woken up or realized it yet, but I’m excited.

Almond trail mix with dried fruit | the Almond Board of California

This recipe, from the Almond Board of California, is one of Isles’s favorites for travel. He said keeping it in his suitcase or gym bag helps him “snack smart on the go and never get too hungry.”

Directions: Preheat oven to 300 degrees Fahrenheit. In a large bowl, combine almonds, sunflower seeds, and soybeans. Add soy sauce and ginger, then toss to coat. Spread onto a baking sheet, transfer to oven, and bake for 15 minutes, stirring once or twice. Remove from oven and let cool completely. Add dried fruit, toss to combine, and store in an airtight container at room temperature.