The On-Again, Off-Again Celebrity Couples That Are Impossible to Keep Track Of

The only thing worse than hearing that your favorite celebrity couple broke up is the rollercoaster ride they put you through by getting back together — and breaking up, again. No relationships are easy, but these couples have definitely set some records with their relationship tangos.

The following couples have crossed over from will-they-won’t-they territory into the “purely impossible to keep track of” category. One made history as one of the most volatile celebrity relationships of all time (page 14). 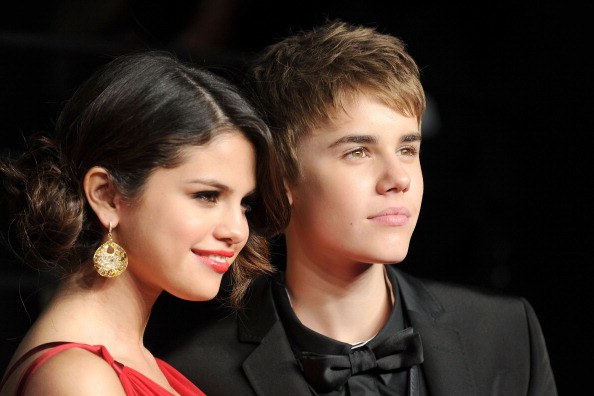 These two have been back and forth since they were teenagers. | Pascal Le Segretain/Getty Images

Just when we thought Gomez and Bieber were history, “Jelena” fans everywhere got a reprise. The couple sparked relationship rumors back in 2010 at their infamous Philadelphia IHOP date. Since then, the two pop artists have given fans everywhere whiplash with how quickly their relationship turns from hot to cold.

They initially debuted their relationship in 2011 at the Vanity Fair Oscar party and remained young and in love until their first split in 2012. Both parties released songs in 2013 that caused great speculation on the Internet as to what the future held for Jelena. In 2016 Bieber was tied to both Hailey Baldwin and Sofia Richie, while Gomez dates rap artist The Weeknd in early 2017. By November of 2017, however, it looks like the couple is back in full force, spotted kissing at Bieber’s hockey game.

Next: This couple may not be able to work due to ‘childish behavior.’

Mellencamp and Ryan dated for three years from 2011 to 2014. The two split in 2014, reportedly because of distance, but were spotted together briefly after their breakup. Mellencamp then dated Christie Brinkley for nearly a year.

However, their relationship is back on as of a few months ago. The couple was spotted together in New York City last March, and again at the Art Cliff Diner in Martha’s Vineyard in May. Despite their recent reconciliation, it’s unclear if the pair will last. A few months before the two were spotted together again, Mellencamp told Howard Stern on The Howard Stern Show that Ryan “hates him to death,” saying, “I think It’s because I’m a child … Everything bad that a fella can be, that’s me.”

Next: This lengthy divorce gave fans hope the couple would stay together.

Affleck and Garner started dating in 2004 after meeting on the set of Daredevil. They married the following year and had three children together before calling it quits ten years later in June 2015.

They announced their divorce in 2015, but what ensued next confused many. The two didn’t officially file for divorce until this past April. While hopeful fans waited for the two to rekindle their marriage, Affleck was recently linked to former Saturday Night Live producer Lindsay Shookus.

Next: This romance is nearly impossible to ‘keep up’ with.

We are pretty sure these two just don’t have what it takes to make it work. | Ethan Miller/Getty Images for AG Adriano Goldschmied

Disick and Kardashian met in 2004 at a house party and began dating immediately. Scott was featured in the first season of Keeping Up With The Kardashians as he and Kourtney experienced a pregnancy scare early on in their relationship.

The two break up for the first time in 2006, They get back together a few months later before having their first child, Mason, in 2009. Over the next few years, their relationship remains on and off. Four years into the relationship, Kourtney declines Scott’s marriage proposal. They have two more kids, Penelope and Reign, and as of 2017, the two are co-parenting but allegedly not involved.

Next: Distance caused the split between these two stars.

Ten years and one child later, Bilson and Christensen have called their marriage quits. Bilson lives full-time in Los Angeles, while Christensen resides in Toronto.

“Yes, they are officially done within the last few weeks,” a high school friend of Bilson told E! News. “It was a gradual buildup of issues and problems. They were in agreement it was time to move on as a couple.” While another source said that they’ve been on the outs for a few months, the split is apparently for real this time.

Next: This engagement inspired years of headlines.

Multiple breakups and an engagement finally caused these two to call it quits … but now they are back on. | Disney

Cyrus and Hemsworth were a couple out of a Nicholas Spark’s novel (literally) when they met on the set of the film adaptation of his book The Last Song.

The two broke up multiple times in 2010 and got engaged two years later. By 2013, they announced their split, effectively calling off their engagement — or so everyone thought. Hemsworth and Cyrus were spotted together on multiple occasions in 2016 and Cyrus put her ring back on and confirmed to Ellen Degeneres that their engagement was back on.

Next: This Instagram couple is always on and off.

It seems that Chloe Grace Moretz (R) and Brooklyn Beckham have figured out how to make it work. | VALERIE MACON/AFP/Getty Images

The actors first met during Paris fashion week in 2014 and began skateboarding around Los Angeles, working out at SoulCycle classes, and attending music festivals. The friends spent most of the year dodging questions about their relationship potential, and in 2015 were rarely seen out together.

Over the next few years, they continued to date on and off, reportedly breaking up immediately following headlines they were moving in together. As of this year, the couple is back on and blowing up Instagram with their adorable photos again.

Next: We still aren’t sure if this couple will ever call it quits. 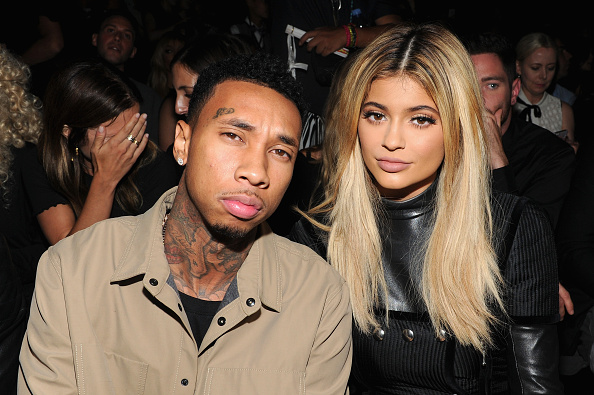 Tyga may be in Kylie’s rearview mirror at this point. | Craig Barritt/Getty Images

Tyga and Jenner were linked as early as 2004 when Tyga, 24, showed up at Jenner’s 17th birthday party. They spark dating rumors based on a few appearances, interviews, and Tyga’s inner elbow “Kylie” tattoo.

Following Jenner’s 18th birthday, Tyga is seen on various episodes of Keeping Up With the Kardashians. The two date on and off until early 2017. Jenner is now linked to rapper Travis Scott and reports of her pregnancy emerged last September. Jenner and the Kardashian family have yet to confirm the alleged pregnancy.

Next: A recent awkward encounter has us wondering what the future holds for this pair. 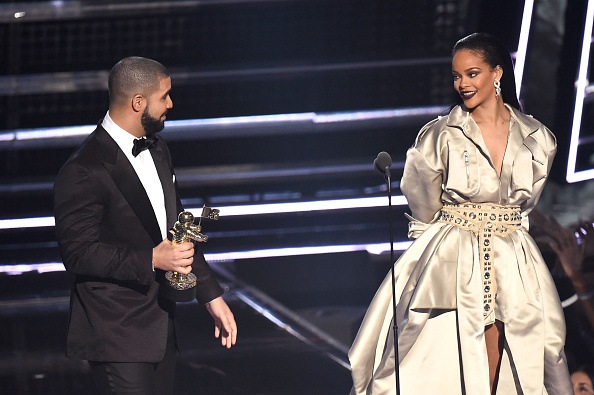 No couple has had more publicly awkward moments than these two. | Michael Loccisano/Getty Images

Ever since Drake announced to the VMAs (and the world) his undying love for pop star Rihanna, the two can’t escape the speculation: Are they friends, or something more?

“We weren’t really sure what it was. I definitely was attracted to Drake, but I think it is what it is — it was what it was … We didn’t want to take it any further,” Rihanna said in 2010 of their history, “It was at a really fragile time in my life, so I just didn’t want to get too serious with anything or anyone at that time.” While they appeared on and off for years, videos recently surfaced of their awkward encounter at a recent party.

Next: Despite bad blood, this couple seems to be on good terms.

The actress and musician first split in 2008, with Adams blaming the paparazzi, among other factors. Moore briefly got back together with DJ AM, but shortly after, Adams posted a public apology to Moore on Tumblr. By the spring of 2009, they were married.

They remained an extremely private couple and finalized their divorce in 2016. A publicist announced their divorce as a “respectful and amicable parting of ways.” The two allegedly have had difficulty settling financial issues. However, Adams took to Twitter and showed his support of his ex-wife’s success with the new NBC drama This is Us.

Next: No horror story here. 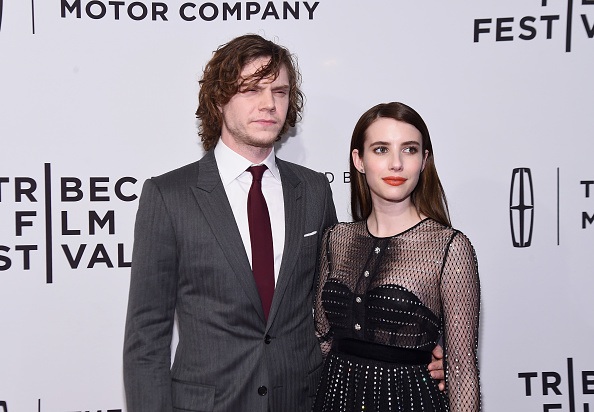 Evan Peters and Emma Roberts met on the set of Adult World in 2012, The Hollywood Take reports. They got engaged in 2014, however, it was short lived. The two called it off within the year.

According to a source, “Their three years together just ran its course.” Peters was spotted at the premiere of Roberts’s show, Scream Queens in 2015. As of October, a source says the two are still “very much together.”

Next: Apartment hunting reports could indicate this couple is reconciling.

The flirtations have never stopped between Jenny Slate and Chris Evans. | YouTube

After dating for a few months, Slate and Evans called it quits earlier this year. “Chris is a very, very famous person,” the 35-year-old actress and comedian said in a March interview with Vulture. “This is what I needed to do to feel normal,” she explained. “To be alone.”

However, as of November, reports that the two were apartment hunting for Evans’ in Tribeca surfaced.

Next: The details of this engagement left the public confused.

Fox met Green on the set of Hope & Faith. She was 18 years old at the time while he was 30. They were engaged a few years later but called off the wedding as of 2009. The two were married by 2010, with Fox saying that they had never actually canceled the wedding.

The two have three kids together. They split up briefly in 2015 before announcing Fox was pregnant with their third child, but reconciled shortly after in 2016.

Next: The most tumultuous love story of all time goes to …

Can you imagine marrying someone not just once, but twice? | William Lovelace/Getty Images

Burton and Taylor met on the set of Cleopatra in the early ’60s and were “immediately smitten with one another,” despite both being married, Taylor to her fourth husband, Eddie Fisher. What followed was one of the most publicized and volatile on-again, off-again relationships of all time.

By 1963, both were filing for divorce from their current partners and waiting to wed one another. In 1964 they engaged in what was called “the marriage of the century,” however, it was only the first of the two weddings the couple would have together. They divorced in 1974 for the first time after Burton had an affair with a co-star. They married in secret for the second time in Botswana in 1975 but split again less than a year later.

Next: The honorary mention for the couple that few thought would ever split.

The split of Brangelina probably caused a lot of people to give up on love. | Jonathan Leibson/Getty Images

Pitt and Jolie, later dubbed “Brangelina,” met and controversially fell in love on the set of Mr. and Mrs. Smith while Pitt was still married to Jennifer Aniston. Pitt and Jolie got together soon after Pitt’s split with Aniston but didn’t tie the knot until 2014.

Jolie filed for divorce from Pitt in 2016, citing irreconcilable differences. She requested primary custody of their six children. The couple’s lawyer, Robert Offer, released a statement: “This decision was made for the health of the family. She will not be commenting, and asks that the family be given its privacy at this time.”