While plastic surgery used to just be for the elite, that attitude has changed over the years. Now, folks from all walks of life are going under the knife to look like the freshest and youngest versions of themselves. The American Society of Plastic Surgeons  reports in 2015, nearly 16 million cosmetic surgeries were performed in the U.S. — and those numbers have only increased since then.

Here’s what’s concerning: Many people aren’t just getting surgery for minor cosmetic procedures. It turns out a number of folks are aiming to look like their favorite celebrities. And these extreme cases prove how easy it is to take things too far.

We all know Jessica Rabbit as being Roger Rabbit’s curvaceous wife — but some people are a little too inspired by her image. Pixee Fox, a North Carolina native in her late 20s, has had 19 cosmetic surgeries to look like the cartoon character, Daily Mail Online says. She spent over $100,000 in surgeries thus far, which included removing six ribs for a tiny waist and getting implants for her eyes to turn them an unnatural shade of green. Currently, her waist is at a mere 16 inches to give her body an exaggerated hourglass shape.

Next: This woman believes she was an ancient Egyptian in a past life.

She’s not a living celebrity today, but we’re all familiar with Queen Nefertiti’s legacy. While most of us are content going to a history museum to learn about this Egyptian queen, Nileen Namita, now in her 50s, decided she wanted to look like her, Daily Mail Online reports. With over 50 cosmetic surgeries under her belt spanning over the course of 20 years, she believes she now represents the ancient beauty.

Nileen’s cosmetic work includes eight nose jobs, three chin implants, facelifts, and eye and lip surgeries, among other small procedures. She also believes she’s the reincarnation of Queen Nefertiti — so it’s only fitting she now attempts to look like her.

Next: This celebrity’s half-sister even went to extremes.

Lindsay Lohan is no stranger to the dark side of fame — but this time, it’s her half-sister getting the attention. Ashley Horn reportedly had $25,000 worth of surgery done to look like her famous sibling. Her cosmetic work includes a nose job, cheek fillers, jawline surgery, and fat injections, NY Daily News says.

As far as Ashley and Lindsay’s father is concerned, he considers the plastic surgery “nuts and sick and stalkerish. What mother would let her 18-year-old daughter get surgery like that?” he fired back.

Next: This man spent thousands to represent his favorite pop star.

Bryan Ray has gained a following due to his resemblance to Britney Spears. | Brian Ray via Instagram

We’ve followed Britney’s ups and downs in the pop culture world for years now. And 31-year-old Bryan Ray from Los Angeles has taken his love for the star to extremes. Cosmopolitan reports this super fan has spent over $80,000 on 90 cosmetic surgeries to look like Britney, and these include Botox treatments, fat injections, a nose job, lip fillers, and laser hair removal.

And Bryan’s love for Britney doesn’t stop at his looks — he’s even been to every single one of her tours and performs her dance choreography in nightclubs.

Next: These twins will stop at nothing to look like this movie star.

You may remember these infamous twins back on MTV’s I Want a Famous Face. YourTango reports Matt and Mike Schlepp had big dreams of looking like Brad Pitt, so they dropped thousands of dollars to make it a reality. They both went in for surgery to get nose jobs, jaw and chin implants, and cheek operations. They also improved their smile with many porcelain veneers.

Though their operations made it difficult for them to eat at times, they claimed they were healthier and happier than ever after the surgeries.

Next: This woman had the same name as this star — so why not try to look like her, too? 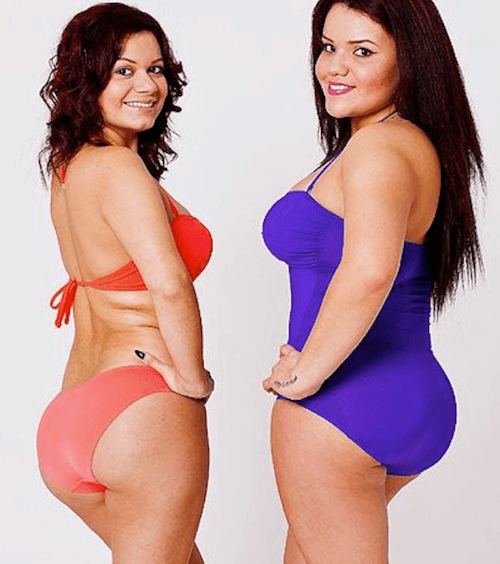 They were able to transform themselves into their favorite celebrity. | YouTube

At just 15 years old, this teen wanted to look like the star who shared her name — and her sister jumped on board, too. The Huffington Post reports Jennifer Lopez (the non-celebrity) flew to Colombia, her home country, to have liposuction, breast implants, and buttock fillers all in one day.

Karen, Jennifer’s sister, also had the same surgeries done — but she’s not too happy about all the attention. Karen says men flock to her thanks to her noticeable backside, and it’s not always wanted.

Next: Here’s another commoner who wanted to look like the infamously curvy cartoon character.

It seems Jessica Rabbit is a popular suggestion amongst patients in plastic surgery clinics. Daily Mail Online reports Annette Edwards, now in her 60s, spent over $13,000 in plastic surgery to look like this character. The work includes a breast uplift, brow lift, chin implants, and Botox along with extremely strict dieting.

As for why Annette wants to go for this extreme look, she says her love of rabbits made her want to commit. She’s the owner of Alice, the largest rabbit in the world, and breeds the animals for a living.

Next: Unhappy with her nose, this woman went under the knife to look like a famous actress.

At 41 years old, Deborah Davenport wasn’t too pleased with her facial features — especially her nose. She decided she wanted to look like Kate Winslet after looking through movies and magazines for inspiration. For a mere $15,000, she had her nose cartilage shaved, cheek injections, and Botox around her forehead and eyes, The New York Times reports.

Next: Of course there are people paying to look like this voluptuous star.

He has additional procedures already in mind. | Jordan James Parke via Instagram

It wasn’t just Kim who inspired Jordan, either — he chose Kylie for his chin surgery inspiration. And though doctors and his family have warned him against having more surgery, it seems he’s not finished yet with going under the knife.

Next: This model has spent sky-high amounts to look like Kim K, too.

It turns out Jordan James Parke isn’t the only one with dreams of looking like Kim Kardashian. According to news.com.au, model Jennifer Pamplona has had more than $240,000 worth of work done. This includes butt implants, liposuction, rhinoplasty, and the removal of four ribs for a tiny Kardashian-esque waist.

Jennifer says people on the street regularly confuse her for the superstar, which she absolutely loves.

Next: This man was actually refused more surgeries by doctors.

He has yet to find his abs of steel. | Herbert Chavez via Instagram

Superman may not exist in real life — but for Herbert Chavez, he certainly tries his best to look the part. Daily Mail Online reports he’s gone through 23 surgeries over the course of 18 years to look like the superhero. Going under the knife for him has included nose jobs, skin whitening, liposuction, jaw realignment, and fillers. He even wears blue contacts to look more like Clark Kent.

Here’s the scary part, though: Doctors have refused Herbert’s request for having “abs of steel” after they found he was injecting himself with poisonous, illegal fillers. The fillers caused him to develop spots and bumps all through his body.

Next: He was known for his plastic surgery obsession, but now he’s deceased.

The Los Angeles Times reports Toby Sheldon wanted nothing more than to resemble his favorite pop star, Justin Bieber. While he underwent typical surgeries such as liposuction, lip fillers, and fat injections, he also had at least six hair transplants to get that signature Bieber ‘do. His surgeries, in total, ran him at least $100,000.

In 2013, Toby told Bethenny Frankel that only death would stop him from more surgical modifications. Oddly enough, he passed away in 2015 from reasons unrelated to his cosmetic work.

Next: This man looks startlingly like the King of Pop himself.

We all know Michael Jackson is no stranger to plastic surgery — so of course an impersonator of the King of Pop would undergo such procedures as well. Mikki Jay, a middle-aged mom of three, has spent well over $13,000 to look like the star. Her surgeries included a nose job and chin and cheek alterations to achieve that signature Jackson face, says The Sun.

While most of us are wondering why you’d ever want to look as severe as Michael Jackson, Mikki says she makes over $100,000 a year working as the impersonator, so she’s happy with the results.

Next: Would you spent this much time and money to look like this iconic pop artist?

There are few pop stars as iconic as Madonna, and this super fan decided he’d spend nearly $200,000 to look like her. Adam Guerra had 18 cosmetic surgeries done, which included cheek and jaw surgery and Botox injections. Surgery aside, he’s also spent at least $100,000 in costumes and jewelry to match Madonna, The Huffington Post reports.

So, why Madonna? Adam says “she was the one everybody wanted to be,” and he loves her individuality.

Next: This woman couldn’t wait to look like her favorite movie star.

After Kitty had her daughter, she didn’t feel nearly as comfortable in her body — and that’s when thoughts of plastic surgery came into play. The Huffington Post explains she had six plastic surgeries to look like one of her favorite stars, Jennifer Lawrence. After $25,000 spent, she had a breast augmentation, liposuction, rhinoplasty, and fat injections in her cheeks.

Kitty’s extremely happy with her post-surgery self, though her husband said he doesn’t have particularly strong feelings about J Law’s looks either way.