Politicians Whose Careers Were Almost Ruined by Scandalous Problem Children

Political scandals have occurred since the dawn of time (or, for Americans, 1776). Well-liked politicians rise in the polls based on their well-versed speeches and intelligent approaches to policy. Others find that past demons rear their ugly heads to take down their campaign, or face an election season slip-up that ruins their career.

What happens when the politician makes little errors compared to those of their children? While their political abilities shouldn’t be determined based on their kids’ mistakes, these politicians’ campaigns may have been influenced by their children’s scandals.

Bristol Palin, 17 at the time, became the subject of intense media scrutiny when her teenage pregnancy was announced during her mother’s run for Vice President in 2008. Bristol attracted a lot of attention when in February 2009 she told Fox News that abstinence is “not realistic at all,” but that she would like it to become more accepted by people her age.

Next: This president is no stranger to scandal.

Both Donald Trump Jr. and his younger brother Eric Trump were the subject of controversy when photos surfaced from their 2012 African hunting safari. Donald Jr. posed beside an endangered leopard he had shot among other animals.

The safari was legal, however public outrage was widespread. At least one sponsor dropped from Celebrity Apprentice, the reality show Donald Jr. appeared on alongside Donald Trump.

Next: This politician’s son was caught driving with over five different substances.

He was caught with drugs in his vehicle. | Andy Kropa/Getty Images

The son of former Vice President Al Gore, Al Gore III, was 24 when he was pulled over for driving 100 miles per hour on the San Diego Freeway at 2:15 in the morning. The deputy found less than an ounce of marijuana and prescription pills including Vicodin, Valium, Xanax and Soma, and Adderall, none of which Al III had a prescription for.

Al II was taken to a Santa Ana jail and faced four drug charges as well as a speeding citation. The 2007 incident occurred only four years after he was pulled over in Maryland and went to rehab after officers found marijuana in his car.

George W. Bush’s twin daughters, Jenna and Barbara, were arrested and accused of trying to order margaritas at an Austin, Texas restaurant despite being under the legal drinking age.  The police were called to a Tex-Mexican restaurant by the manager who reported minors were trying to buy alcohol.
Jenna was cited for showing someone else’s ID to buy drinks, and both Barbara and a friend were caught for possession of alcohol. This wasn’t the first incident for Jenna; only a few months prior she pleaded no contest to a charge of possessing alcohol under age at an Austin nightclub. She was ordered to pay $51.25 in court costs, serve eight hours of community service and attend six hours of alcohol awareness classes for the initial charge.
Next: This president’s son would eventually become president too, but was still a problem child.

His son could have hurt his image. | Michael Loccisano/Getty Images for HBO

It turns out that Jenna and Barbara Bush may have taken a page out of their father’s book. While George W. Bush’s father, George H. W. Bush was pursuing various government roles, Bush was in what he called his “nomadic” years.

The future President of the United States partied, was unemployed for month-long periods, and reportedly confronted his father one night when drunk and challenged him to a fight.

Next: The senator’s daughter put rumors to rest.

His daughter is quite conservative, but also has unexpected views. | Dimitrios Kambouris/Getty Images

John McCain’s 27-year-old daughter Meghan faced plenty of media scrutiny during his run for president in 2008. In an interview with Playboy magazine, Meghan refrained from revealing in photos but bared all during an interview.

Facing questions about her sexuality, Meghan told Playboy, “I’m not a lesbian if that’s what you’re asking.” She went on to say that she’d, “Be the first person to tell the world I was gay. I’m not private about anything … But I’m strictly d–kly. I can’t help it. I love sex and I love men.” Meghan, who had previously registered as Independent, changed her party to Republican in 2008 out of support for her father while remaining an advocate for gay rights.

Next: This president’s daughter was estranged for a while. 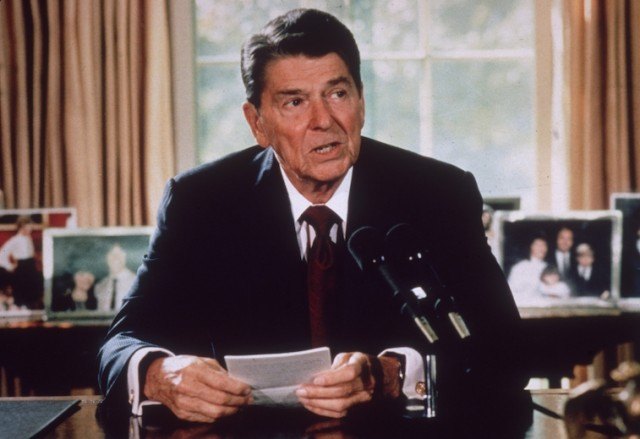 Patti Davis, daughter of Ronald and Nancy Reagan, admittedly struggled with addiction from the time she was fifteen. Davis posed for Playboy at age 42 as well, noting, “I am proof that it isn’t that easy to die, because from the age of 15, well into my twenties, I was working on dying. Most addicts are.”
Davis published an autobiography, The Way I See It, that many felt was her disapproving take on the Reagan family. Davis disclosed that her mother, who was telling the country to “Just Say No” to drugs, was regularly taking prescription tranquilizers and sleeping pills. “What I witnessed was a problem,” Davis said in an interview.

Next: This president encouraged his daughter’s activism.

Amy Carter, daughter of Jimmy Carter, 39th President of the United States, was a vocal activist and political left-winger.  She protested regularly and took part in several sit-ins aimed at ending apartheid and American intervention in Central America.

Amy, 17, was participating in a protest that had become almost a daily routine at the embassy. She was arrested after being refused entry and ignoring police instructions. The charges against her were later dropped.

Next: This mayor’s daughter used the five-finger discount.

She was charged with theft. | Brendan Hoffman/Getty Images

Rudolph W. Giuliani is a former New York City mayor and current informal adviser on cybersecurity to the White House. Giuliani’s daughter Caroline was arrested at 20 years old after the employees of an Upper East Side Sephora caught her stuffing makeup worth more than $100 into her coat pocket, law enforcement officials said.
A spokeswoman for Mr. Giuliani said the former mayor, “[asked] the media to respect the privacy of his daughter at this time.”
Next: This infamous president had a well-known “wild child.”

Teddy Roosevelt is known for his progressive policies and incredible accomplishments and has been ranked among the five best U.S. presidents of all time. His daughter, on the other hand, has been referred to as the “poster child for wild presidential children.”

Alice Roosevelt was known for smoking, gambling, chewing gum, and wearing pants in a much more conservative era; a friend of her stepmother’s described Alice as “a young wild animal that had been put into good clothes.” Teddy Roosevelt was quoted saying, “I can run the country or attend to Alice. I cannot possibly do both.”

Next: Trump has had more than one child make headlines.

Ivanka Trump, the oldest daughter of President Donald Trump, faced public scrutiny multiple times based on the practices of her clothing line, Ivanka Trump. The first accusation came in 2011 when designer Derek Lam sent a cease-and-desist letter to Ivanka for allegedly copying his designs and again in 2016 when popular shoe brand Aquazzura shamed her on Instagram.

Ivanka’s brand faced a few other issues. PETA made headlines criticizing her fashion line’s use of fur from rabbits allegedly raised, slaughtered and skinned in China. In 2016 the U.S. consumer safety authority recalled around 20,000 Ivanka Trump-branded women’s scarves over concerns they could catch fire and injure their wearers.

Next: This founding father had a reckless stepson.

James Madison’s son caused quite a stir in his life. | National Archive/Newsmakers/Getty Images

James Madison’s step and adopted son, John Payne Todd, was known for his difficult adolescence. Todd was believed to be an alcoholic and was repeatedly jailed for shooting incidents. He was reportedly constantly in debt for gambling and needed his parents to bail him out of debtors’ prison.

Todd’s antics reportedly left Dolley Madison broke after James Madison’s passing. Dolley saved herself from bankruptcy by selling some of her late husband’s papers to Congress. The payment was delivered to her as an annuity so that her son couldn’t get his hands on the money.

Next: This politician’s daughter used a fake name.

Former governor Jeb Bush’s daughter Noelle was in the news countless times for her drug abuse problems. In 2002 she was arrested for filing a Xanax prescription under a fake name and sent to rehab in Orlando.

While in treatment at the Center for Drug Free Living, police were called in response to cocaine that workers found in her shoe. She was sentenced to 10 days in jail for the offense.

Next: This First Son fought with his brothers for his wife’s hand in marriage.

The popular president’s son had quite a reputation. | White House

John Adams II was the son of John Quincy Adams and the grandson of John Adams. However, he didn’t follow the path to the presidency. He allegedly gained a reputation as a coward for refusing to fight back when slapped around by a political rival at a White House party, and the constant harassment he received drove him into alcoholism.

John Adams II battled both his older and younger brothers to marry their first cousin Mary Catherine Hellen. John married Mary Hellen in 1828 at a ceremony in the White House, and both his brothers reportedly refused to attend.

Next: This 1800 president had a controversial son.

His son was known for his wild lifestyle. | Hulton Archive/Getty Images

John Van Buren, son of Martin Van Buren, the eighth President of the United States, became a prominent politician in his own right. However, he was a notably controversial child.

John loved to party, was known for being a drunk, and was rumored to be a heavy gambler. He even reportedly danced with Queen Victoria in 1838.