Prince William and Kate Middleton: Fascinating Details You’d Be Surprised to Learn About Their Relationship

You may think you know everything about Prince William and Kate Middleton’s relationship. They are high-profile royalty, after all. But interestingly enough, there are details about their union that aren’t as well known. Think you’re up-to-date on the Duke and Duchess’ relationship? Some of these details may surprise you.

They used to be roommates!

They had a chance to live with each other before tying the royal knot. | Arthur Edwards/Getty Images

It’s well documented that William and Kate are college sweethearts, meeting while they attended the University of St. Andrews. But what many people aren’t aware of is that they spent a quick stint as roommates. It was reported in 2002 that Prince William was moving into a nice flat with three friends, one of which was his suspected new girlfriend, Kate Middleton. Although, the two were already an item long before this living arrangement. (More on that a little later.)

Next: The curious case of the mystery baby.

They didn’t know their baby’s gender

A thoroughly modern couple, the Duke and Duchess of Cambridge have broken many royal traditions during their union. They did not stray, however, when it came to the birth of their first born child. William and Kate stuck to tradition and did not reveal the baby’s due date, nor was his gender revealed. In fact, it is believed that the couple didn’t know the gender themselves, and that is was kept a secret from them until Prince George was born.

Next: Did they leave the Queen out of the loop?

The Queen was the last to know about their engagement

This sounds ludicrous, right? Isn’t the Queen supposed to be the first to know these things? Heck, the Queen has to give her permission to the first six royals in line for the throne before they can get married! But as fate would have it, Prince William proposed to his future wife while on a trip in Kenya in October of 2010. Queen Elizabeth found out about the engagement on November 16 — just a few hours before it was announced to the public.

Will and Kate dated for a long time without anyone knowing

Just about everything the couple does nowadays is under a public magnifying glass. But when they met in college, they were able to begin dating secretly. As one college friend told CNN ahead of the royal wedding, Prince William and Kate Middleton were able to begin courting without the public knowing because of a media blackout that was in place. It also allowed for Prince William to attend school and walk around town as though he was your average everyday college student.

Next: The breakup heard round the world.

Why their infamous 2007 split was so short

They just couldn’t stay away from each other. | Giphy

Avid fans of the royals surely know about when the young duo broke up for a brief stint in 2007.  So brief, even, that it didn’t last more than a few months. Although Prince William was not quite ready to get married — and reportedly had plenty of women hanging on him — he reportedly realized his mistake in letting Kate go very shortly after their split. Miss Middleton, on the other hand, hit the town as a single woman, wearing racy outfits you wouldn’t see her dawn now that she’s a Duchess.

Next: Who wouldn’t want their face recreated by pizza toppings?

Their wedding was celebrated by a … pizza?

The Royal Wedding took the world by storm in 2011. Excitement over the event was so great, that banks declared it a national holiday and businesses began selling commemorative merchandise. One of the most extreme odes to the newlyweds was, of course, the pizza to end all pizzas. American-made Papa John’s hired an artist from the United Kingdom to help create a “Will and Kate” pie, complete with a mushroom wedding veil and a suit made out of salami.

Next: While we’re on the subject of food …

You can still have a slice of their wedding cake

Their cake will go down in history. | Giphy

It was no shock that the wedding cake was a masterpiece, made of eight tiers of brandy-soaked goodness. (How could the biggest wedding on the planet not have an out-of-this-world cake, right?) The cake apparently has a long shelf life, too. A slice of the decadent dessert went up for auction in September of 2017 — six years after the Duke and Duchess said “I do.” The New York Post reported in September that the slice was auctioned for 638 pounds, close to $840.

Next: Age is just a number … unless you’re marrying a future king.

Kate is the oldest royal bride 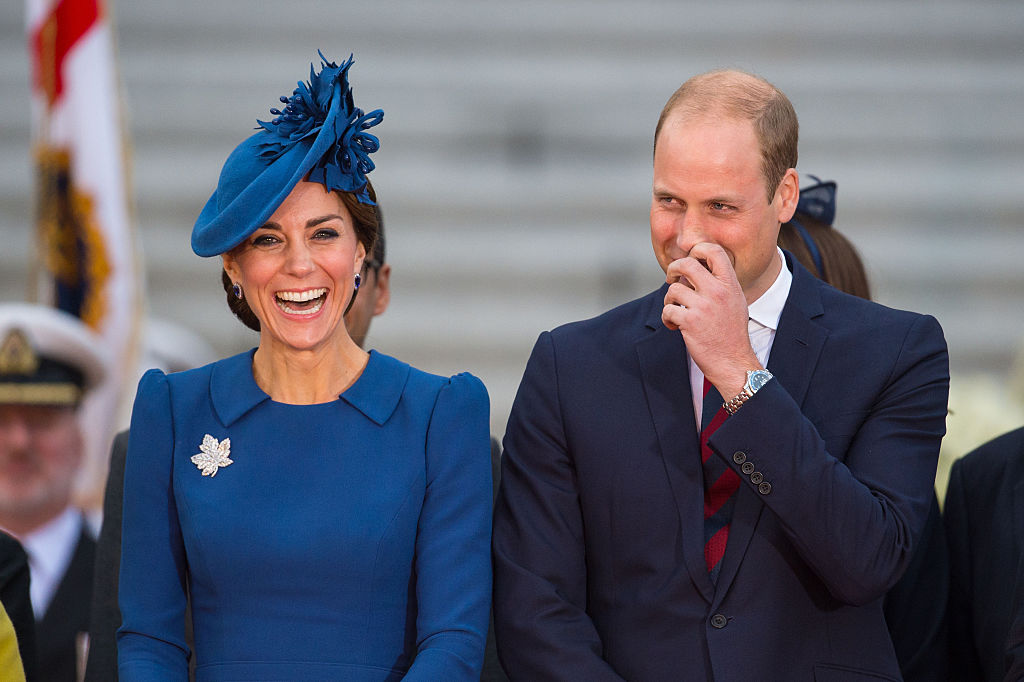 Getting married in your late 20s seems pretty expected by modern day standards. But by royal family standards, Kate Middleton was over the hill. At 29-years-old, seemingly-youthful Kate was the oldest bride to marry a king-in-waiting. (Princess Diana, for example, married Prince Charles when she was 20.) The only royal brides older than Duchess Catherine were divorcees — one of which is The Duchess of Cornwall, who was 57 when she married Kate’s father-in-law, Prince Charles.

Next: One of the many traditions Prince William broke.

When Will drove Kate home from the hospital

He took the liberty of getting the baby safely home. | Giphy

When it comes to breaking royal traditions, Prince William’s late mother, Princess Diana, was the poster child. But the heir to the throne has broken a few rules himself, particularly when it came to the birth of his first child. Prince William and Kate followed in Diana’s footsteps, with Kate giving birth at St. Mary’s Hospital in London instead of having a home birth. Prince William even went a step further in not having the royal security aides drive his family home — by setting up baby George’s car seat and driving the family to Kensington Palace himself.

Next: But before George, there was another baby at Kensington Palace.

The truth about the family dog

The duke and duchess like to include their pets in official family photos. | Michael Middleton WPA Pool/Getty Images

The Royal Family has always been keen on dogs. (How many corgis does the Queen have again?) So it probably wasn’t too much of a surprise when Prince William and Kate Middleton adopted one of their own. The black cocker spaniel, named Lupo, was actually bred from a dog owned by Duchess Catherine’s parents, Michael and Carole Middleton.

Next: The mystery of the prenup lives on.

Is there a prenup?

A tricky thing for either one of them to have brought up. | Giphy

Just call it one of the many mysteries surrounding this royal couple. There are conflicting reports as to whether Kate Middleton is the first royal bride to sign a prenuptial agreement. Reports around the time of the 2011 wedding said that she and Prince William did not sign a prenup, despite the high divorce rate in the Royal Family. Rumors have swirled in more recent years that she has signed a prenup, but it’s difficult to say how true the allegations are.

William couldn’t sleep before the wedding

Aside from being excited about the big day, fans kept William up all night. | WPA Pool/Getty Images

It wasn’t just pre-wedding jitters that kept Prince William awake the night before his wedding. The festivities surrounding his nuptials were so insane, that there were crowds outside of his residents cheering and singing until all hours. He is rumored to have only gotten a half hour of sleep.

Next: The new royal does her own primping.

Kate did her own wedding makeup

That ring. That veil. And of course, that dress. With all the majesty surrounding the Royal Wedding, it’s hard to believe that the pampered bride-to-be would be doing any of the pre-ceremony prep herself. In fact, it is reported that Kate did her own makeup on the big day.

Next: A very well thought out bouquet.

Maybe it was a coincidence — or maybe it was planned that way for fans to fawn over for decades to come. Whatever the reason, two of the flowers in Kate’s wedding bouquet were all-too perfect for the bride and groom, conveniently named Lily of the Valley and Sweet William. (The flowers stand for several things. But it isn’t clear if that much thought was put behind the pretty, understated bouquet.)