The world of fitness constantly evolves, adopting new techniques designed to deliver the optimal workout. A few decades ago, CrossFit would have seemed completely absurd. Now, it’s pretty standard to have a handful of friends who regularly perform handstand push-ups and tire flips. Even guys who prefer a more classic approach to hitting the gym should consider changing things up.

Pull-ups are a perfect example. This exercise has been around for ages, and it isn’t going to disappear off trainers’ recommended moves any time soon. After all this time, pull-ups remain one of the most effective ways to build upper-body strength. There comes a point when you might find your results lagging, though. Doing 30 repetitions might sound impressive, but it’s not the best way to go. Performing the same exercise so many times without adding another element of challenge won’t help you get much stronger, and you could even suffer an injury from overtraining those muscles.

If you’re ready to take your pull-up game to a new level, try adding some alternatives to your usual workout. Try these different pull-up styles to give your strength program the boost it needs. You’ll get stronger and avoid the boredom that typically sets in when your workout becomes repetitive; that’s what we call a win-win. 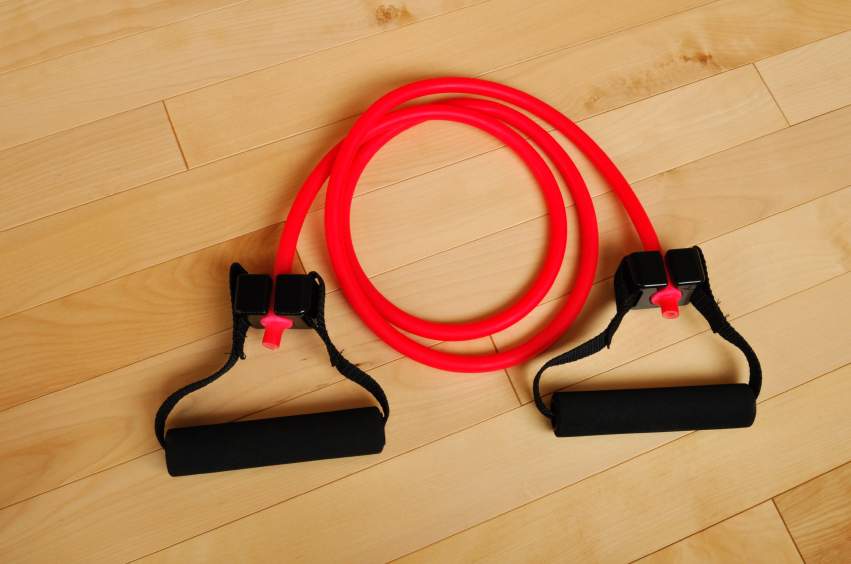 Resistance band pull-ups will give you a challenge. | iStock.com

One of the most obvious ways to make any exercise harder is to add, or increase, the load. Strapping some weight around your midsection while performing pull-ups is an option, but using resistance bands might be an even better choice. Breaking Muscle explained using resistance bands makes the pull-up harder as you get closer to the top, which is great for developing speed and power. And like the basic move, it will challenge your arms, back, and shoulders.

You can perform band resisted pull-ups a few different ways. The first involves attaching two bands to the structure you’re using to create two loops on either side, which Breaking Muscle demonstrates. Cross each loop of band over your head so the band from the left side is over your right shoulder and the band from the right is over your left shoulder. You can also wear a belt and loop a resistance band through it, as shown on T Nation. Attach both ends of the band to a large barbell set on the floor. With either setup, perform pull-ups as you normally would. 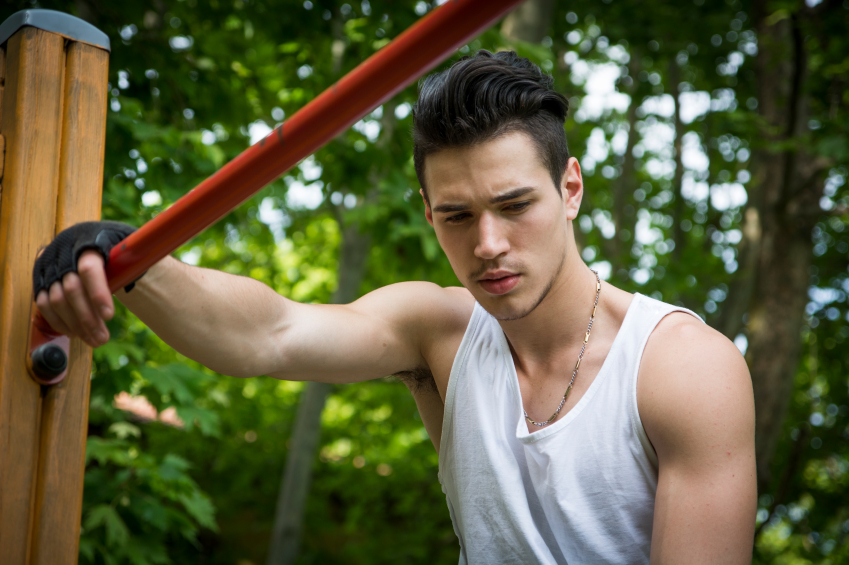 Don’t be afraid to try the difficult cliffhanger. | iStock.com

It’s always a good idea to have a few moves in mind for times when you may have limited access to gym equipment. Mark Perry, CSCS and creator of BuiltLean, says on the website cliffhangers are a great choice for guys who have mastered the basic pull-up and need to make the move more difficult when they don’t have access to weights. This means you can do them just about anywhere. This variation is performed facing sideways with most of your effort focused on the arm closest to the bar you’re gripping, which will drastically increase your effort.

To do this alternative move, stand underneath a pull-up bar with your left side closest to the bar and your chest aligned perpendicular to it. Grasp the bar with your left hand, thumb facing backward, then set up your right hand in the same way directly in front of your left hand. Using mostly your left arm and back, pull yourself up until your chin comes above the bar, then lower back to the starting position. 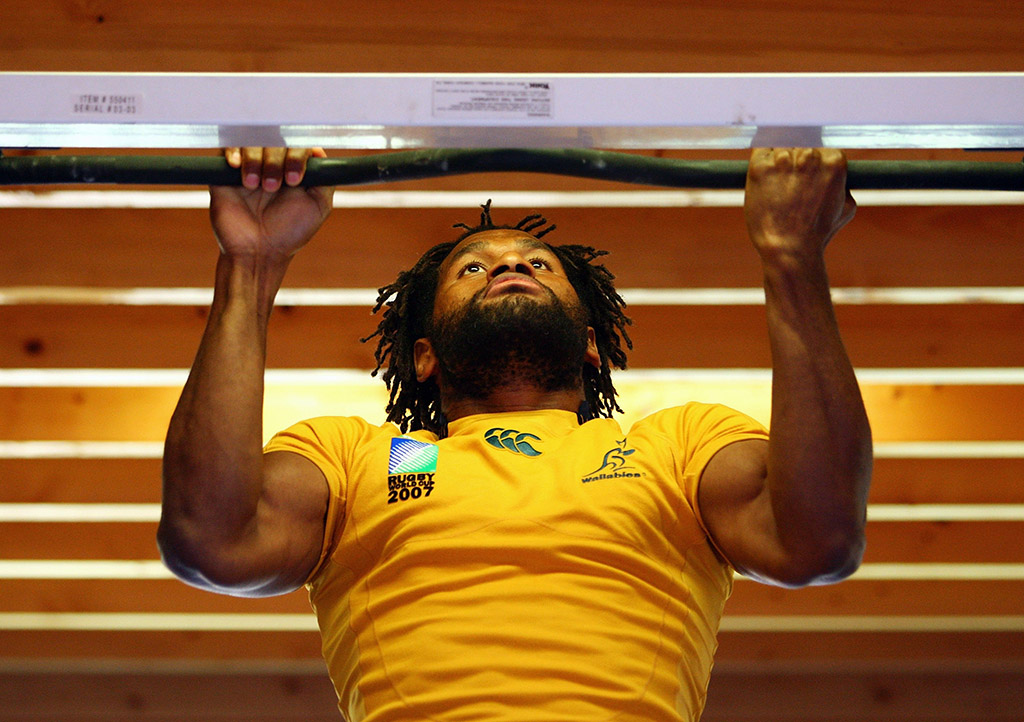 A mixed grip pull-up can only be done by the very strong. | Cameron Spencer/Getty Image

We tend to think of upper-body exercises as symmetrical moves that work each arm in the same way. While it’s a good strategy most of the time, an uneven setup can actually be beneficial in certain applications. Mixed-Grip pull-ups are one of the best examples. This move positions one hand with an overhand grip and the other with an underhand grip to force your core to stabilize your body during the move, according to Men’s Health.

Of all the variations featured, this one is probably one of the most straightforward. You’ll perform pull-ups as you normally do, but one palm will be facing you and the other will be facing forward. Check out Muscle & Fitness to get a better sense of the correct form. 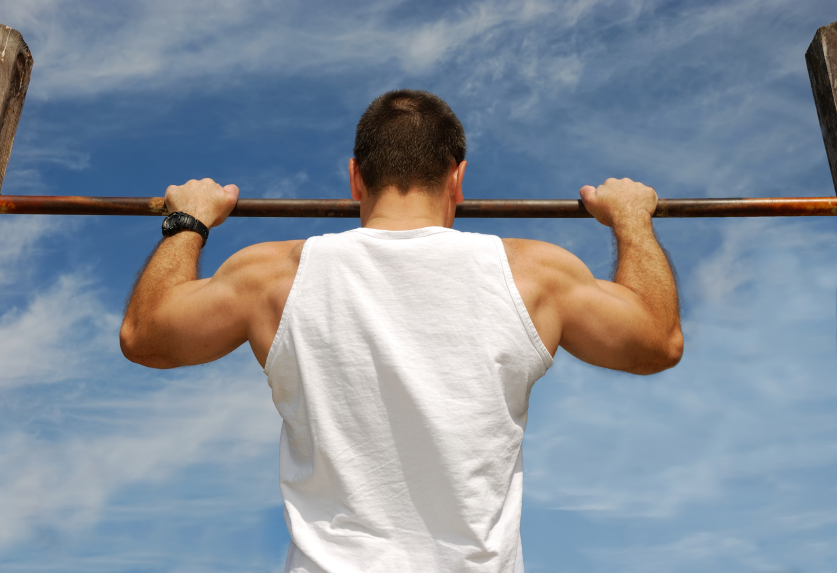 A wide grip pull-up will target your back muscles. | iStock.com

If you’re trying to find a better way to target your back muscles, a simple change in your pull-up form is all you need. By positioning your hands further apart, most of the load will be forced onto your lats while your arms play a supporting role. While having strong back muscles has some obvious aesthetic advantages, these muscles are also important for everyday activities. According to Livestrong, well-trained lats make it much easier to get out of a seated position.

As you set yourself up for this move, position your hands on the bar so they are wider than shoulder-width apart. From there, focus on pulling yourself in a straight line all the way until your chin rises above the bar, then lower yourself down to the starting position. This move can be quite a bit more challenging than regular pull-ups, so don’t be surprised if your number of repetitions is much lower. 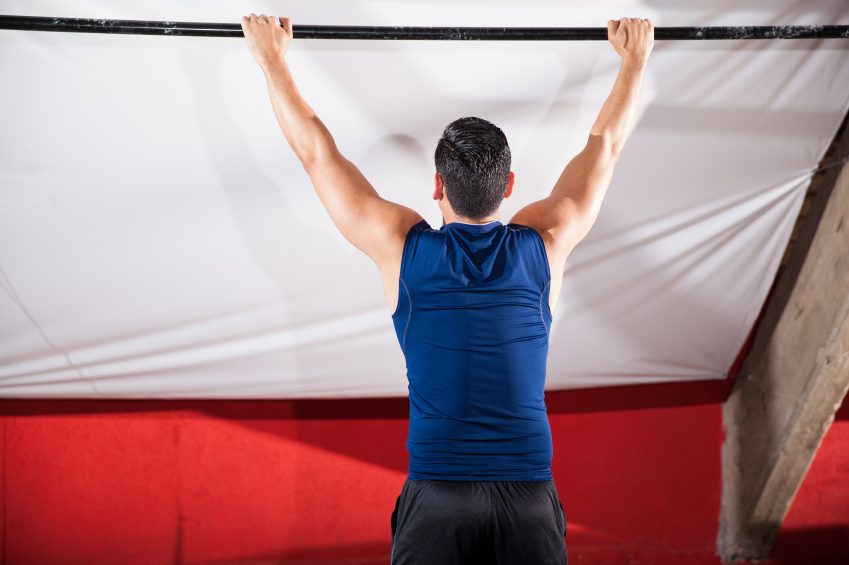 Archer pull-ups will have you well on your way to one arm pull-ups. | iStock.com

Consider this exercise the next step toward being able to perform pull-ups using only one hand. Even if you can crank out tons of regular pull-ups, doing them with a single arm is going to be insanely difficult. Archer pull-ups can help you on your way since they use both arms but allow you to focus most of your effort on each separately.