You Can Build Major Muscle With These Push-Up Variations

If basic push-ups are getting old, it’s time to try something new. | iStock.com

It turns out your gym teacher may have been on to something by making you do all of those push-ups. The classic exercise is known for strengthening arms, but it’s also an ideal move to target your core and lower back. If it sounds too good to be true, keep in mind that form matters.

So, all those push-ups you do from your knees? They may be doing something for you, but you’re selling yourself short.

AZCentral.com reveals you’ll only score these benefits if you keep yourself properly aligned. If you feel like you’ve mastered the basics, it’s time to incorporate some new challenges into your routine. Those challenges can come in any number of ways. You can increase your reps, for example. Or add some weight or resistance in the form of dumbbells or bands. But if you want to really shake things up, you can try doing push-ups in a completely new way.

There are dozens upon dozens of ways to do push-ups. These can be fun and entertaining to try out, but if you’re serious about building muscle, you may want to contract the scope a bit. Some push-up variations will target different muscle groups in your upper body, perhaps putting an emphasis on your arms or shoulders as opposed to your chest. Figure out what you’d like to target, and spice things up a bit.

Here are 10 push-up variations to try when you feel yourself hitting a plateau, or simply getting a little bored in the gym.

Spiderman push-ups are quite a challenge. | iStock.com

If it’s chest and arm strength you’re after, then this move should be at the top of your list. StronGains explains those muscles are forced to work harder because this exercise incorporates leg movements that shift your weight to different areas. The article went on to say this move is particularly good for deltoids, pectorals, and triceps, but it’s also a great way to engage your core. Men’s Fitness says this variation is like doing a crunch and a push-up at the same time.

Start in the standard push-up position, with your hands planted firmly in front of your shoulders. As you lower yourself to the floor, lift your right foot off the ground and swing your knee to meet your right elbow. As you raise back to the top of the move, swing your leg back to the starting position, and plant your foot. Repeat on the other side. Men’s Health shows how to do this move properly. Remember, maintaining form is more important than the number of reps. Start small, and increase as you get stronger.

Many people focus their efforts on building bigger biceps, so it’s a good idea to give the backsides of your arms a little bit of attention. Verywell explains working on this muscle group is critical for avoiding imbalances that could lead to injuries. Just don’t overdo it, because the muscle group is small and can’t handle as much weight as other parts of your arm.

To perform a diamond push-up, place your hands on the floor in front of your chest with your fingers and thumbs pressed together to form a diamond shape. Your legs should be extended straight behind you, as with any push-up. Lower your chest to the floor, then press yourself back into the starting position. Bodybuilding.com illustrates the move and offers some suggestions for variations. Though this exercise is effective, it’s also incredibly challenging.

BuiltLean also points out that the move can be hard on wrists, shoulders, and elbows, so you might want to avoid this one if you have any nagging injuries on those parts of your body. 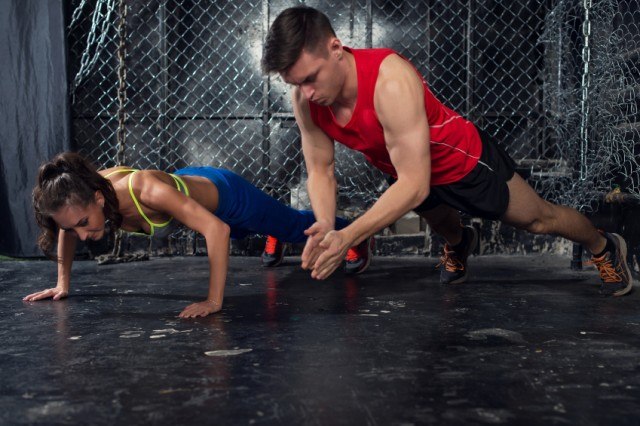 Clap push-ups are not for those who have yet to master basic ones. | iStock.com

Before you roll your eyes at those guys who give a little hop and clap between each push-up, consider the benefits of this variation. Men’s Fitness says this exercise helps to build explosive power while developing your pectorals. Working these muscles will help carve a chiseled chest and can help stabilize your shoulders, which reduces the risk of injury.

The move is fairly straight forward. Begin in the plank position with your arms extended and hands planted on the floor in front of you. Lower yourself toward the ground, then push yourself up quickly, clap your hands, and land back in the plank position. Bodybuilding.com explains beginners should plan to start with their feet a bit wider apart. As you improve, you can move your feet closer together.

This variation may help even out imbalances. | iStock.com/undrey

While the name isn’t exactly catchy, this push-up variation is one you’ll want to start working into your routine. This move helps to target your serratus anterior, a muscle that’s critical for maintaining proper posture. Livestrong.com reveals a weakness in this region can cause your shoulder blades to stick out and limit shoulder movement.

Begin in the plank position, with your hands planted directly in front of your shoulders. Move your left hand several inches ahead of your right hand, and lift your right leg off the ground. Keeping your core tight and your raised leg steady, lower your chest to the floor. Push yourself back to the starting position to complete one repetition. Livestrong.com recommends starting with five to 10 before switching sides.

Push-up jacks are as hard as they sound. | iStock.com

Time-crunched folks often have difficulty figuring out if they’re better off going with cardio or strength training, yet you really need to incorporate both into your routine. Instead of choosing one or the other, look to moves like this intense push-up alternative that combines the two. Start in the same plank position as you would for a regular push-up. As you lower your chest to the floor, jump your legs as wide as you can out to the sides. As you raise yourself back to the starting position, jump your legs back together. Check out Verywell for a diagram that illustrates the proper technique.

If you’ve never combined strength training and cardio, this move is a great way to start. According to Livestrong, you’ll increase your aerobic capacity while building muscle in a condensed time frame, so you’re a lot less likely to get bored. The article also recommends keeping rest between exercises short in order to keep your heart rate elevated.

When standard push-ups start to get too easy, raising your feet higher will provide more of a challenge. Life by Daily Burn notes performing this move is very similar to an incline bench press, so it’s a good choice for days when you can’t make it to the gym. To perform this exercise, you’ll need some sort of object that will raise your feet about 12 inches off the ground. From there, lower yourself into the regular push-up starting position. Keeping your forearms vertical, lower your chest to the ground, then return to the starting position.

While you can increase your effort even more by raising your feet higher, you should be mindful of what muscle group you are looking to target. AZCentral.com explains bringing your feet past your hips turns the move from a chest exercise to a shoulder exercise. That can be a great thing, but people prone to shoulder injuries might want to be careful.

Get ready for a serious workout with this push-up variation. | iStock.com

You don’t need to push yourself to a meltdown to get through a set of atomic push-ups, but it might happen regardless. Atomic push-ups add another layer of complexity to the mix by having you hang your feet from a couple of straps, and performing the push-up. It’s really not all that complicated — the only twist that’s been thrown into the mix is that your feet are in the straps, putting more weight on your upper-body.

Developed as a part of the TRX training regimen (the straps), this particular variation will increase strain on your upper-body, and force you to put more effort into pushing yourself away from the ground. You’ll feel it the most in your shoulders and pecs, and even in your legs, because you’ll be forced to keep them straight while performing the push-up. 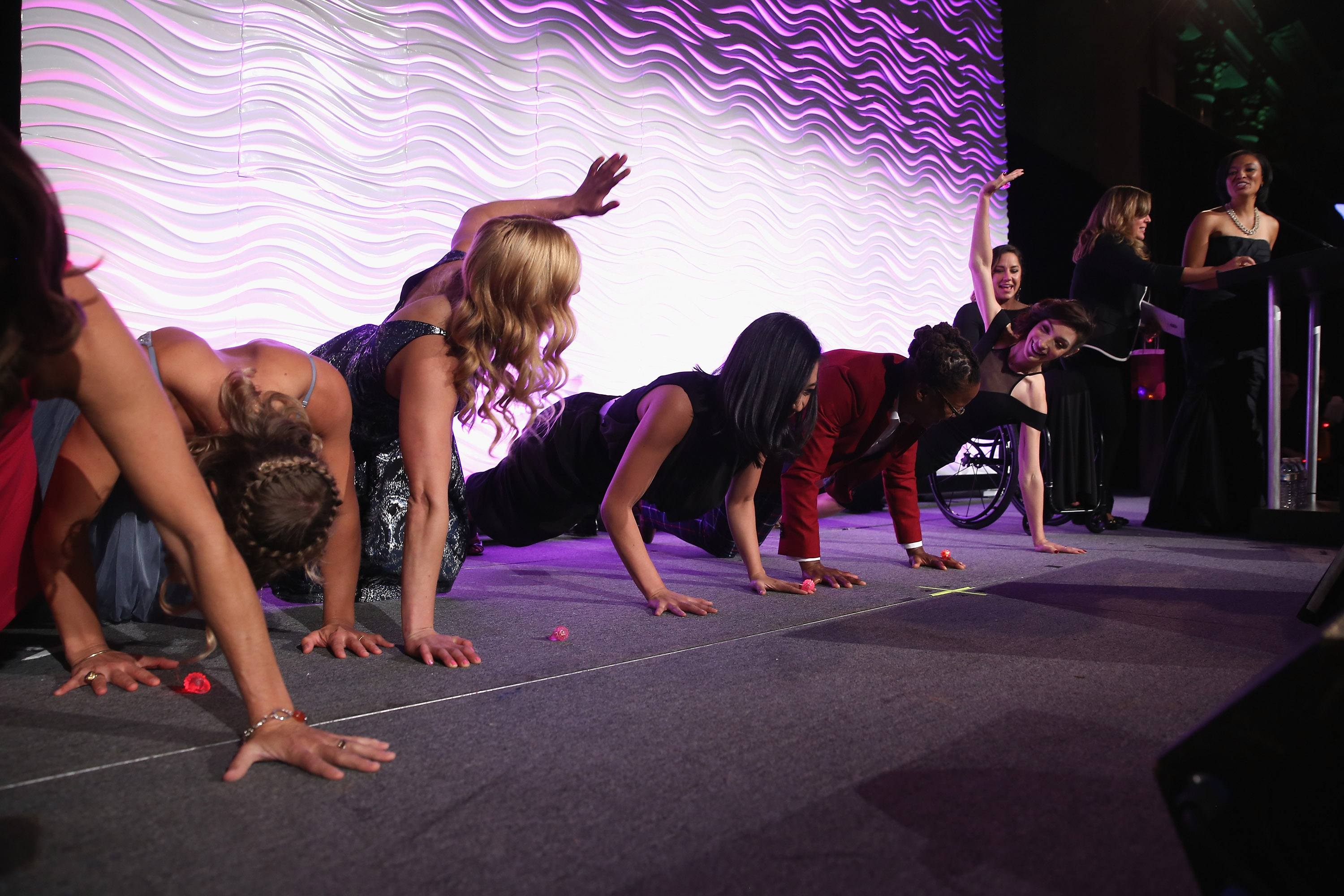 These athletes show how to perform push-ups. | Jemal Countess/Getty Images

If you really want to throw a challenge into the mix, try doing push-ups while keeping one arm raised straight out in front of you. You’ve probably tried a one-handed push-up before, but you’ll typically put the unused hand behind your back. Try holding it straight out in front of you as you go up and down. It’ll cause you to redistribute your weight and balance, while also doing a one-handed push-up — a challenge all on its own.

Before trying this, work on getting the one-handed push-up down. This tutorial from Breaking Muscle is a great place to start. Once you’re comfortable with your abilities as far as that goes, try it with the raised arm.

Even tiny changes can make a huge difference. | iStock.com

The pseudo planche is often regarded as the most challenging push-up variation you can do. It requires that you reposition your hands and straighten your arms (as seen above), while some people turn their hands around 180 degrees so that your fingers point toward your feet. It may not look like much, but after you give it a shot, you’ll see what makes it so hard — you’re engaging muscles you don’t often use, and adding balance into the mix. 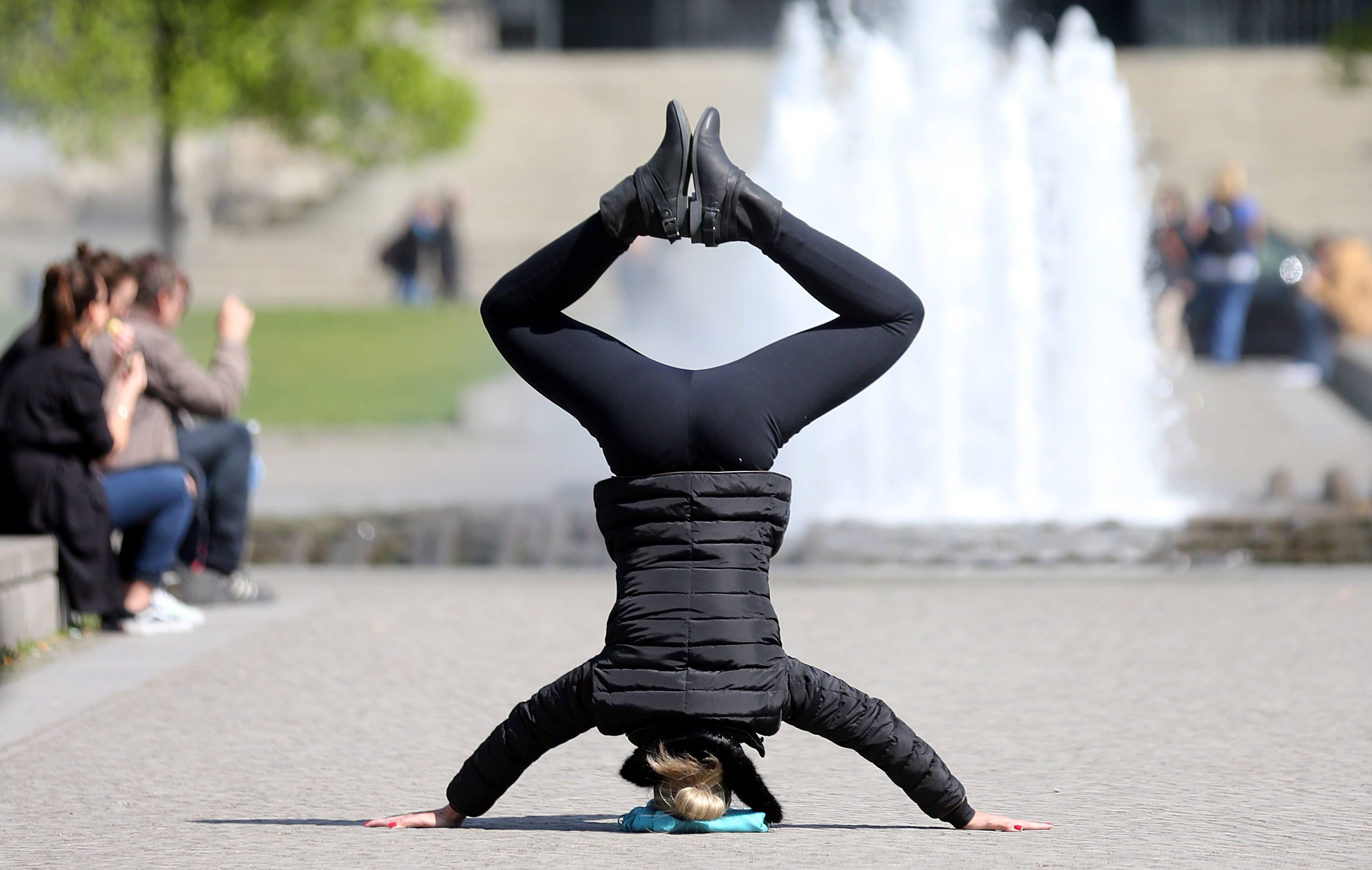 If you really want to get crazy, you can try the pike push-up. This exercise is really meant to target your shoulders rather than your chest and requires that you get into a near-headstand position. You can really think of it as doing a push-up in the headstand position, though it can be performed with your lower body folded toward the floor. The goal is to build strength so that you can eventually do a headstand push-up and be the envy of all your friends.

A good way to start training is to get your body into a 90-degree angle and perform push-ups from that position. Men’s Health has a great example that’s worth checking out, which also makes this exercise a lot less intimidating. From there, you can up the difficulty.