Samantha Bee Insulted 1 of Donald Trump’s Kids and His Reaction Was Totally Predictable (Plus, the Photo That Started It All)

First, Roseanne Barr posted a racist tweet, lost her show, and blamed a drug for her comments. Then, Samantha Bee insulted a Trump — but she got to keep “Full Frontal.” Unlike Barr, she didn’t have an excuse, and admitted it. Still, President Trump couldn’t help but chime in with a response so predictable it’s almost comical.

Find out the commentary that could cost the comedian her job — plus, the photo that prompted Bee to lash out at one of the younger Trumps (page 6) and the unexpected reason Donald Trump didn’t like it (page 7).

Samantha Bee’s ‘Full Frontal’ is a platform for her opinions 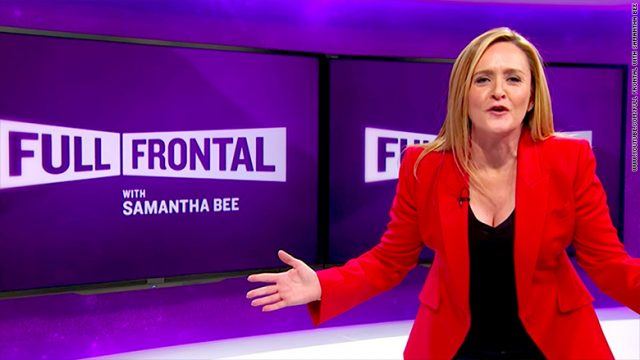 The political commentary show gives the comedian an opportunity to express her opinions about what’s happening across the political spectrum. She took things a little too far when she had to issue an apology following a particularly heated rant.

Next: One segment on the show rubbed Bee the wrong way.

The topic of undocumented immigrants fueled the fire

Samantha Bee brought something up on her show. | Amanda Edwards/Getty Images

May 2018’s immigration controversy brought to light a related but separate issue: Children of undocumented immigrants being separated from their families. Bee addressed the issue in a segment on her show — which is when she first addressed Ivanka Trump.

Next: Things started out (mostly) mild.

During the show, Bee called the younger Trump “oblivious” before addressing a photo she’d posted online (page 6). She said: “Tearing children away from their parents is so evil, it’s the inciting incident in almost every movie we’ve ever cared about.”

Next: She wasn’t done insulting her yet.

What did Samantha Bee say about Ivanka?

As the BBC put it: “She then called Ms Trump a ‘feckless [expletive]’, employing an offensive term for part of the female anatomy.” It turns out that expletive could cost Bee her job — that is, if Donald Trump has his way.

Next: Could she really lose her show?

Trump thinks Bee should be fired

Donald Trump has something to say. | Frederic J. Brown/AFP/Getty Images

This comes as no surprise to those who first knew Trump not as the president of the United States, but instead as the reality star on “The Apprentice” whose catchphrase of sorts became: “You’re fired.” Unfortunately, his tweet (page 7) might not be enough to make this firing a reality.

Next: Here’s the Instagram photo that caused the outburst.

The photo features Ivanka snuggling her young son, which left Bee feeling infuriated. She did her best to provide a “call to action,” saying, “Put on something tight and low-cut and tell your father to [expletive] stop it.”

Next: Trump compared Bee’s comment to this celebrity’s mistake.

Why did Trump call it a ‘double standard’?

Trump tweeted out a message about Samantha Bee. | Donald Trump via Twitter

The president tweeted: “Why aren’t they firing no talent Samantha Bee for the horrible language used on her low ratings show?” ABC canceled “Roseanne” just hours after its star posted a racist tweet about a former aide to President Barack Obama.