On the surface, it appears that Tiffany Trump’s boyfriend, Ross Mechanic, is the polar opposite of her POTUS father. He’s Jewish, a registered Democrat, and recently got a degree in computer science. But Mechanic is more like Donald Trump than first meets the eye. In fact, some of the similarities between Tiffany’s father and her main squeeze are downright uncanny.

Both men share political beliefs (at least at one point) 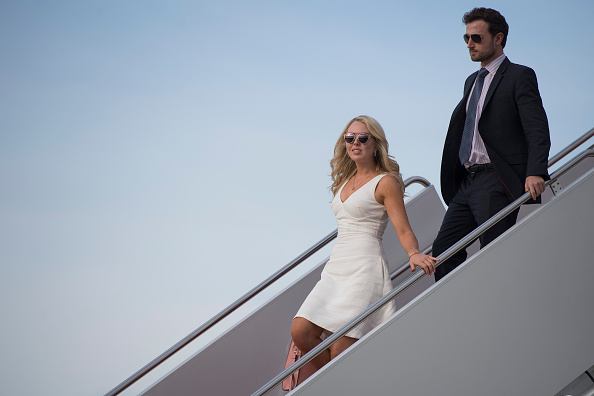 Donald Trump’s and Ross Mechanic’s politics actually aren’t all that different. Mostly because, although he is labeled a Republican now, Trump has changed his political affiliation multiple times over he years. (He was even a registered Independent at one point.)

In 2004, Trump registered as a Democrat, and reportedly gave the Democrats more money between 1989 and 2009 than Republicans. Despite all that money and support, he switched to the Republican Party in 2009, back to being an Independent in 2012, then back to Republican just a few months after that.

They both come from real estate backgrounds

Real estate is in their blood. | ERIC BARADAT/AFP/Getty Images

This is where things get very interesting. Trump’s father, Fred Trump, was a real estate broker and developer, and Ross Mechanic’s father, Jonathan Mechanic, is a real estate attorney. Jon Mechanic and Donald Trump also knew each other back in the day. More recently, Ross had an internship at a real estate start-up co-founded by — drumroll, please — Trump’s son-in-law, Jared Kushner. The connections between the two families just don’t stop.

Both are also from New York

They both come from the same land. | Mario Tama/Getty Images

That’s right — both men even hail from the same state. (Although Mechanic probably didn’t grow up in the same Queens neighborhood that Trump grew up in.) Trump’s parents sent him to New York Military Academy when he was 13, while Mechanic attended Friends Seminary in Manhattan before college. Which brings us to …

Tiffany Trump attended the University of Pennsylvania, where her father also went to school. This also where Tiffany met Mechanic, another student there. Mechanic did not, however, attend the Wharton School of Finance, where the POTUS claims he was at the top of his class. Tiffany’s main squeeze majored in computer science, and graduated in 2017.

Would you put your money on the Donald or Mechanic? | iStock.com

It’s common knowledge that when Trump isn’t at one of his many golf courses that he is partaking in a game of tennis. Mechanic is an avid fan of the game himself, although it appears to be from more of a spectator standpoint. Pictures were posted to social media from Mechanic’s court-side seats at the U.S. Open.

Setting out on a private jet whenever you want must be nice. | iStock/Getty Images

While most of Donald Trump’s trips these days are for work, he still seems to make time to vacation at one of his golf resorts. Not coincidentally, Mechanic is also found of taking trips, like the European excursion he and Tiffany took over the summer. Both men’s personal trips have also cost taxpayers plenty of money. (Although, to be fair to Mechanic, his expensive lifestyle wouldn’t impact U.S. taxpayers if he wasn’t dating the First Daughter.) Tiffany’s car rentals in Italy alone totalled $117,489.44, while the POTUS’s Mar-a-Lago trips cost upwards of $20 million in the his first 100 days in office.

Both Trump and Mechanic have bad taste in clothing

We’ll never understand why he wears his tie so long. | Mark Wilson/Getty Images

Look at a couple pictures of Ross Mechanic, and it’s clear that Tiffany chose a guy that dresses an awful lot like her father. At least Mechanic doesn’t also wear his ties ridiculously long.