When the news broke that a California couple, David and Louise Turpin, had been accused of torturing their own children, it seemed hard to believe. However, as the story unfolded, we learned that this family was a far cry from the picture they painted of themselves. Family vacations, vow renewals, and more left few people suspecting anything could be wrong in the seemingly normal household. Here is the truth behind this couple, their family life, and what they allegedly did to their children.

They ended up celebrating their marriage several times after they eloped. | Estamos Unidos via Facebook

Louise Turpin left with David Turpin when she was only 16 years old. He was 24. Her family claimed that he promised to give her a life of luxury. However, her father did not approve of the relationship. Her mother allowed them to secretly date because she felt David Turpin had a strong Christian faith and seemed like a good fit. David Turpin told his wife that if she married him, he would give her everything she ever wanted. Louise was only a sophomore in high school when the two eloped.

Next: The couple seemed like an ordinary family on the outside.

Their children were always part of their events. | Estamos Unidos via Facebook

The Turpins were big fans of renewing their wedding vows. In 2013 and 2015, the couple went to a Las Vegas chapel to say “I do” one more time — and they brought their children with them. The kids got dressed up for the occasion; the girls wore pink dresses and the boys wore dark suits. “They were quiet, yet nice and well behaved,” Kent Ripley, who sang to the couple as they danced at their vow renewal, told NBC.

Louise Turpin’s family was under the impression that she lived a wealthy, happy life. She would hear about the family going to Vegas, plus other outings like frequent trips to Disneyland in California. “We always thought she was living the perfect life,” her sister said in an interview.

Next: Their lavish life was not all it appeared to be.

… but their finances were not what they seemed 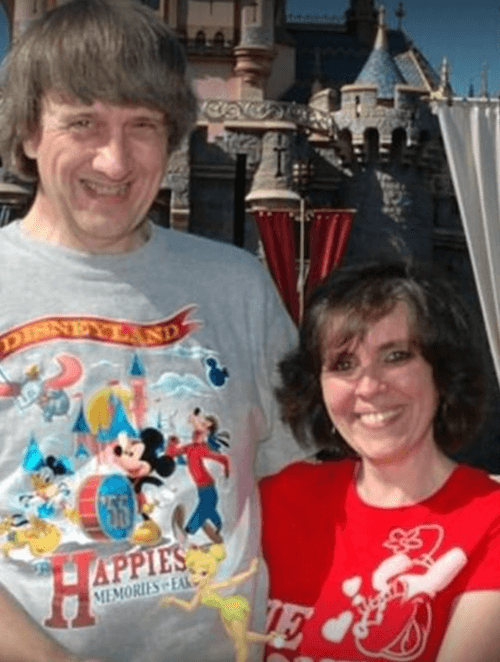 They went on extravagant vacations while deep in debt. | Estamos Unidos via Facebook

In reality, the couple faced financial hardships. David Turpin filed for bankruptcy in 2011, even before the whole family traveled to Las Vegas. Bank statements showed he owed more than $140,000. BBC reported that the family’s expenses exceeded their income by more than $1,000 per month. The couple’s Texas home was foreclosed that same year. By the time the couple left Texas, they had credit card debt and owed medical expenses to the state.

Next: They hid the truth from their closest relatives.

They cut ties with family members

Elizabeth Flores never got to see her nieces and nephews. | ABC News via YouTube

Elizabeth Flores, an aunt of the children, said Louise Turpin never let her see her nieces and nephews even though she begged. Louise Turpin did not let either of her sisters see her children, but Flores said the couple had been like that long before they had kids. Flores also said that Louise Turpin’s father booked a flight to California to surprise her. When he called to tell her he was coming, she turned him away. She also did not attend his funeral.

Teresa Robinette, another sister of Louise Turpin, said that she had seen photos of her sister’s children and commented on how thin they looked. Louise Turpin told her sister that they were lanky like their father and laughed off the comments.

Next: Some of their children were adults, but you’d never know it.

Their children were extremely malnourished

They were finally charged for their crimes. | ABC News via YouTube

In January 2018, a 17-year-old daughter of the couple escaped from her home and ran. She had been planning this for more than two years. She alerted authorities, who then went to the house and discovered 12 other malnourished children who had clearly been starved. They were much older than their appearances suggested — some of them were not children at all. They ranged from ages two to 29 yet had the bodies of teenagers. The 29-year-old weighed just 82 pounds. Their lack of nutrients left them with cognitive complications and fragile physiques. David and Louise Turpin were arrested and charged with multiple counts of torture and abuse.

Next: The abuse only got worse as the years went on.

The couple allegedly shackled the kids to their beds

Their home was found in a disastrous state. | ABC News via YouTube

The abuse did not stop at starvation. Several children were found shackled to their beds when authorities arrived. They were not allowed to use the bathroom and could only bathe once per year.

Before the couple moved to California, they tied their children up with ropes in their Texas home. According to the Chicago Tribune, one child wriggled free, which led the couple to use chains instead. The Turpins would torture their children by putting fresh pies on the kitchen counter but not letting the kids eat any. They also put unopened toys around the house but would not let the children play.

Next: The children never gained any independence.

The Turpins never let their children out of their sight

Their children were never allowed to socialize with others. | ABC News via YouTube

The couple home schooled their children. They did not let them socialize with friends or neighbors. The only outside experiences the children had were a trip to Disneyland and vow renewals in Las Vegas. Also, the kids stayed up late at night and went to bed just before dawn. This prevented them from making friends or talking to any of their neighbors. The New York Times reported that one woman claimed she saw one of the sons rummaging for food in the trash cans outside.

Next: It won’t be easy for the kids to recover.

The children have a long road to recovery

They have the public’s support. | ABC News via YouTube

Experts described the scene as horrific. The children are now being psychologically evaluated to determine their best treatment options. CNN reported that the Turpin’s children have been separated — the adults are at one facility and the children are at another. A full assessment needs to be done to know exactly where to start with them. Plus, the children will need to find good homes. “It’s hard to think of them as adults,” Mark Uffer, Corona Regional Medical Center CEO, told CNN. As of now, the children are stable and being fed well to try and get their bodies where they should be.