Even with professional etiquette training and virtually unlimited resources, members of the royal family still manage to embarrass themselves from time to time. (Prince Harry could win an award for his past antics. But we’ll get to that in a second.) Let’s take a quick look at the most shocking royal moments, including a humiliating moment for Kate Middleton (No. 10) and the queen’s Nazi connection (No. 13).

Being a royal means dressing with a certain level of modesty and decorum. For the ladies in the family, that means wearing pantyhose and long dresses. Heck, Queen Elizabeth reportedly puts curtain weights in her dress hems to keep them from flying up! This is a tip Kate Middleton could have used while abroad shortly after her marriage to Prince William. Her dress flew up so many times, many publications lost count.

Next: This royal outcast has plenty of embarrassing royal scandals.

There’s a reason not too many people are fond of Sarah Ferguson. | Jonathan Leibson/Stringer

Sarah Ferguson did plenty to embarrass herself while she was married to Prince Andrew. One of the former Duchess of York’s most notorious scandals occurred when photos emerged of one of her non-royal lovers sucking on her toes. To make matters worse, Fergie was with Queen Elizabeth at Balmoral Castle in Scotland when the photos were printed in the paper. She was never invited back to Balmoral again.

Next: Fergie isn’t the only one with embarrassing photos in her repertoire.

3. Princess Margaret and ‘The Bank Job’

Princess Margaret has had her fair share of scandal. | STF/AFP/Getty Images

Queen Elizabeth’s younger sister, Princess Margaret, had her fair share of love and scandal in her heyday. She also had a pension for having her picture taken while wearing little to no clothing. But the princess was set up for royal embarrassment when robbers busted into a Lloyd’s of London bank to steal copies of naked pictures of her with a man that was not her husband. The family can’t live the story down, either — it became the partial plot for a Jason Statham movie in 2008.

Next: An awkward phone call to the People’s Princess.

James Gilbey had a special nickname for Princess Diana. | YouTube

Princess Diana was connected to a handful of “other men” during her loveless marriage to Prince Charles. But Di’s dirty laundry really got aired out when a phone call between her friend and alleged lover, James Gilbey. Throughout the phone call, Gilbey affectionately calls the Princess of Wales by the pet name “Squidgy” — to which the tabloids had a field day. Buckingham Palace, on the other hand, was less than thrilled with the annoying call and the attention it drew.

Next: The prince of partying makes his first appearance on our list.

Before he was running charities with Michelle Obama, Prince Harry was the party boy that couldn’t be stopped. His antics — which he later attributed to grieving over his dead mother — made him the embarrassment of the royal firm on more than one occasion. One memorable scene took place in 2012 when pictures leaked of Harry letting loose while partying in Las Vegas. So loose even, that he was pictured stripped down to his “crown jewels.” His grandmother was surely less than impressed.

Next: Speaking of the queen …

No, not even Her Majesty can escape the occasional run-in embarrassment. The composed monarch has been caught by cameras making funny faces every now and then. But she was really hit with humiliation when a photo surfaced of her apparently picking her nose at the Royal Windsor Horse Show in 2014.

Next: Princess Diana wasn’t the only one with an embarrassing phone call that leaked.

Prince Charles has a very freaky side. | Carl Court/Getty Images

Princess Diana wasn’t the only one who was unfaithful during her marriage to Prince Charles. In fact, the Prince of Wales’ long-standing affair with Camilla Parker-Bowles was at the forefront of his and Diana’s marital woes. Charles became the embarrassment of the family when a bedtime call between him and Camilla surfaced in which he told his mistress that he wanted to be reincarnated as her tampon. The rest of the royal family was disgusted — except for his new ex-wife, Diana. She was reportedly very amused by Charles’ humiliation.

Next: Prince Philip gets caught with a dirty mouth.

Prince Philip has a bit of a potty mouth. | Yui Mok/AFP/Getty Images

While his wife maintains her composure, for the most part, Prince Philip has a long-standing history of colorful language and offensive gaffes under his belt. (His recent comments about a man’s beard are just most recent offense.) His big mouth got him into hot water when he was caught on tape getting very impatient waiting for a picture to be taken. While growing visibly irritable during a photo shoot at the Royal Air Force Club, Philip erupted: “Just take the f–ing picture!” really, you’d think that at 96 year’s old he would be used to standing for photo ops by now.

Next: One of Prince Harry’s most shocking moments to date. 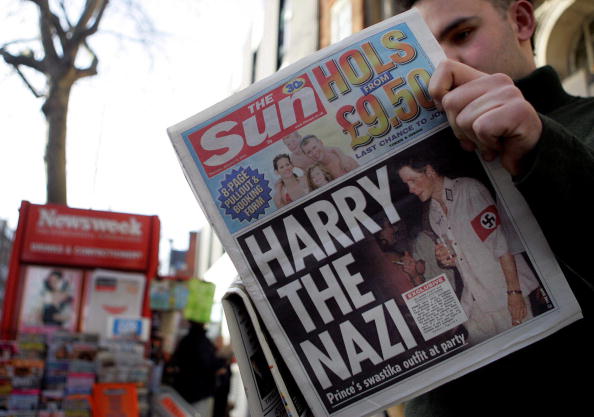 As previously mentioned, Prince Harry went through a phase where he literally couldn’t go a month without causing the royal family some kind of humiliation. But he really got himself into trouble in 2005 when photos emerged of him attending a friend’s dinner party dressed as a Nazi — red armband and all. To make the matter worse, the photos leaked mere weeks before the queen was supposed to lead a Holocaust memorial ceremony. Needless to say, the entire royal family was having to apologize for Harry’s behavior after that one.

Next: From a poor choice in clothing, to no clothing at all.

When they first started dating in college, Prince William and Kate Middleton were able to court with some privacy. Needless to say, the Duke and Duchess of Cambridge don’t enjoy that luxury so much anymore. This became very apparent in 2012 when the French tabloids snapped pictures of her sunbathing topless. While the incident was humiliating for the newly-wed royals, the paparazzi responsible are now facing the consequences.

Next: And then, there’s Kate’s husband and his boys-only ski trip …

The Duke of Cambridge is pretty good at keeping his shenanigans under wraps. But, like the rest of the royal family, even he can’t always escape the prying paparazzi. So naturally, he got royally busted when he got a little too close to some females while partying at boy’s ski weekend in early 2017. His wife, Kate, was not amused in the slightest by his embarrassing behavior.

Next: Um, that’s not what you do with a bottle of vodka.

Prince Harry used to have a little too much fun. | David Rogers/Getty Images

Prince Harry’s drinking problem was an issue for much of his teens and 20s. His battle with the bottle reached an all-time high in 2007 when it was revealed that the red-headed royal wasn’t just drinking vodka, but snorting it as well. This dangerous behavior gained international attention, and prompted rumors that Prince Harry’s drinking was part of an even bigger problem. Years later, he finally sought help for his destructive behavior.

Next: One of the most talked-about and dissected photos of a royal.

13. The queen’s own Nazi connection

There is a video of a young Queen Elizabeth giving the Nazi salute. | Chris Jackson/WPA Pool/Getty Images

The monarchy has long been trying to remove itself from any connection to Nazi Germany and Adolf Hitler. (Prince Edward and his wife, Wallis Simpson, were allegedly very strong Nazi sympathizers.) So it came as a great disappointment when the film was published in 2015 of Queen Elizabeth, aged seven at the time, performing the Nazi salute. Buckingham Palace released a statement that it was upsetting that a “film shot eight decades ago… has been obtained and exploited.”

Next: Photographs aren’t the only things that can humiliate the royals.

James Hewitt tried to capitalize off of he and Diana’s love letters. | Steve Finn/Getty Images

The pain of Princess Diana’s passing hurt both the royal family and fans around the world. But that didn’t stop one of her former lovers from trying to cash in on her name. The family suffered humiliation years after her death when James Hewitt, one of Diana’s beaus, tried to sell their private love letters to the highest bidder. Hewitt reportedly went around to auction houses trying to sell them off. Hewitt has since given an interview denying that he tried to do such a  thing.

Next: All that glitters isn’t always gold. 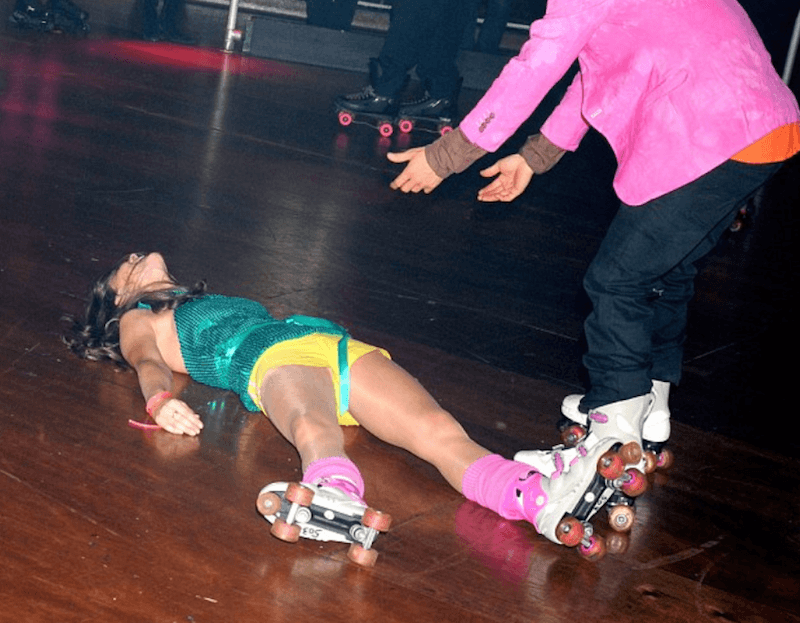 Before she became Duchess Catherine, Kate Middleton caused some commotion at the roller disco charity event she helped organize back in 2008. The night lives on in infamy for two reasons. The first, that it marks one of the many nights that has caused a rift between Kate and her cousin-in-law, Princess Beatrice. But most importantly, it’s known for an embarrassing picture of Kate tumbling off her skates and lying flat on her back. (Complete with a camera shot trying to go up her itty-bitty neon yellow disco shorts.)