10 Small Symptoms That Could Signal a Huge Health Problem

Writing off a runny nose as a common cold is one thing (after all, you don’t want to sound like a baby). But there are other symptoms, seemingly just as minuscule, that do actually warrant a visit to the doctor. Symptoms where turning a blind eye will do you far more harm than good. In the interest of your well-being, we recommend taking note of these small yet significant red flags that could have grave consequences. Here are 10 not-so-obvious signs that just may signal a huge health problem.

1. Tingling in your hands and feet

Tingling in your hands is not normal. | iStock.com/OlgaMiltsova

Having your legs fall asleep after you’ve been sitting cross-legged is normal: It’s simply the result of prolonged pressure placed on a nerve. Because this pins-and-needles feeling goes away shortly after you change positions, there’s no cause for concern. However, if you have nonstop tingling in your hands, it may be a sign of carpal tunnel syndrome.

Neurologist Clifford Segil tells Women’s Health continual tingling in your thumb, index finger, or middle finger warrants a trip to the doctor. Left untreated, carpal tunnel syndrome could result in long-term nerve damage. Additionally, weakness in the hand — particularly in the ring and pinkie fingers — that doesn’t go away after you’ve straightened out your arm could signal a problem in the ulnar nerve, located in the elbow. According to Women’s Health, this ongoing sensation could be a sign of ulnar nerve palsy, a condition that causes muscle exhaustion and possibly a claw-like formation of the hand.

Yellow nails that are thick and excessively curved indicate yellow nail syndrome. A person who has the condition may also notice a loss of cuticles, and may even start to lose nails. More importantly, though, yellow nail syndrome may signal bigger problems than just aesthetic issues. According to the National Organization for Rare Disorders, yellow nail syndrome is also characterized by “abnormalities affecting the lungs and the airways (respiratory tract), and swelling or puffiness in different parts of the body.” The exact cause is unknown, and it’s usually seen more often among older adults. But regardless of age, this is something you need to have checked out right away.

Has your handwriting changed? | iStock.com

Handwriting is bound  to change somewhat over time. Just think about how perfect your cursive was when you were a teenager, before you became an adult and had to sign for something almost daily. And it’s not uncommon for your signature to become less legible over time. But when your handwriting changes suddenly, it may be cause for concern. In particular, you should consult a doctor if the size of your letters has gotten smaller and the words are crowded together. Unfortunately, this is a common sign of Parkinson’s disease.

Those with dementia often begin to struggle with money management. | iStock.com

Alzheimer’s disease is typically associated with forgetfulness, confusion, and losing things. Another early sign of the brain disease is a change in judgment or decision-making, The Alzheimer’s Association says. Not to be confused with making a bad decision once in a while (which can be normal), continual bad judgment may occur in matters of personal hygiene or finances. For example, agreeing to spend way too much on something you shouldn’t. Because Alzheimer’s is often more recognizable to loved ones than the person who has it, this is an important sign to look out for, especially in an elderly family member.

That unsightly spot could be a huge problem. | iStock.com/SIphotography

Though rare, melanoma can sometimes grow underneath the nail. A dark-colored streak appearing on the nail shouldn’t be ignored, the American Academy of Dermatology says, as it may actually be a sign of the deadliest form of skin cancer. Just as you would with a new spot or raised mole, it’s important to keep a close eye on changes that occur. See a dermatologist immediately if you notice a dark-colored streak and the discoloration doesn’t improve or the size of the streak increases.

6. The need to frequently clear your throat

Constantly clearing your throat? It could be acid reflux. | iStock.com

Acid reflux might not sound all that bad, as lots of people deal with heartburn, but some types are more severe than others. Gastroesophageal reflux disease, or GERD, occurs when acid and partially digested food make their way into the esophagus. While GERD affects about 20% of Americans, according to U.S. News & World Report, there’s another kind of reflux you may not be familiar with: Laryngopharyngeal reflux, which is the backflow of stomach contents in the airway. One sign of this type of reflux is the constant need to clear your throat. Although it seems like a minor annoyance, untreated reflux increases the risk of esophageal cancer.

For most women, bloating probably wouldn’t set off any major alarms. When it occurs just in the abdomen, though, it may be a sign of ovarian cancer. Amanda Fader, M.D., told Reader’s Digest, “With ovarian cancer, not only can tumors grow quite large, but they can result in fluid growing around them, which can cause pretty dramatic abdominal extension.” If you’ve noticed more frequent and pronounced bloating lately (an you’re female), it’s time to make an appointment with your gynecologist. 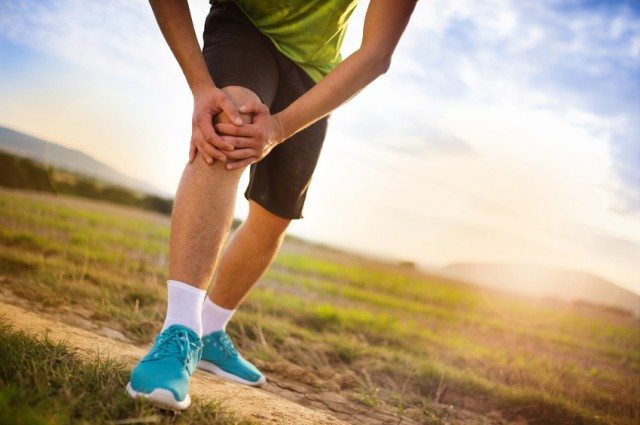 This is beyond normal bruising. | iStock.com

Random bruising here and there probably doesn’t raise much concern. Maybe you’ve just been extra active lately and your body’s been put through the ringer. Or, maybe you’re just one of those folks who bruises easily. Before you totally dismiss it, though, know it might be something much more serious. The Cancer Treatment Centers of America says bruising or bleeding is a common sign of leukemia. A sudden increase in noticeable bruising, without proper reasoning, definitely warrants a visit to the doctor.

If you always have to go, it might be time to see the doctor. | iStock.com

An increased need to urinate could be an early sign of diabetes, according to Reader’s Digest. This is because, in people with diabetes, the body doesn’t break down sugar as well as it should. Too much sugar remains in the bloodstream, so your body needs to flush it out. Hence all the trips to the bathroom. Unfortunately, diabetes can easily sneak up on you, which is bad news for anyone who’s more likely to ignore its subtle signs. The longer it’s left untreated, the greater your risk for heart disease, kidney disease, and blindness.

This goes way beyond your usual drowsiness after a night without enough sleep. | iStock.com

Feeling sluggish can be the result of any number of things: a busy workweek, not getting enough sleep, poor diet, etc. Or, if none of these things account for your constant lack of energy, it could be something more serious — hypothyroidism, Self suggests. Because the thyroid is responsible for your metabolism, heart rate, and more, it’s imperative it functions properly by producing the right amount of hormones. When it doesn’t, as is the case with hypothyroidism, you could experience decline in mental function and poor circulation, which increases your risk for heart disease.

Although these signs may not sound too serious, they could signal a major health problem, so it’s important to discuss any of them with your doctor.