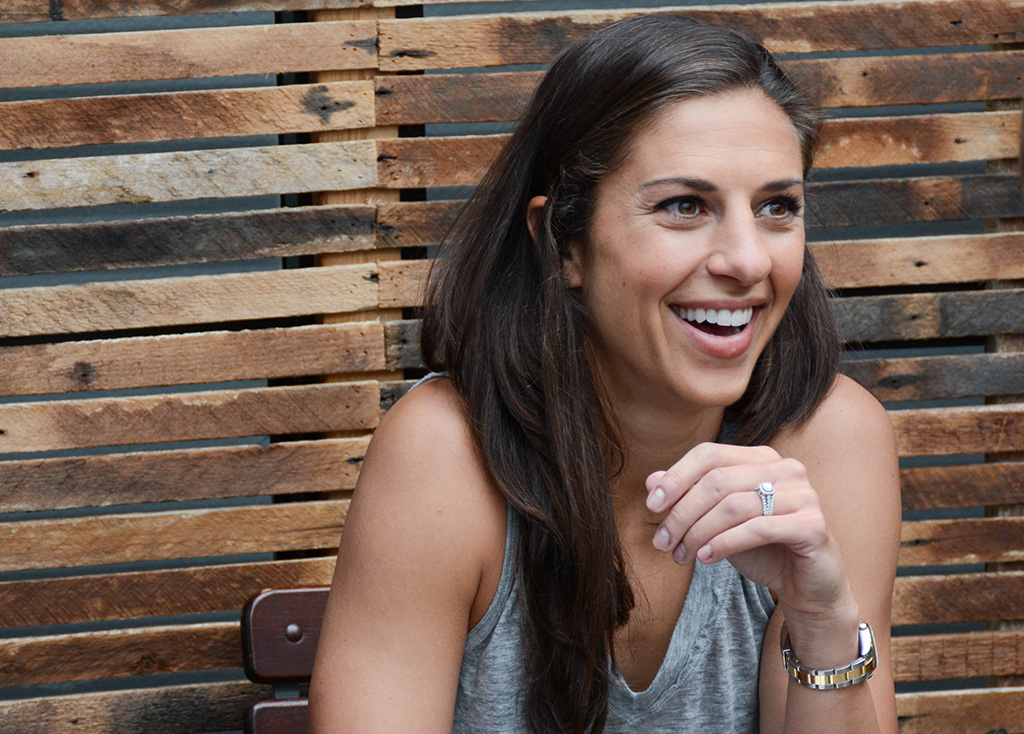 Fair or not, most of us remember certain people based on one memorable thing they did or experienced. For some unfortunate folks, it’s that time they wore a bizarre outfit to work. For U.S. soccer phenom Carli Lloyd, it’s a lights-out performance that included scoring three goals in the first 16 minutes of the 2015 FIFA Women’s World Cup Final. It’s not a bad way to be remembered, but for Lloyd, it’s just a memory at this point. She’s ready for what’s next.

Despite a minor setback in the form of a knee injury back in April, Lloyd’s feeling better than ever about this year’s Olympic Games. We recently sat down with the soccer star to hear about all things diet, Rio, and what it means to be the first female athlete to serve as a beer ambassador through her partnership with Heineken. Check out what she had to say in this edited version of our conversation.

The Cheat Sheet: In the eyes of a lot of Americans, you were seen as sort of a late bloomer, even though you’ve been playing for such a long time. Why do you think that is?

Carli Lloyd: I wouldn’t say I was a late bloomer. I would just say that I had to score three goals in order to get recognized by everybody. Late bloomer doesn’t sit well with me because I didn’t just show up at the World Cup. I’ve been having success all these years prior to it. I just had to do it a bit bigger in order to get people to notice.

CS: One thing that happened a bit earlier on in your career was getting cut from the junior national team. How did that influence you as an athlete?

CL: I think I was a kid who just kind of let my talent take me as far as it could. Suddenly, you realize that your talent isn’t going to take you all the way to the top. You have to work hard. For me, I was never used to criticism as a younger kid playing, was never used to maybe being benched or put in a difficult situation. So, at the under 21 national team level, when I got cut was the first time I had gone through some sort of struggle in my career and I didn’t know how to handle it.

CS: What changed at that point?

CL: Basically, I was about to quit and my parents sought out a trainer: James Galanis, who I’ve been working with since 2003. He was basically the first person who really kind of identified my weaknesses and told me that if I worked on my weaknesses each and every day, I could go on to become the best player in the world. And to me, that just clicked. Once I started working with him, I was seeing instant results, and I was feeling good about myself. I had a mentor in my corner who was believing in me.

CS: Do you want to talk about the Heineken campaign a little bit?

CL: Heineken brought me on as an ambassador and I’m actually the first female ambassador for a beer company, which I think is pretty huge for a woman in general. And Landon Donovan’s a part of it and David Villa. It’s just an honor to be among the company and the campaign is “Soccer is Here.” I think it just speaks volumes to soccer in America and how far we’ve come.

When I was a little girl, you weren’t watching soccer on TV as much. Then, maybe you could stream some online. Now, it’s not just every four years. Heineken has really kind of helped unite so many people together to enjoy soccer every single day.

CS: How does it feel to be the first woman ambassador?

CL: I actually didn’t know that until I was doing some media for Heineken a few months ago and I was like, “Wow, no female has ever repped a beer company?” They said, “No, not on the level you’re at: a true ambassador.” That’s pretty remarkable. We females … we’re getting there.

CS: Food of any sort must play a lot into your routine. What’s your philosophy as far as diet goes?

CL: Diet has played a role. I think as a kid, you can get away with eating whatever you want. The older you get, at least the older I’ve gotten, the more conscious I’ve become of what I’m putting in my body. I’ve started to train harder. I’ve started to eat better. I’ve really just taken the whole health side of things in my career to another level.

CS: How does your training cycle play into it?

CL: In an off-season, you kind of have to let yourself go a little bit. You can’t, at least I can’t, stay so regimented every single day for the whole year. You could drive yourself crazy, so everything in moderation. In the off-season, I tend to maybe have a cupcake or some fries or a burger. Like I said, moderation is key. It’s not every day.

As I start to get closer to a big event, I definitely start to become more conscious of what I’m putting in my body.

CS: What does a typical food day look like for you?

CL: I wake up and have, now since I’m kind of injured and not playing games, I’ll have an espresso to kind of kick-start my day. I don’t typically have coffee or anything like that while I’m competing because it’s a dehydrator.

I’ll have some egg whites, some avocado, some fresh fruit. For lunch, I’ll either do some salmon or some chicken with a salad and put a whole bunch of things in my salad. And then for dinner, it’s usually sautéed veggies with some sort of fish or the occasional red meat. Sometimes chicken. Maybe some yogurt, granola, and some nuts throughout the day to snack on.

CS: What about for competition days? 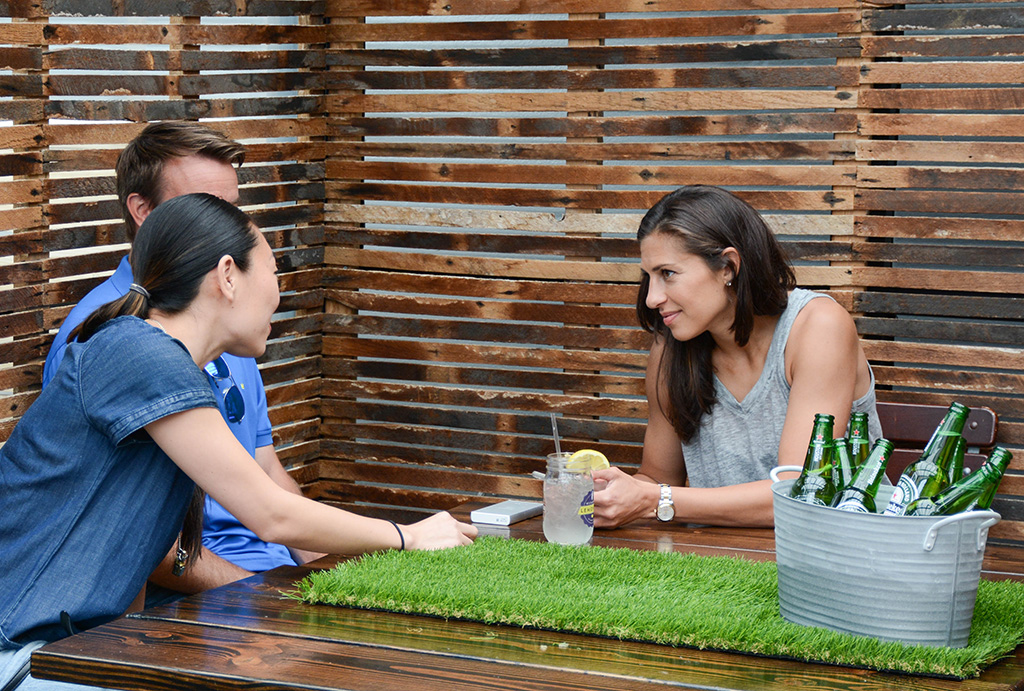 CS: You’re coming back from an injury. Can you walk us through how the healing process has been?

CL: Those first few days of waiting, not knowing what it was or how long I was going to be out, were kind of tough. I knew what I did, I just didn’t know the severity of it. Once I got the diagnosis of three to six weeks, you have to prepare your mind to kick your feet up, and relax a little bit.

It’s actually been really nice. I’ve been kind of go, go, go for many years and I’ve been really busy with a lot of appearances post-World Cup. I really haven’t stopped, so I’ve just given myself some time to decompress, spend some time with my fiancé and my friends and family.

I’ve actually been OK with the injury, for the most part. I’ve been patient. There are some frustrating moments where I wish things would move a little bit faster, but you can’t force things to heal. Your body is pretty amazing and you just have to let it heal.

I have plenty of time for Rio, so it’s all good there. I’m just rebuilding and getting myself fit. I’m going to be more rejuvenated than I probably have ever been in my career.

CS: Are there any indulgences, food or otherwise, you’ve made time for? Getting massages?

CL: Well I try to do a massage on a regular basis. I do the mani and pedi. That’s kind of a standard. I would say my cousin makes really good cupcakes, all different flavors. Every time she comes to visit, she’s bringing some extra cupcakes. It’s really hard to resist them, so that’s kind of my overindulgence.

CS: People really took notice when you scored three goals in the first 16 minutes at the World Cup. What were the days leading up to that like?

CL: It doesn’t change, you know? It’s not what I did two days before or three days before. It was 13 years of hard work. It’s just staying the course and keeping the focus on that destination. I didn’t change a thing. I was just in the zone and was ready and prepared.

CS: With Rio coming up, what are you and the team doing now to get yourselves in the best possible position?

CL: I think we just have to continue our focus. We’re in a good place right now. We have a lot of younger players on the team mixed in with some veteran players, and it’s going to be a different journey than the World Cup. The World Cup is over with. It’s done and dusted. I moved on from the World Cup ages ago and we’re still taking about it, but I’m over it. I don’t just want to be known as scoring three goals in the World Cup Final. Winning this Olympics is the next biggest thing, and we just have to approach it one game at a time.

CS: What are you most looking forward to?

CL: Just another Olympics. I’ve been around the block. I know what to expect. I’m a veteran at it. It’s another opportunity to be a part of something really special.

CS: For all those younger kids who maybe have their own Olympic dreams, what sort of advice would you give?

CL: Well a lot of things obviously have to happen, but you hear so many stories about great professional athletes and how they made it. It really comes back to training when no one is watching and growing up playing out in the streets with friends with no structure, just going out there and having fun. Those are really the building blocks that have helped me. And for players like Michael Jordan, it’s the same thing. Or Kobe Bryant. Those are their stories. You have to be passionate about it and go out there and practice all the time.

CS: So after all these years, is soccer still the most fun thing for you?