Sofia Vergara and Other Popular Celebrities Who Were Teen Parents

From Beyonce to the Kardashian sisters, we hear about celebrity pregnancies all the time. Many of them are carefully planned, and fans dutifully wait 9 months to see the new child in all their million dollar baby outfits on Instagram.

But celebs aren’t too different from the rest of us — they make mistakes, too. And several of them were parents before they were even out of their teen years. Here are the ones who had kids at a very young age.

This former Playboy Playmate of the Year is best known for her lavish lifestyle and, later, her untimely overdose. But back before she was famous, NY Daily News explains she dropped out of high school in her sophomore year and married her boyfriend Billy Wayne Smith. They married when Anna was 17 and Billy was 16 back in 1985, and the following year, they had their son, Daniel Wayne Smith.

This story has an unhappy ending, though. The couple split by 1993, and their son Daniel died of a drug overdose three days after Anna gave birth to her daughter in 2006.

Next: This starlet found out she was pregnant in a gas station bathroom.

We remember the controversy that surrounded this young star’s pregnancy. Jamie Lynn Spears, Britney’s younger sister and Disney Channel star, said she took her pregnancy test in a gas station bathroom, Daily Mail Online reports. Jamie notes she felt extremely guilty for becoming pregnant at just 16 years old, as a lot of young girls looked up to her. Nevertheless, she decided to keep the child. Her and the birth father are no longer together, but she’s been happily married since 2014.

Next: You probably didn’t know this funny star was pregnant young.

Her daughter is now a successful actress and producer. | Ethan Miller/Getty Images

This famous star has certainly had her ups and downs — and she’s been in the spotlight for decades. ArticleBio explains Whoopi married three times total, but now remains single, as she says, “some people are not meant to be married.” She had her daughter during her first marriage to Alvin Martin in 1973, when she was just 18. Now, her daughter Alexandrea is an actress and producer.

Next: This famous talk show host was pregnant at just 14 years old.

Oprah’s opened up a few times about her painful past, but it took her quite a long time to come forward to the public. People reports Oprah was raped and sexually abused as a young child by a cousin and family members. This resulted in a pregnancy at 14, but the baby died just a few weeks after birth in the hospital.

Though Oprah was initially worried about how the news of her past would affect her career, she says coming forward with the truth in 1990 was more liberating than anything. She also says she named her baby Canaan, meaning new land and new life.

Next: You know her for her sister’s extreme fame, but this star was pregnant as a teen, too.

The singer became a mom at just 18. | JP Yim/Getty Images

Beyonce may be the one who’s always in the spotlight, but her little sister Solange also makes headlines. Back in 2004, she had a baby with then-husband Daniel Smith, Us Weekly reports. And she was just 18 years old at the time. As Solange said, “We were crazy, impulsive teenagers. And I was obviously craving some sort of stability.” She split with Daniel back in 2007 and is now married to Alan Ferguson, a video director.

Next: This comic and television star gave her child up for adoption.

You know Roseanne for her funny sitcom and likable personality, but things weren’t always easy for this celebrity. She tells People when she was just 18 years old, she gave birth to a baby girl in Denver, Colorado. After nine days with the child, she gave her up for adoption after realizing she didn’t have the money or resources to care for her.

When her daughter, Brandi, was 17, Roseanne reached out to her after a tabloid said they knew where she was. They have since been reunited and now have a relationship.

Next: This American icon had a child young.

The star had a family at a very young age. | Hulton Archive/Stringer/Getty Images

You know her as the cute child star during the Great Depression, but you may also remember Shirley Temple for marrying extremely young. She was just 15 when she met her first husband, John Agar, and the couple married two years later, NY Daily News reports. When she was 19, Shirley gave birth to her daughter, Linda Susan. Sadly, her marriage dissipated after just a few years, but she then went on later to have more children with her second husband.

Next: This country singer supported her two girls as a single parent.

As Ashley Judd recounts in her memoir, growing up with her mother, Naomi, struggling to make ends meet was not easy. ABC News reports Naomi was only 18 when she had her first child, Wynona, with her then-boyfriend who abandoned her. And just four years later, she had her second child, Ashley — though the relationship with that man didn’t work out either. She ended up raising both of her daughters as a single parent. Luckily, Wynona and Naomi found success in singing, which catapulted the family to fame.

Next: This famous rapper was the father of a child at just 17 years old.

He’s one popular pop for sure. | Kevin Winter/Getty Images

You know this rap star for his catchy tunes, but he’s also no stranger to fatherhood. In Touch Weekly says Lil Wayne is the father of four children, each one with a different mother. His oldest, Reginae, is 18 now, meaning he had her with Toya Wright when he was just 17.

And as for how Reginae is doing, she says growing up with a famous father was amazing and that Wayne’s a great dad. “Just walking in the house and seeing Drake or seeing Nicki [Minaj] is something that’s totally normal to me,” she comments.

Next: This famous singer had her first child at just 13 years old.

The mom of four became a mother very early on. | Alex Wong/Getty Images

You know this singer/songwriter for her big, booming voice, but she also has a very dark past. The Inquisitr reports Aretha became pregnant from a boy she knew at school at just 12 years of age. She gave birth at the age of 13, and then at 14, she had a second child with someone else. She raised the two children with the help of a few of her family members. But she led a tumultuous life filled with drinking and partying after that due to what her sister Carolyn saw as “deep, deep insecurity.”

She went on to have four children total. And the good thing is we know Aretha overcomes all odds and becomes one of the greatest soul singers to date.

Next: You probably didn’t know this classic actress had a child young.

Can you believe Somers’ son is in his early 50s? | Vince Bucci/Getty Images

If you were a fan of Three’s Company, then you’re familiar with this actress and model. What you may not have known, however, is that Suzanne had a child at just 19, CafeMom reminds us. When she became pregnant, she married her boyfriend at the time, Bruce Somers, and dropped out of college. The two split shortly after, leaving her to raise her son by herself, but she still made it work.

Next: We bet you didn’t know this basketball player was a father this young. 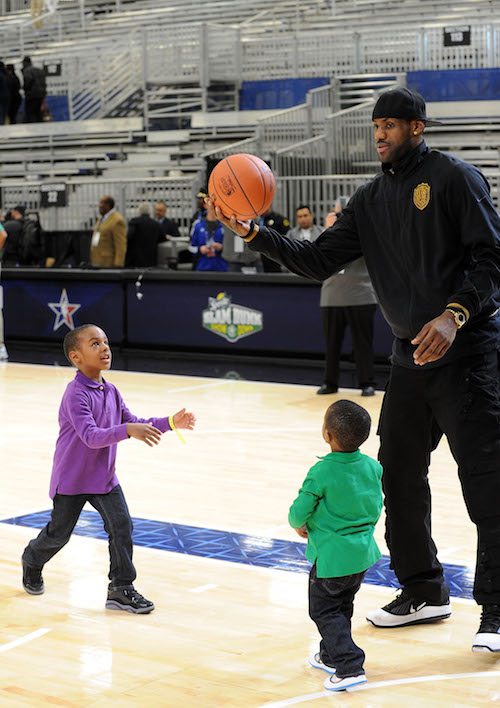 A family that loves playing basketball together. | Jason Merritt/Getty Images

Since LeBron didn’t know much about his own father, he knew he wanted to be able to provide for his children when his then-girlfriend became pregnant. Cleveland.com explains this basketball star craved structure and stability for his family. So when he was a father at just 19, he was present in their lives and willing to go the extra mile.

His then-girlfriend, Savannah, is now his wife, and together, they have three children total.

Next: This Game of Thrones star also was a teen mom.

Keisha Castle-Hughes stopped working for a while to raise her child. | Sandra Mu/Getty Images

You probably remember her as one of Oberyn’s spear-wielding children in Game of Thrones, but for awhile, this young actress stayed out of the spotlight when she became pregnant. People explains Keisha had a baby at just 17 with her boyfriend at the time, Bradley Hull.

As for her decision to keep the baby even at such a young age, she said,  “Once I found out I was pregnant there was no decision really. I was shocked but it was just like, ‘Okay, we are having a baby. That’s great.'”

Next: She’s Emmy-nominated, and also was a mother young.

The Modern Family star had her son at just 19 — and as she says, at the time, she “had the energy for everything.” Sofia also notes her son was easy to raise, as he was supportive, helpful, and made it easy for her to work and become successful. She married the father of her child at just 18 years old, too. Unfortunately, the marriage only lasted a couple years, Us Weekly reports.

As for more children in her future, Sofia says it’s something her and her current husband have considered.

Next: The “MMMbop” star is also known for being a teen dad.

The Hanson brothers are known for a few catchy hits in the late ’90s. And back in 2002, the middle Hanson brother, Taylor, fathered a child with his wife, Natalie. Taylor was just 19 at the time, and Natalie was 18. Though young, Taylor said, “Having Ezra is the best thing we’ve ever done. Life and art are all about these moments,” MTV News reports. The couple now have five children total.