It’s common to fawn over attractive actors, musicians, and athletes from afar, only to become jealous at the site of a gorgeous actress on their arm. We doubt these celebrities’ wives, partners, and girlfriends are the ones you need to worry about — but you should be cautious when it comes to their mothers.

These stars are self-admitted mama’s boys. From tattoo tributes to songwriting shout-outs and everything in between, they know how to show their love for their day ones in style. Just wait till you see what star still has his mom do his laundry (check out No. 1). 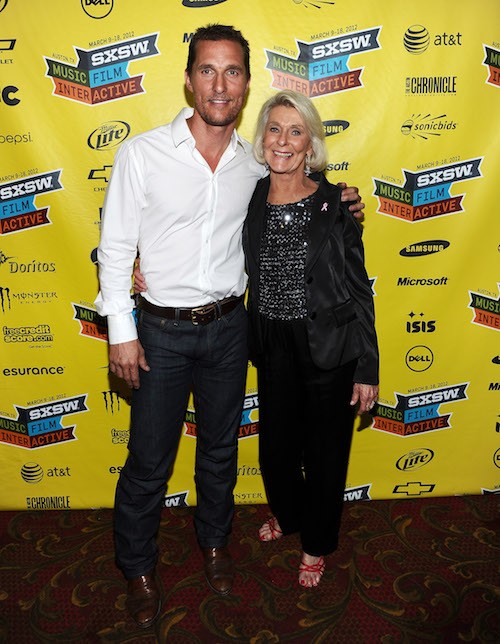 His mother thinks the world of him. | Michael Buckner/Getty Images

McConaughey brings his mother as his date to everything from Fleetwood Mac concerts to the 2014 Oscars. He even dedicated part of his speech to her after he won the Oscar for best actor. “To my mother who’s here tonight, who taught me and my two older brothers — demanded that we respect ourselves. And what we in turn learned was then we were better able to respect others.”

His mother is equally fond of him. “Matthew makes me proud because he is very humble and sincere and a very thoughtful person,” she said. “He is just a great son.” We’re glad she thinks so, considering he and his family moved to Austin, TX to be closer and spend every weekend with her.

Next: This famous bachelor will never hide his love for his mom.

Leo DiCaprio may be one of Hollywood’s most famous bachelors, but there is one woman who will never relinquish the key to his heart: His mom, Irmelin Indenbirken. DiCaprio brought her as his date to the red carpet premieres of What’s Eating Gilbert Grape, Romeo and Juliet, Titanic, and has sat with him at countless Oscar and Golden Globe ceremonies.

DiCaprio has described his young life in a “rough neighborhood in East Los Angeles” and credited his mother as the person responsible for his career. Maybe that is why he outbid Paris Hilton on a $13,000 Chanel bag at a charity auction in Cannes just to give to her.

Next: This actor loves to make his mom happy — buying her a car probably didn’t hurt.

He may look tough, but he has a soft spot for his mother. | Patrick Riviere/Getty Images

The Rock loves to show just how much he adores his mother. Whether he’s posting an Instagram picture for Mother’s Day, taking her as his date to a premiere, or surprising her with a brand new car, Johnson knows how to pamper his mom.

His favorite thing to do is just to make his mother happy it seems. “I asked her, ‘Are you happy, ma?’ he recalled asking her on a flight while they were waiting for their breakfast. “‘Yes, son I couldn’t be happier,'” she said.

Next: He might be a ‘Man of the Woods’ but he’s also a total mama’s boy.

He often invites his mother to events. | Kevork Djansezian/Getty Images

Justin Timberlake and his mother aren’t just close in age (she had him when she was 20), they’re close in real life, too. “We have a very special relationship,” Timberlake told Rolling Stone. “She’s been my best friend since I figured out who I wanted to be. You keep searching for somebody as good as your mother, and that’s a losing battle.”

Timberlake preached that his mother was his “day 1” and that it was “them against the world.” To show it, he even got her initials tattooed on his back.

Next: This celebrity is definitely the closest with his parents — literally.

He lives with his parents. |  John Sciulli/Getty Images for NAACP Image Awards

The Black Panther star took a lot of heat recently for “still living with his parents” when in fact, his parents technically live with him. He purchased a Spanish-style mansion in Los Angeles’ San Fernando Valley to fulfill one of his “biggest dreams” of buying his parents a house. That’s one way to show your mom and pop you love them. While they’re clearly close, the roommate life doesn’t come without its struggles.

“I love my parents, but we have a roommate relationship right now, which is interesting,” he told Ellen Degeneres. “You get home-cooked meals, but then you also have random trips to the kitchen in the middle of the night. Just the random run-ins that just might be a little uncomfortable from time to time.”

Next: He only loves his bed and his mama, he’s sorry.

Drake is a total momma’s boy. | Drakes__mom via Instagram

Rapper Drake (whose given name is Aubrey Graham) has been called a “mama’s boy” in the past for his perceived sensitive nature. It’s a label we bet Drake accepts with pride, considering how often he flaunts his love for his mother. “She’s brought me to this point single-handedly…She’s the most important person in my life,” he once said.

Drake dedicates more than just his Instagram posts to his mother: he dedicates his music. His track “You & The 6” is a clear tribute to his mom and his Canadian roots. As for the other ladies in Drake’s life, it seems they’ll always come second to Sandi. “I only love my bed and my momma, I’m sorry,” he reminds us on “God’s Plan.”

Next: The award for biggest mama’s boy goes to…

The former “JoBro” built his career on a close musical relationship with his band of brothers. Now a solo artist, it seems the one relationship he’s focusing on is that with his mother.

Jonas spoke with E! News in November 2017 and revealed one of the things he loves about visiting his mom at home.  “I ask my mom to do my laundry,” he said. “She does it every time with a big smile! Now that her four sons are out of the house and have their own lives, any chance she gets to be mom again I think it’s a really nice thing for her.”