Just when we thought the Stormy Daniels allegations couldn’t get any bigger, they did. Daniels said that a man approached her in 2011 and threatened to harm her if she said a word about the alleged Trump affair. She later released a sketch, and it put one incredibly famous athlete in hot water. Check out page 4 for the latest details.

Next: Stormy causes a storm anywhere she goes.

She can’t go anywhere without a media frenzy following her

The media attention on Stormy Daniels has been insane. | Ethan Miller/Getty Images

After Daniels’ interview on 60 Minutes aired, the scandal broke wide open. And within the next few weeks, she couldn’t go anywhere without causing a whirlwind of media coverage. She appeared at a court hearing for Trump’s lawyer, Michael Cohen, over documents seized by the FBI. The hearing did not directly involve Daniels, but when reporters realized she had arrived, they couldn’t leave her alone. And the next day, Daniels was on The View to share her story and what has happened since the affair took place.

Next: She recently claimed her life was threatened back in 2011.

She claimed someone tried to keep her quiet back in 2011

She has shared the horrifying incident that forced her to keep quiet. | Ethan Miller/Getty Images

On The View, Daniels said that someone approached her in a parking lot in 2011 and threatened her life. The man supposedly said that Daniels’ daughter was a beautiful little girl, and, “It would be a shame if something happened to her mother.” She said she couldn’t go to the police because that’s exactly what the man had warned her not to do, and her husband at the time was unaware of the affair. Daniels was worried her husband would see her as a bad mom who put their daughter in danger, so she kept quiet.

Next: People are going crazy over whom the sketch resembles.

And the sketch she released looks a lot like Tom Brady

The man in the sketch reminded everyone of a certain athlete. | The View via YouTube

On The View, Daniels released a sketch that had been drawn up based on what the man looked like. It didn’t take long for social media to come up with the idea that the man in the parking lot was actually Super Bowl MVP Tom Brady, the quarterback for the New England Patriots. We think it couldn’t possibly be, but Trump and Brady actually do have a past.

Next: Brady and Trump are longtime friends.

Brady and Trump have been friends for years 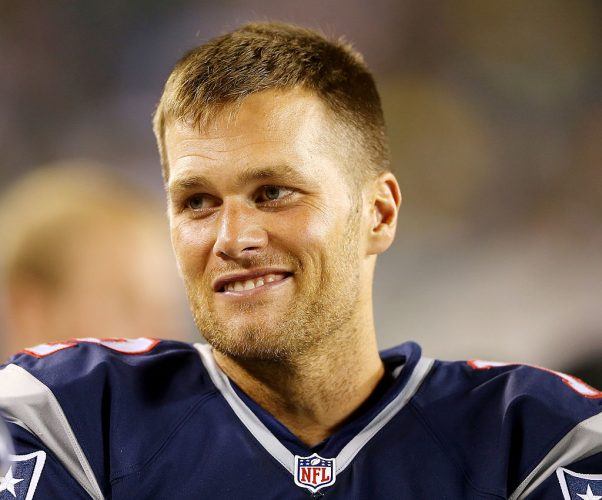 Coincidently, the two actually know each other. | Elsa/Getty Images

Donald Trump made several comments before and after his campaign about his friendship with Brady. According to Sports Illustrated, Trump said at his Inauguration Day dinner that Brady called just to say congratulations that he “feels good” about Trump winning the presidency. Kellyanne Conway also brought Brady into the mix when she was talking about some of Trump’s most loyal friends. And when Brady was asked about the friendship, he simply asked why it mattered. If he is the mystery man in the sketch, then it definitely matters. But although he resembles the penciled man, few people are convinced that it’s actually him.

Next: But Trump had some choice words for the sketch.

But Trump calls the sketch a ‘total con job’

Trump did not comment on whether or not he thought the sketch looked like Brady. But he did say that it was completely made up. He tweeted, “A sketch years later about a nonexistent man,” the morning after the drawing was released. Trump also said that Daniels was simply playing into the fake news media; he also claimed the media was fully aware that her story was “fake.”

Next: Here’s who some suspect the sketch could be.

Some hinted that the sketch could be of Daniels’ ex-boyfriend

Some people were quick to spot a resemblance. | Shenna Fox Music via Instagram

Trump has not commented much on the ongoing Daniels case. His tweet was the first time he semi-directly addressed the matter. But he didn’t have good things to say about it. Someone on Twitter also likened the sketch to a man Daniels was previously photographed with, presumably her ex-boyfriend, but the former boyfriend’s name was not given in the tweet. Truthfully, the mystery man will likely remain a mystery.