Stunning Wedding Photos From Donald Trump’s 3 Marriages (Plus, Which Wedding Cost the Most)

President Donald Trump, 71, has been married to wife Melania Trump, 47, for more than a decade. The two have shared an extravagant lifestyle, living in a gold-covered New York City condo and jet-setting to and from Palm Beach. As you may know, Donald tied the knot twice prior. For the weddings of Trump’s 3 marriages, true to his top-dollar lifestyle, he spared no expense.

Here we’ll share photos from each of Donald’s lavish weddings. See which bride wore a dress that cost an amount which could probably pay off your house and then some (page 6). We’ve also included a rare photo showing the women who married Donald hanging out together (page 7).

While barely any photos are available, Ivana did later share one snap. It shows the smiling couple flanked by their parents. Ivan wears a simple, white 1970s-style dress with a rounded, tied neckline and ruffled sleeves. An elaborate flowery headband adorned her head.

Cost of Donald and Ivana’s wedding 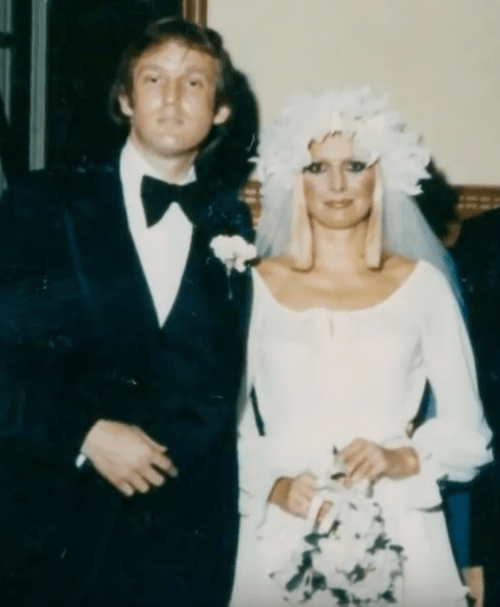 As we mentioned, little is known about Donald and Ivana’s wedding, including the cost. Much more has been written about the couple’s 1990 divorce. Trump paid Ivana $14 million cash, $350,000 in yearly alimony, and $300,000 per year in child support. Ivana also got their mansion in Greenwich, Connecticut and an apartment in Trump Plaza.

Next up: Donald and Marla Maples

Donald Trump’s second wedding was as snazzy as his first. | Hot News 24H Today via YouTube

Donald married Marla Maples, then 29, in 1993 at the Plaza Hotel’s Grand Ballroom in New York City – conveniently owned by Trump. Around 1,100 guests attended the event. The media gave it much attention  — likely in part because the two began their relationship while Donald was still married to Ivana.

The bride wore a white silk long-sleeve Carolina Herrera wedding gown with a 325-diamond tiara and with a bouquet of pink roses. Celebrities like O.J. Simpson and Rosie O’ Donnell attended.

Cost of Donald and Maples’ wedding

The bride enjoyed the day with her new hubby. | Hot News 24H Today via YouTube

Here are some elements from Donald and Marla’s luxurious wedding that made up the hefty $1 million price tag:

By the time the couple were married, Maples had had already given birth to Tiffany Ariana (their only child together). They divorced after four years. They didn’t see eye-to-eye on many topics, Maples said of the breakup. She received $1 million, property and child support.

Next up: Donald and Melania

Donald likes to go all out on his weddings, that’s for sure. |  Maring Photography/Getty Images/Contour by Getty Images

Is the third time the charm for Donald? He married Melania Knauss, a Slovenian-born model, in 2005. After the ceremony at an Episcopalian church, the couple and their guests partied at Trump’s Mar-a-Lago estate (are we seeing a pattern here?) which he purchased in 1985 for $5 million. A 36-piece orchestra entertained the crowd, and singers Tony Bennett and Billy Joel also performed.

Melania wore a custom Christian Dior gown with a 13-foot train, 16-foot veil. Embroidered with 1,500 rhinestones and pearls, the dress weighed 60 pounds. Because it was so heavy, she changed into a silk tulle Vera Wang dress for the after-party.

Cost of Donald and Melania’s wedding

This wedding cost a pretty penny! | Melania Trump via Twitter

These elements made up the hefty price tag of Donald and Melania’s luxurious wedding:

The two have a son, Barron Trump, who was born in 2006. Although as president, Donald has joked about Melania leaving him, the marriage is still intact.

Next: See the wives together.

Have all of his wives been together at once?

If all three ladies found themselves in the same room, it would sure be awkward. | Photo by Jamie Squire/Getty Images

Since we don’t know the cost of Donald and Ivana’s wedding, a true price comparison of the three is impossible. However, it might be safe to say that of the other two weddings, Maples and Donald’s was pricier. If both price tags were $1 million, the 1993 one would be pricier than the 2005 one, factoring in inflation.

All prices aside, we thought it would be interesting to see if the three women have ever been in the same room with Donald at once. The closest we could find was Ivana and Melania together in 2001 (with Donald and Ivanka) watching Venus and Serena Williams play in the U.S. open. (Since then, they’ve been together at weddings as well.)