Ordering Takeout: The Unhealthy Mistakes You Need to Stop Making

When you don’t feel like making dinner, but you also don’t feel like going out, ordering in is your next best option. It’s great to be able to tell someone else what you want and have it handed to you within the hour, after all. There are downsides to going the takeout route, though. As with ordering food at a restaurant, ordering in comes with a series of choices. Is it even possible to eat healthy when choosing takeout options?

The next time you’re feeling a bit lazy, you can at least feel good about what you ordered.

A gourmet chicken sandwich is easy to customize. | iStock.com/loooby

When ordering takeout goes digital, everything changes. There are both pros and cons to ordering takeout online. Restaurant professionals told Fast Company that online ordering is great for the restaurant business because people tend to purchase more food with each order. But there’s also a hidden advantage for the person ordering: You are in more control over exactly how you want your food prepared.

This means you have the freedom to remove and add items as you please, without worrying about your demands coming off as unreasonable.

2. Giving in to peer pressure 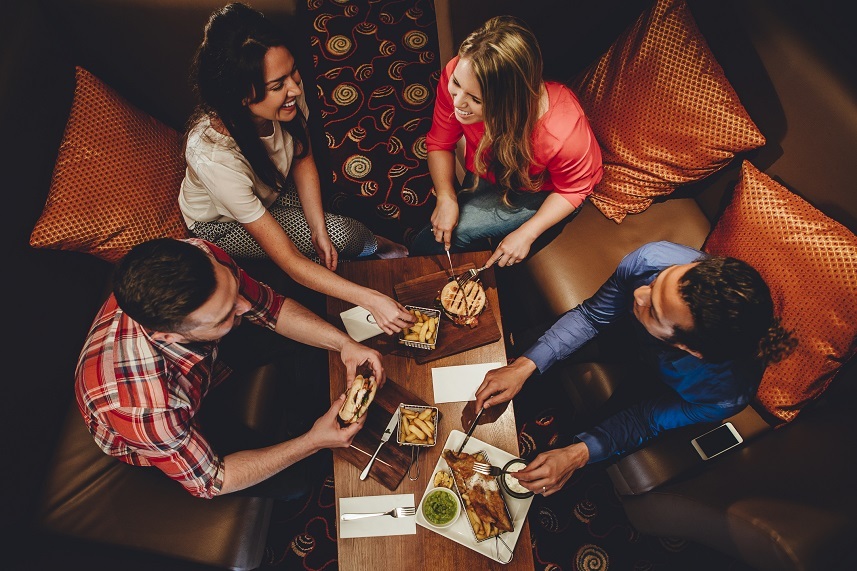 Your pals can be a bad influence. | iStock.com/DGLimages

Peer pressure has a major influence on your food choices, according to a study from the University of Illinois. Results from the research suggested that people who order the same thing or something similar to what their friends are having are actually happier with their choices. So, even if you’re trying to eat healthier, you’re much more likely to settle for cheap, greasy pizza if that’s what your friend wants delivered to your door.

If your friend wants pizza, but you’re just not feeling it, you’re allowed to order food from somewhere else. Focus on ordering what you want instead of going along with what everyone else wants. You’re still participating in the fun — your plate just might look a little different.

3. Eating everything all at once

It’s already in a container, so save some for later. | iStock.com/monkeybusinessimages

How much of a food you eat, even when it’s healthy, matters. According to Critical Reviews in Food Science and Nutrition, the portion sizes of foods largely affect a person’s energy intake, or how many calories they consume. Larger portion sizes, according to the journal Circulation, result in increased energy intake, which often results in weight gain.

Don’t eat everything you order when it first arrives, even if you’re only ordering for yourself. That container of orange chicken alone is meant to feed anywhere between four to eight people. There’s only one of you. Leftovers are your friend.

Cheesy breadsticks are not the wisest option. | iStock.com/Kwangmoozaa

When it comes to ordering Italian food, breadsticks are a must — right? Sadly, meal add-ons like bread and chips are loaded with processed carbs, which can lead to overeating because these kinds of carbohydrates tend to be lower in fiber. Why? The Journal of the American Dietetic Association notes high-fiber foods are digested more slowly, which increases feelings of fullness.

Without these added benefits, eating all those carbs is just going to fill you with added sugar and calories, and you’ll still feel hungry after your meal.

5. Saying no to your food cravings

Food cravings are rooted in psychology. According to a study published in Science Reports, this may have a lot to do with specific food cues. You eat pizza often. Your brain starts to recognize that eating pizza makes you feel good. Therefore, you are more likely to crave pizza specifically. While you might take this to mean you’re going to have to work 10 times harder to overcome your cravings, it’s possible you’re better off ordering the food you actually want anyway.

6. Going for the low-carb options

Spaghetti and homemade tomato sauce are OK every now and again. | iStock.com/EzumeImages

Low-carb diets get a bad rap. But they’re actually more effective for lowering heart disease risk than other popular diets, according to The Journal of Clinical Endocrinology & Metabolism. The issue is the phrase “low-carb” is often treated as if it were the latest cure for every disease under the sun. Eating low-carb foods can be good for you — as long as you’re eating plenty of quality protein and healthy fat to make up for it.

Eating in front of the TV is a serious don’t. | iStock.com/monkeybusinessimages

People tend to eat more calories when distracted, according to the American Journal of Clinical Nutrition. So while your plan to order takeout and lose yourself in a movie sounds great in theory, you might end up eating more than you planned. This is partially due to the fact that feelings of fullness set in slowly. A study from the Journal of the Academy of Nutrition and Dietetics suggests that eating slowly could fill you up faster, therefore decreasing your chances of overeating. You waited 30 minutes for this pizza to get here. Take the time to enjoy every bite.

You should probably skip the soda. | iStock.com/rez-art

Everyone loves to use ordering food as an excuse to just go for it. This can really bring down the nutritional quality of your whole meal, though. A large percentage of your calories during a meal — especially when ordering in — comes from sugary drinks. According to Obesity Reviews, sugar-sweetened beverages are a major contributor to obesity. They’re filled with empty calories, have little nutritional value, and are more addicting due to their high sugar content. Save money, and calories, by drinking some tap water instead.

Be mindful of calorie counts on menus. | iStock.com/dmbaker

Unfortunately, including calorie counts on menus doesn’t actually convince people to eat less, according to the American Journal of Public Health.

It’s all in the preparation — and it tells you right there on the menu how it’s prepared. Foods are fried, boiled, creamy, breaded, buttered, and loaded. You don’t have to be able to decode food ingredient lists to eliminate a menu’s unhealthiest options. Keep an eye out for words like “baked,” “roasted,” or “grilled” instead of fried. Choose dishes that are seasoned, fresh, or light. Be wary of casseroles, platters, and anything covered in a white sauce.

10. Choosing gluten-free options when you don’t have to

Not all gluten-free options are smart, so be careful about what you choose. | iStock.com/Alleko

Many people wrongfully assume gluten-free foods are automatically healthier than foods containing wheat, barley, or rye. This isn’t the case. Research published in Gastroenterology found no evidence that gluten is the cause of symptoms in people without celiac disease. It’s not so much avoiding gluten is bad: It’s the foods people tend to eat when they go gluten-free that are often problematic.

From menu to plate, making healthy choices gets easier once you know what to look for — and what to avoid. Learn from your mistakes, choose the best options you can, and don’t forget to enjoy your meal!