Terrifying Health Concerns That Show Up in Your 50s

If you exercise, eat well, and take care of your body, you can beat almost anything, right? Good health practices are important, yes, but there are some health concerns that arise with age regardless of your diet and activity level.

These terrifying health concerns become more prevalent in your 50s. Yes, age is just a number — but 50-year-olds may want to pay close attention to the symptoms of these 15 diseases and maladies.

You’ll need to watch out for this common virus. | iStock.com/ Sam Edwards

The common infectious virus, which can lead to mononucleosis, transmits extremely easy. And, according to the New England Journal of Medicine, about 95% of adults over 30-years-old carry the virus. A Duke University Medical Center study found that since Epstein-Barr virus (EBV) can affect you asymptomatically for your entire life, it may have serious implications for people over 50.

EBV can stay in your body long after you get rid of mono and can reactivate months or even years later. Rare cases of EBV are associated with serious conditions and several types of cancer including stomach and nasopharyngeal cancer.

Next: We hope you’ve been drinking your milk.

Aging itself leads to worn-down cartilage and joints. However, sedentary people have a much higher rate of osteoporosis than those who have stayed active. An estimated 20% of women 65 – 74-years-old have osteoporosis, and just breaking a bone in your 50s is considered a risk factor.

Osteoporosis is known as the “silent disease,” indicating how most people don’t realize their bones have actually been losing strength for years. Build strong bones with strength training, a vitamin D-rich diet, and regular stretching to lower your risk.

Next: You probably think this is inevitable, but there are ways to prevent the common ailment

Unfortunately, you may develop chronic pain over time. | iStock.com/halfbottle

As you age, most people assume that chronic pain — whether it be arthritis, back pain, or tendonitis — is inevitable. While it’s certainly more common, there are still ways to prevent it. Over one-third of adults in their mid-50s reports chronic pain in their neck or back.

You can prevent chronic pain by managing your sleep schedule, trying to reduce stress, and exercising a healthy amount.

Next: Multiple factors — including age — play a role in weight gain.

Your metabolism slows down as you age, making losing weight at 50 a much more difficult feat than it was in your 30s and 40s. The hormonal changes that occur during menopause make women more susceptible to weight gain.

The lifestyle and genetic changes associated with age also drive weight gain in your 50s. Ashley Simmons, M.D., called your 50s “a time to keep close tabs on weight fluctuations.”

Next: We hope you’ve been flossing.

It isn’t just a side-effect of terrible oral habits — the National Institutes of Health reports your risk for severe gum disease doubles when you hit 50. Symptoms of the periodontal disease, gum disease’s official title, include persistent bad breath, tender gums, and difficulty chewing.

You risk losing your teeth and acquiring a serious gum infection if you don’t treat gum disease properly. Floss often, brush your teeth at least three times a day and befriend mouthwash to reduce your risk.

Next: This early-onset condition may affect your quality of life.

Most Alzheimer’s sets in after 65-years-old. Early-onset AD, which affects at least 5% of Alzheimer’s patients, strikes in your 50s. The risk of early dementia is linked to genetic mutations, meaning it tends to run in your family.

An early-onset AD diagnosis is nothing to take lightly — while the disease has a serious impact at any age, early AD patients must cope with how the diagnosis will affect their work life, family, and personal health.

Next: It’s important to take care of your eyes.

Need glasses? This could be why. | Eyeglasses.com

Most people need reading glasses as they age as a result of how your eyes stiffen. You’ll likely notice glare-sensitivity and decreasing night vision as you get older, but it’s uncommon you’ll lose sight completely.

Adults 40 years and older with diabetes, a family history of eyesight loss, and who take thyroid medications are at higher risk of developing vision problems like glaucoma or macular degeneration.

Next: The leading cause of death in older adults can rear its ugly head early on.

Many people 50 and older will begin to develop the early signs of heart disease. Heart disease is the leading cause of death in adults 65 and older, but it is the decisions you make in your 50s that can seriously affect your heart health as you age.

Women diagnosed with heart disease at 50-years-old can expect to live around 8 years, while men have a life-expectancy of around 7 years.

Next: Your likelihood to develop this mental disorder increases due to a number of factors.

A Gallup poll on depression treatment in the U.S. relays a staggering statistic: people 50 years and older may be more likely than any other age group to have depression. While depression is often viewed as a genetic disease (and genetics definitely play a role in risk), most research suggests it’s caused by a combination of psychological, biological, and environmental factors as well.

Depression can be triggered by a number of things that are more likely to occur in your 50s: the death of a close relative or friend, divorce, or money struggles, for example.

Next: This cancer is most likely to appear in your 50s and 60s 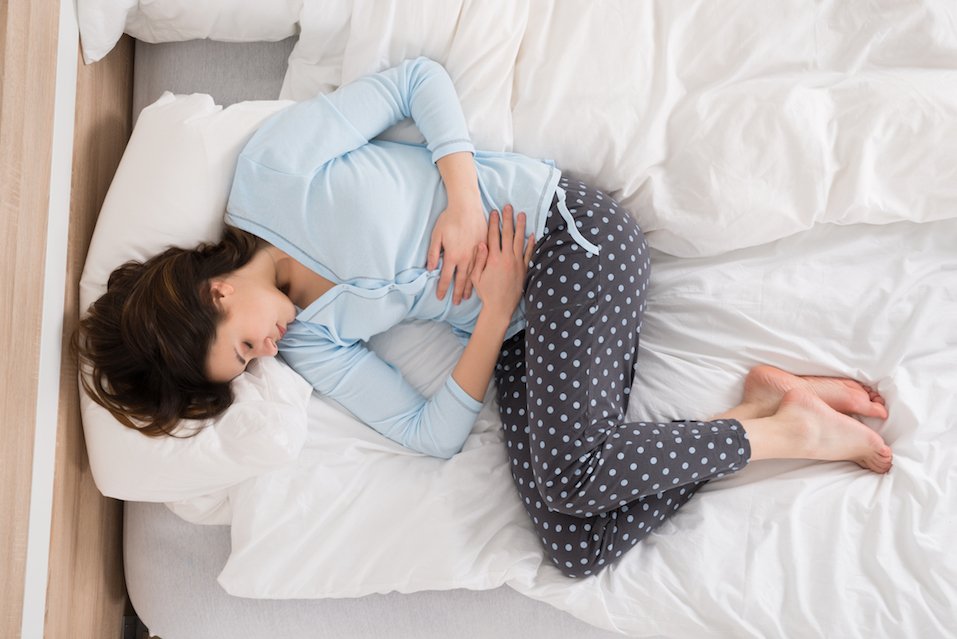 You should definitely visit your doctor if you have any unusual aches or pains. | iStock.com/AndreyPopov

Ovarian cancer can strike women at any age, however, it’s most likely to appear during your 50s and 60s. Warning signs of ovarian cancer include pelvic pain, bladder changes, and bloating. The American Cancer Society recommends all women over 40, especially those with a family history of ovarian cancer, get annual pelvic exams to increase chances of early detection.

While there are no definitive ways to prevent ovarian cancer, doctors recommend taking birth control, since studies show women who use oral contraceptives may reduce their risk.

Next: Men are more likely to develop this with age.

Keep your diet clean to avoid this disease. | iStock.com

Doctors have blamed ED on multiple factors, the highest-ranking among them psychological problems, aging, and physical factors. Some research shows that adopting a Mediterranean diet rich in fish, veggies, and olive oil, as well as exercising can help with ED.

Next: Choices you make in your 20s and 30s will affect if you develop this in your 50s.

Make sure to wear your sunscreen. | Charly Triballeau/AFP/Getty Images

People who indulged in tanning, neglected sunscreen, and shirked dermatologist appointments may notice skin abnormalities as they reach 50. Cancer Research UK shows that over 10,000 people aged 55-plus were diagnosed with the most serious form of skin cancer in 2016. The data also showed that melanoma rates in people 50-plus have doubled over the last two decades.

Next: Noise-cancelling headphones may not be a bad idea.

All those concerts you went to at a young age may have lead to this. | Blackzheep/iStock/Getty Images

Nearly half of Americans 65 and older experience hearing loss, however, you may notice early signs in your 50s. Physicians expect noise-induced hearing loss prevalence will increase for younger generations as they age. Most people notice they lose their ability to hear high-frequency sounds first followed by hard, high-pitched consonants.

One in seven adults 50 years and older wears a hearing aid. Johns Hopkins researchers believe hearing loss is severely undertreated in Americans. Frank Lin, M.D., believes that adults in their 50s are the people who need hearing consultations the most. “These people are still working and going to meetings.”

Next: This cancer risk also increases with age.

The statistics for breast cancer are staggering. | Megaflopp/iStock/Getty Images

The risk of developing breast cancer increases with age. One in 40 women will get breast cancer in their 50s: breast cancer rates rise as menopause hits. It becomes more crucial than ever to adopt healthy lifestyle habits in this decade.

Next: Eating well becomes more crucial than ever before.

This disease is preventable if you treat your body well early on. | Sajjad Hussain/AFP/Getty Images

You can develop diabetes at any age, but your risk increases as you get older. More than one-fourth of people over 60 have diabetes in the U.S. and adults aged 45 to 64 were the most-diagnosed age group for diabetes in 2012.

Diabetes can lead to nerve, kidney, and heart complications that increase your risk of early death. Doctors recommend you get regular check-ups to determine potential blood sugar irregularities since diabetes can be asymptomatic. Early signs of diabetes include extreme hunger and thirst, fatigue, and blurry eyesight.