15 Thanksgiving Traditions We Can All Get Behind

Everyone has their own personal holiday traditions that they have been practicing for years with their families. Some of them are tedious, while others are downright awesome. We took the time to dig up some of those Thanksgiving traditions that would be wonderful for you and your family to do!

Fish Night was one of my favorite memories growing up. | ViewApart/iStock/Getty Images

We’ll start this off with a personal tradition. One of my favorite traditions with my family was that we’d have a feast the night before Thanksgiving. We called it “Fish Night” and it was open to all our family friends. During that night, everyone would bring over a fish-inspired dish, sort of like a potluck. We’d have Dungeness crab in the shell, crab cakes, smoked salmon, oysters, and my personal favorite, “soup de poisson,” or “fish stew.” It sounds way better in French.

Fish Night is by far my favorite family tradition, and I actually think I like that more than Thanksgiving. There is no pressure of having to get to the stores the next day, most people are relaxed, there’s less of a chance of political spats, and there was always just more fun to be had.

Next: Remind yourself of what you are thankful for.

Being thankful is one thing, but remembering what you were thankful for before is a whole other thing. | Tom Merton/ Getty Images

It’s fairly simple. Have everyone take the time to write down what they are thankful for each year in the book and bring it out again the next year. After everyone writes down what they are thankful for, pass the book around to read previous entries. Keep on going long enough in your family and you can see a person’s priorities and how they change over time. Some memories will be hilarious and others will be cringeworthy. Regardless, it will become one of those amazing holiday traditions for you and yours.

Next: Sometimes, you just need to take a walk.

13. Cut out some alone time

A long walk alone does wonders for your stress. | Armend Nimani/AFP/Getty Images

There is so much pressure surrounding Thanksgiving and all the things that have to happen to get dinner right. Add to that the stress of having all your family in town and the burden to engage with them. It can all become too exhausting for some. This generally leads to family feuds and shouting matches. That’s why it’s so important to take some time for yourself during the day.

Some people get the prep done in the early morning with enough time to spare to go home and relax away from everyone for a little while. Some people go on long walks through the woods. Whatever your method is, just take some time for yourself.

12. What about eating Thanksgiving dinner … at dinner?

Why on earth do we eat so early!? | John Moore/Getty Images

I’ve always found it very confusing when a significant other told me that we have to be at their parent’s house for Thanksgiving dinner at dinner time (Around 8 p.m. for us). It turns out that there’s an explanation we won’t go into about why dinner is served so early on Thanksgiving. But it’s way better to eat dinner at dinner.

When you push the dinner back to a later time in the evening, it gives the family more time to attend to everything during the day. It allows for last minute runs to the store, collecting the family, seeing other people that day, and avoiding unnecessary traffic in some cases. Besides, you’re just going to be hungry again later on anyways. This is just another one of those traditions that lead to a better time with less stress.

Next: What if you could just stop cooking altogether?

It seems really weird that anyone would want to go out to a restaurant on Thanksgiving, but it’s not. A lot of people eat out on Thanksgiving and have made a tradition in doing so. Eating out is so much less stressful and (believe it or not) less costly than cooking at home. Plus, you don’t have to do the dishes, you’re home isn’t ravaged, and you can just walk away from the table when you’re done and never think again about it. “But what about the leftovers!?” you may ask. Everyone has leftovers and hopefully you surround yourself with people who like to share.

Next: Forego your Thanksgiving for those in need.

This seems like it should be a no-brainer, but it is hard to convince the entire family to go out in the service of others on an earned holiday break. Volunteering is one of the most rewarding things you can do for yourself in the most unselfish manner. It doesn’t have to be your bag, we just suggest you give it a try.

Next: You don’t have to be alone.

Friends-giving is pretty well known, but should still be a part of your holiday traditions. | Shironosov/Getty Images

Sometimes people aren’t able to make it home to their families and they’re usually left behind. As sad as that sounds, it happens all too often. So, why not start a tradition of “Friends-giving” where you get all your friends together for a large feast without the burden of familial ties? It’s a really nice tradition that can happen any time around Thanksgiving. It doesn’t have to be on the same day. Everyone wants to be around people they love on the holidays, so why not create a new tradition with the friends you love?

My family has been doing this for years. | Robert Sullivan/AFP/Getty Images

This tradition comes with a few caveats. Don’t engage in this tradition if any of the family members suffer from some form of gambling addiction, and don’t play with your hot-headed uncle or brother. That being said, it’s an awesome family tradition that my family has been doing for years. Nothing too serious —  just a $20 buy-in of Texas hold ’em. Allow for one re-buy and that’s it. Trust me — this is a great way to get the family off their phones and engaging with one another.

Next: Why stop there!?

It’s a great way to be invested in the game if your team isn’t playing. | Paul Bradbury/Getty Images

NFL games are an American past time and are almost synonymous with Thanksgiving. So why not make the game a little more interesting by putting some money on the outcome?

The best way to do this is to make a 10-by-10 grid on some paper. Have each square be worth a dollar or two. People can buy a square and fill in their name. After all the squares are filled up, draw numbers zero to nine out of a hat for each X and Y axis. The NFC team represents the X-axis and the AFC team represents the Y-axis. Whatever the score is at the end of the game, take the last number of each score and find the corresponding name. For example, if the score were 19-30, you would go to the number nine and go over to the zero. If you really want to do it up right, pick a winner at the end of each quarter.

Next: Might as well eat on top of the memories.

One cool tradition we heard of is to lay out a tablecloth on Thanksgiving day and have it out until the new year. Every time a person comes over, you have them sign their name on the tablecloth. Then, in the new year, you embroider each signature into the tablecloth. This is sure to make a very sentimental family heirloom for years to come. When the cloth is full and can’t be written on anymore, it’s time to pass the tradition onto your oldest child.

Next: A choice made easy for the holiday season.

5. Choose who is buying gifts for who

This alleviates so much pressure on gift buying. | Amalagna/Getty Images

If you come from a large family, it’s very strenuous to figure out what to get everyone for Christmas. So try this; every year after the meal is eaten and the table is cleared, everyone writes their name on a piece of paper. Fill in for the people who couldn’t be there as well. Then throw all the names into the hat and each person draws one name out. You could even have a specific vessel for which this is done. Once you have that name, that’s who you are buying for. This takes the strain off of not only your pocketbook but also the stress of trying to figure out what everyone wants for Christmas.

Next: Might as well get a head start on decorations 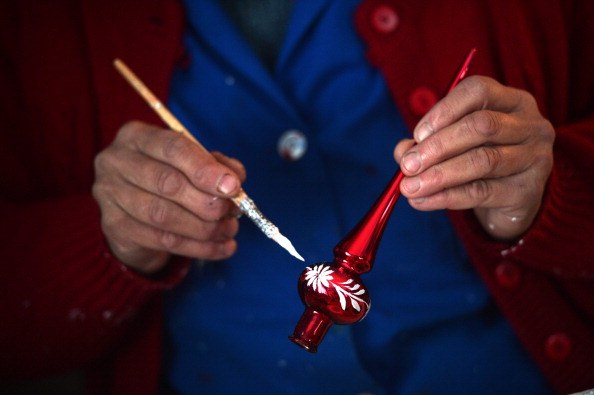 You can get as creative as you like. | Dimitar Dilkoff/AFP/Getty Images

Thanksgiving is also about making memories with your family and friends. For the creative types out there, making ornaments should be a must-do in your Thanksgiving day traditions. Simply gather some supplies at your local hobby shop or have your guests bring something over. This is an almost guaranteed way for the family to have fun together while not worrying about the cooking.

Next: Change up the menu.

3. Try cooking up something else

Try to change it up at least a little bit. | David Sacks/Getty Images

Thanksgiving is about having friends and family get together and enjoy each others company. There’s no rule that says you have to eat turkey and stuffing on Thanksgiving. But if you’re going to stick with tradition, why not try preparing the turkey in a different way, or making the stuffing with a new recipe? The adventure of cooking doesn’t lead down one road.

Next: Throw in one more party.

To be fair, the post-turkey-day sandwich is the best thing on Earth. | Happylark/Getty Images

I know, leftovers are meant for late-night snacks and turkey sandwiches. Sometimes you are just left with too much. So why not throw a post-shopping day leftovers party with all your friends and family? this makes a lot more room in the fridge and gives you another chance to spend time with loved ones.

Next: One last goodwill gesture

The holiday season is full of opportunities to give back to the community and one of the most popular ways is to donate toys to kids for Christmas. Why not get a head start on the toy drive and have your family and friends bring over something to donate to a local youth charity? The best part is that you can make it any kind of drive you want. The food banks always appreciate some help, as well as a bunch of other non-profits focused on those less fortunate.