The Best Royal Wedding Kisses in History, Including Prince Harry and Meghan Markle’s

Is there anything more romantic than a royal wedding kiss? We think not. From kings and queens to princes and princesses, romantic embraces between two royals are the epitome of a fairytale ending.

Up ahead, we take a look at the best royal wedding kisses in history, Including Prince Harry and Meghan Markle’s insanely romantic second kiss that most of us missed (page 10).

While violinists played in the background, Christopher O’Neill and Princess Madeleine of Sweden shared a sweet post-wedding kiss — complete with a fist bump to the sky — at the Royal Palace in Stockholm.

Next: A beautiful balcony kiss

The royal kiss seen around the world. | Steve Heath via YouTube

Following their 1986 nuptials, Prince Andrew and Sarah Ferguson headed up to the Buckingham Palace balcony where they could catch a glimpse of the crowd of well-wishers. It was in that moment that they shared their first kiss as husband and wife.

Next: So. Much. Happiness.

On their wedding day, Prince Carl Philip and Princess Sofia of Sweden shared a number of romantic kisses. Our favorite? The one following their ceremony. Both royals can be seen smiling through their embrace, epitomizing the happiness they felt that day.

Next: When one kiss is simply not enough. 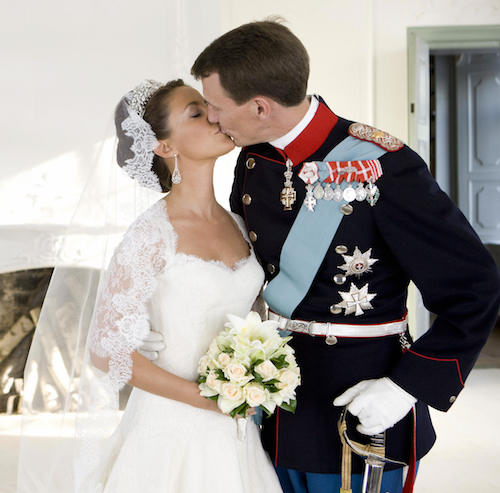 You can sense the happiness they felt. | Steen Brogaard/AFP/Getty Images

Next: These two made the best out of their situation.

Prince Charles and Princess Diana may not have been thrilled about getting married — after all, their marriage was basically arranged by the queen — but that doesn’t take away from the fact that they had one of the best royal wedding kisses in history.

In celebration of their marriage, Prince Felix and Princess Claire of Luxembourg shared a passionate kiss at Basilique Sainte Marie-Madeleine in France.

Next: Did this couple actually makeout?!

They weren’t phased by the crowds. | Pascal Le Segretain/Getty Images

Following their royal wedding, Prince Daniel and Crown Princess Victoria of Sweden gave the public a little more than they had probably expected. The royals kissed passionately — and there might have been some tongue — on the balcony of the Royal Palace in Stockholm.

Next: One of the most affectionate royal kisses in history.

Compared to British royals, Norway’s Crown Prince Haakon and Crown Princess Mette-Marit could not be more opposite in the way they showed affection towards each other on their wedding day. The crown princess’ hand placement says it all!

Next: Prince Harry and Meghan Markle’s second kiss was straight out of a Disney fairytale.

The royal wedding of the year. | Ben Birchall/PA Wire

Can we all agree that Prince Harry and Meghan Markle had the best royal wedding kiss in history? We aren’t talking about their smooch on the stairs of St. George’s Chapel (though, that was so sweet), we’re talking about the kiss they shared in the horse-drawn carriage while parading through the town of Windsor. It was like something straight out of a Disney movie!

Next: The Queen of England’s granddaughter gives us all the feels.

Despite the sun glaring into their eyes, the Queen of England’s granddaughter, Zara Phillips and her husband Mike Tindall shared a sweet and innocent post-wedding kiss at Kirk of the Canongate in Edinburgh, Scotland.

This sweet moment will go down in history. | Ian Waldie/Getty Images

King Felipe VI and Queen Letizia of Spain’s wedding kiss has to be the most romantic kiss on the cheek we’ve ever seen. Not pictured: The endearing forehead kiss the king gave his wife during their wedding reception. Swoon!

Next: Not even a grumpy bridesmaid could stop these two from sharing a kiss of a lifetime.

Who could forget this royal wedding moment? | Christopher Furlong/Getty Images

Like many other members of British royalty, the future king and his wife shared a romantic kiss on the balcony of Buckingham Palace after their nuptials. Albeit traditional, it was wildly romantic and a kiss that will be remembered for a lifetime.

If the kiss isn’t remembered, their grumpy bridesmaid certainly will be.

Next: Even the bridesmaids couldn’t contain their excitement.

14. King Willem-Alexander and Queen Máxima of The Netherlands

This picture proves King Willem-Alexander of The Netherlands could not be any more excited to plant one on his bride, Queen Máxima — even the bridesmaids’ faces were full of bliss. The passionate kiss took place on the balcony of the Royal Palace of Amsterdam.

Next: Another fist bump celebration.

In 2004, Crown Prince Frederik and Princess Mary of Denmark shared a very public wedding day kiss while standing on the balcony at Christian VII’s Palace in Copenhagen. The crown prince even gave a little fist pump in celebration!