The Biggest (and Most Scandalous) Food Recalls in History

Food recalls happen more often than you think. Hundreds occur every year, for reasons most commonly related to food poisoning. Sometimes, allergens make it into food, but aren’t listed on labels. Other times, foreign objects find their way into foods during processing. Regardless of the reason, these recalls usually only happen after people start getting sick. This costs companies millions — and many consumers their lives.

There are over 100 food recalls on average every year

Your grocery store might be recalling products on a regular basis. | Kwangmoozaa/iStock/Getty Images Plus

According to the Food Safety and Inspection Service, there were 122 total food recalls in the U.S. in 2016, though many of them were small. There were slightly more recalls in 2015 — 150 overall. Undeclared allergens were the most common reason certain foods were recalled both years. Poultry (including egg) products were recalled the most. But bacteria and “undeclared substances” have caused multiple disasters over the years.

Here are the 10 biggest food recalls in history.

Next: This outbreak took months to resolve.

These peanuts needed to be recalled ASAP.  | Saul Loeb/AFP/Getty Images

From September 2008 to March 2009, 714 people reported infections with salmonella typhimurium. Officials labeled this as a multi-state outbreak — illnesses were reported in 46 of 50 states. Officials believe King Nut creamy peanut butter, produced from a Peanut Corporation of America facility in Texas, was the source of the outbreak.

Next: Millions of pounds of hamburger were recalled after this incident.

A scary thing to have to worry about. | iStock.com

E. coli outbreaks are one of the most common causes of food recalls in the U.S. Millions of pounds of beef could have sickened residents around the country, though only 19 reported severe illness. Officials recalled approximately 19 million pounds of ground beef to prevent further illness. ConAgra originally issued a smaller recall unrelated to the outbreak, which officials later expanded.

Next: Poor conditions in a packaging plant led to a deadly outbreak near the turn of the century.

Factory conditions were not up to par. | iStock.com

Sara Lee recalled 15 million pounds of meat in 1998 after a roach-infested facility caused a deadly listeria outbreak. The company pled guilty to a misdemeanor charge in 2001, paying a $4.4 million settlement in addition to the facility renovations they made in December 1998. Those renovations, made following the listeria outbreak, eventually caused 15 deaths, costing Sara Lee $25 million.

Eggs are commonly recalled due to salmonella concerns. | iStock.com

Shell eggs processed at two separate facilities in Iowa led to a massive multi-state salmonella outbreak in 2010. Over 3,000 people reported a related illness between May and November of that year. Both Wright County Eggs and Hillandale Farms recalled these products voluntarily, and expanded their initial recalls as the outbreak spread to more states around the country.

Next: This recall led to a top processed meat producer to shut down permanently.

Many people got sick from eating these patties. | Lisovskaya/iStock/Getty Images

A years worth of frozen processed beef patties were recalled in 2007 after an outbreak sickened approximately 30 people. Topps Meats, once the largest processed meat producer in the U.S., no longer operates. The E. coli outbreak affected the company so severely that it went out of business less than a week after the initial recall.

Next: Beef destined for Whoppers made it out of a facility before manufacturers knew it was contaminated.

Don’t worry … your beef is typically safe to consume. | iStock.com

At the time it happened, this recall was the largest in U.S. history. Ground beef, meant for Burger King Whoppers, left a Hudson Foods facility before its test results came back. Some of the beef contained staph bacteria, which can cause serious illness if left untreated. A year later, Burger King stopped purchasing their meat from Hudson.

Next: Thousands of pets suffered, and even died, before this recall.

Something for pet owners to take note of. | iStock.com

In 2007, officials recalled Menu Foods products contaminated with melamine. The recall affected around 150 different brands of cat and dog food. Unfortunately, the recall came far too late to save many infected pets. The FDA estimates this contamination may have led to the deaths of thousands of cats and dogs nationwide.

Next: The bacteria that caused this food recall was resistant to multiple drugs.

Illnesses were traced back to this ground turkey brand. | iStock.com

Drug resistant bacteria can make treating bacterial infections more difficult, which is why many massive recalls occur even when only several samples prove contamination. An antibiotic-resistant strain of Salmonella Heidelberg bacteria affected over 30 million pounds of Cargill ground turkey products in 2011. 134 people reported the illness from 34 of 50 states.

Next: This foodborne illness can be deadly.

You always have to be careful when purchasing poultry. | Photosiber/iStock/Getty Images

Of the estimated 3,000 annual foodborne illness deaths in the U.S., listeria causes about 250 of them, infecting more than 1,500. Pilgrim’s Pride recalled over 27 million pounds of cooked turkey and chicken products in 2002 after a listeria outbreak.

Next: This was the largest meat recall in U.S. history.

Meat products are susceptible to recalls due to animal infections. | iStock.com

The USDA recalled 143 million pounds of Westland/Hallmark beef in 2008 — the largest nationwide meat recall in history. The company did not provide care for or prevent the use of sick cattle meant for their beef products. These animals may have been infected with “mad cow disease,” which the FDA warns can also sicken humans.

Next: This is the most common reason for food recalls each year.

Though it’s common to recall a food due to bacteria, pathogens aren’t the only reason foods get pulled from shelves. A food can also contain undeclared or foreign objects, or undeclared or unlisted ingredients. Foreign objects can include anything from plastic to metal to glass. When a food product contains a potential allergen, like nuts, but doesn’t list it on its label, it can pose a risk to those who will have a negative reaction to that food if they eat it. The FDA requests these recalls to keep consumers safe.

Next: What causes food poisoning? 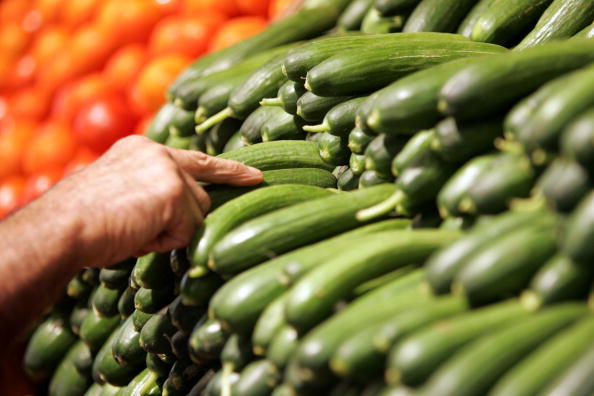 Bacteria can find its way into your meals. | David Silverman/Getty Images

A foodborne illness is just what it sounds like — a sickness you get from eating contaminated food. You can get sick from food contaminated with bacteria, viruses, parasites, or chemicals, says the NIDDK. Most of these illnesses have mild symptoms, don’t last long, and don’t require medical treatment. In rare cases, any of these harmful organisms or substances can lead to hospitalizations, and even death.

Next: These foodborne illnesses could kill you.

The deadliest foodborne illnesses you can get

Your favorite foods could be recalled at any time. | Antonio_Diaz/iStock/Getty Images

The CDC estimates 48 million Americans suffer from foodborne illnesses each year. About 3,000 of those cases end in death. A bacterial, viral, or parasitic infection can be fatal, though the majority of cases aren’t. These are the deadliest foodborne illnesses out there:

The sooner you seek medical attention for severe dehydration and other common symptoms of these potentially fatal infections, the slimmer your chances are of dying.

Next: Have food poisoning? Here’s how to handle it.

Here’s what to do if you get food poisoning

Not sure about a product? Get yourself a refund. | Noel Hendrickson/iStock/Getty Images

You should first notify your local health department if you think something you’ve purchased and consumed from a nearby business has made you sick. Then, focus on taking care of yourself. If your symptoms are relatively mild, make sure to drink plenty of clear liquids and avoid foods high in sugar and fat. Stay away from dairy, caffeine, and alcohol until you’ve recovered.

If you are experiencing symptoms of dehydration, persistent vomiting and/or diarrhea, severe abdominal pain, or you have a fever over 101 degrees, you need to see a doctor for treatment.