The Harvey Weinstein Dilemma: 1 Reason Why Survivors of Sexual Assault Don’t Speak Up

A reckoning began in 2017 when allegations mounted against the powerful Hollywood producer, Harvey Weinstein. Celebrity after celebrity condemned the producer, a case against him was mounted, and finally, some of the women in question have at least a little bit of peace (see page 9).

The scandal has opened the floor for a conversation about sexual assault. Many of the women who’ve come forward regarding Weinstein waited 20 plus years to do so; some survivors of sexual assault spend their whole life harboring the secret. The question arose; why do most of those assaulted wait to report it?

Sexual assault is hidden the majority of the time

Rape is the most under-reported crime; 63% of sexual assaults aren’t reported to police, according to the National Sexual Violence Resource Center‘s statistics about sexual violence.

Other research has found even more staggering results. ABC News’ chief business correspondent Rebecca Jarvis found 2016 data from the U.S. Equal Employment Opportunity Commission that reported sexual harassment allegations are not discussed as much as 94% of the time.

Many sexual assault survivors feel guilty for their perpetrator’s actions. Actress Cara Delevingne, who worked with Weinstein on Tulip Fever, is no different. After avoiding alleged advances from Weinstein, Delevingne was offered a part in the film. “I was so hesitant about speaking out … I didn’t want to hurt his family. I felt guilty, like I’d done something wrong,” Delevingne said.

Sexual violence can have physical, and lasting psychological and emotional effects on survivors. Victims may experience flashbacks, post-traumatic stress disorder, and depression, according to the Rape, Abuse, and Incest National Network.

The statue of limitations is a contributing factor

Alabama is one of a few states with no statute of limitations. | iStock.com/miroslav_1

ABC News chief legal analyst Dan Abrams noted that one reason women remain silent on sexual harassment is that their alleged harasser has an easy out from charges; the statue of limitations doesn’t hold them accountable.

Strength in numbers: They’re often afraid they won’t be believed

“This is Harvey Weinstein,” Katherine Kendall, who appeared in Swingers among other roles, recounted her thoughts to the The New York Times, “I’ll never work again and no one is going to care or believe me,” she also said in a recent interview. Weinstein allegedly undressed and chased her around a living room.

Survivors don’t only fear their credibility — Ronan Farrow of the New Yorker wrote that almost all of the people he spoke with told him they were afraid of retaliation. “If Harvey were to discover my identity, I’m worried that he could ruin my life,” a former employee of Weinstein’s told Farrow.

The major reason many survivors remain silent: It affects other areas of their life

Many women in all different types of jobs don’t say anything if they’re sexually assaulted. | iStock.com/Image Source

Dr. Janet Taylor, a New York City psychiatrist, said women may not feel comfortable confiding in their human resources department since their harassers are often in a position of power. Women feel they may lose their jobs if they speak out. This often leads observers to blame women for remaining silent.

“It is disheartening to see so many comments already blaming women for not ‘speaking up,'” a New York Times reader said in a comment that’s been circulating the internet, “Please count yourself lucky that you’ve never had your career on the line based on whether or not you sleep with your boss … this happens to women making minimum wage in retail as well as women who fought through it to become CEOs.”

In the case of the Harvey Weinstein allegations, it affects actress’ jobs

Lena Dunham has spoken about the Harvey Weinstein case, too. | Jason Merritt/Getty Images

Thirty-two women so far have come forward with allegations against Weinstein for instances of sexual assault. For some, he would invite them to a private place to discuss films or work opportunities and follow these conversations by offering massages, touching them inappropriately, or outright offering work deals reliant on sexual favors. Many actresses reported that they feared speaking out would jeopardize their careers.

“Abuse, threats and coercion have been the norm for so many women trying to do business or make art. Mr. Weinstein may be the most powerful man in Hollywood to be revealed as a predator, but he’s certainly not the only one who has been allowed to run wild,” Lena Dunham wrote for the NY Times, “His behavior … is a microcosm of what has been happening in Hollywood since always and of what workplace harassment looks like for women everywhere.”

Weinstein, 65, was investigated by the New York Police Department in 2015. The Manhattan District Attorney’s Office chose not to file charges after a two-week investigation. Weinstein was never prosecuted. A NYT investigation found allegations against Mr. Weinstein which spanned almost 30 years. These allegations were documented in interviews, legal records, emails, and documents from Weinstein’s businesses Miramax and the Weinstein Company.

Over the course of nearly three decades, Weinstein reached at least eight known settlements with women, according to two anonymous company officials.

Many actors and actresses, including Gwyneth Paltrow, are speaking out. | Timothy A. Clary/Getty Images

Celebrities and activists are increasingly vocal on Twitter and in the news in reprimanding any and all sexual assault. Many are using conversations of Weinstein’s misconduct as a platform to denounce workplace harassment in Hollywood and beyond. “We’re at a point in time when women need to send a clear message that this is over,” Gwyneth Paltrow said, “This way of treating women ends now.”

Rarely are perpetrators brought to justice 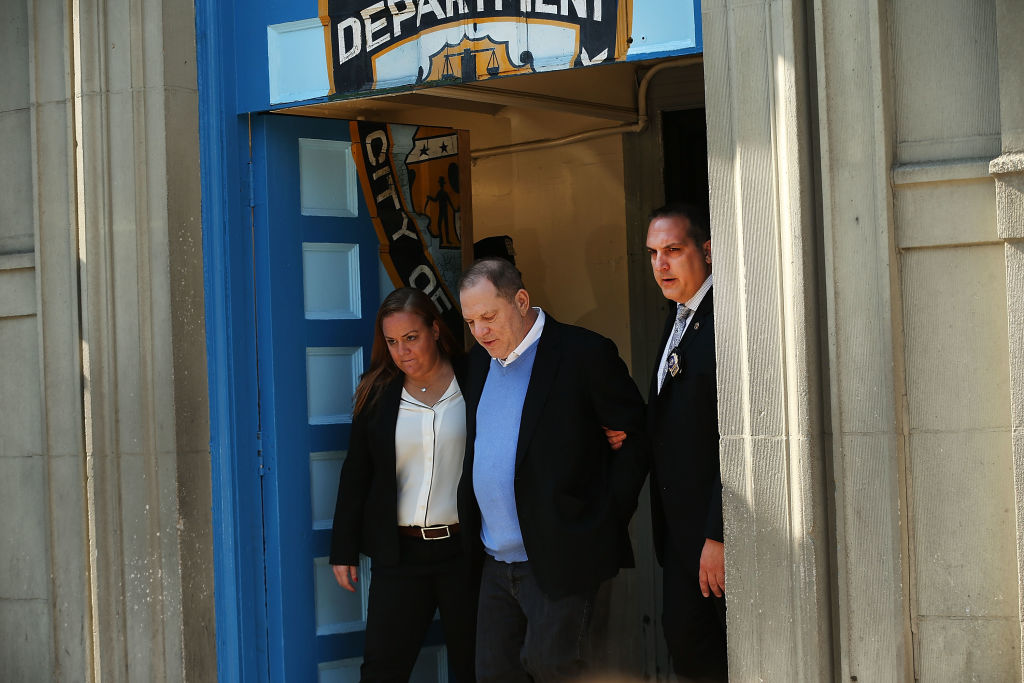 Harvey Weinstein is led out of the NYPD’s First Precinct in handcuffs after being arrested and processed on charges of rape, committing a criminal sex act, sexual abuse and sexual misconduct on May 25, 2018. | Spencer Platt/Getty Images

Several long months after the articles about his misconduct resulted in his firing, legal headway was made. On May 25, 2018, Weinstein was arrested in New York City, turning himself in and posting his $1 million bail on “charges that he raped one woman and forced another to perform oral sex,” according to the New York Times. Though there is still a lot to come in this case, it’s a step in the right direction — for the crimes of sexual misconduct and for survivors everywhere.