The Most Controversial Sports Magazine Covers We’ve Ever Seen

From Vogue to Vanity Fair, we’ve seen some pretty racy magazine covers over the years that have caused a major stir. Usually, it’s the fashion magazines that cause all the ruckus (aside from Sports Illustrated’s Swimsuit issues, that is). But plenty of other magazines have committed egregious faux pas when referencing sports content, too.

Here are the sports magazines covers that have upset the public the most over the years (including, of course, the most infamous SI Swimsuit cover on page 9).

1. The ‘unity’ cover that everyone questioned 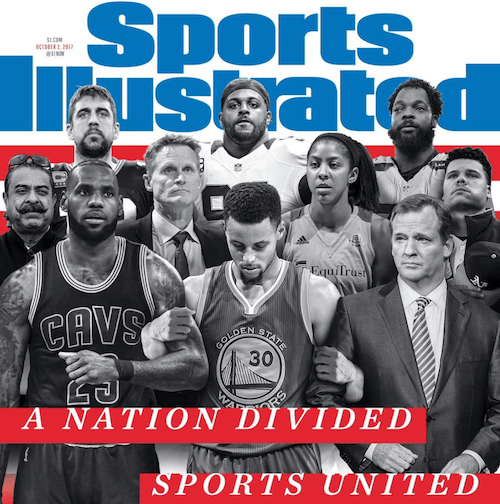 This magazine cover attracted a lot of controversy. | Sports Illustrated

With all the social and political issues going on in America, it felt natural for Sports Illustrated to get in on the action. We remember when Trump attacked NFL players for protesting the national anthem, in particular. But the New York Post reports this cover caused national outrage.

For one, Colin Kaepernick, the first sports player to take a knee during the anthem, was not featured on the cover. Instead, it included NFL commissioner Roger Goodell, who seems to side-step real issues in favor of neutral, brand-friendly responses.

Next: This might be one of the greatest (and most shocking) covers of all time.

2. Muhammed Ali as a martyr on Esquire 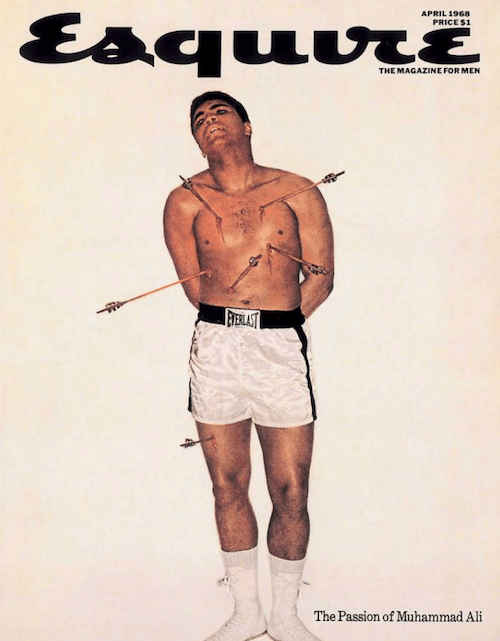 This cover shocked many people. | Esquire

It was 1968 when Muhammed Ali was on the cover of Esquire, and the image sparked talk around the country. Rolling Stone reports Ali was mimicking a famous painting by 15th-century artist Francesco Botticini. The painting was of Saint Sebastian who had multiple arrows piercing his body.

Today, it’s known as one of the greatest covers of all time. The image outraged many Christians at the time due to the martyr aspect, however.

Next: Who knew Golf Digest could be so revealing?

Some readers did not find this cover empowering. | UPROXX Sports via Twitter

At just 20 years old, everyone was paying attention to pro-golfer Lexi Thompson. And Golf Digest made it apparent that it wasn’t just her skills on the course that we should be looking at. Today explains the magazine chose to show an image of a shirtless Thompson with just a white cloth draped over her chest in their May 2015 issue.

Thompson tweeted her support for the shoot, but not everyone was pleased. It seems many took issue with the over-sexualization.

Next: Many considered this cover to be extremely racist.

This cover received the wrong kind of attention. | CecilleAoest via Twitter

Gisele Bündchen and LeBron James seemed like the perfect sports duo to grace the cover of Vogue. The Telegraph notes the image they used, however, sparked outrage due to its racist undertones. The image shows Bündchen in the arms of a very angry-looking James. Critics said the photo was reminiscent of King Kong in that James appeared “ape-like,” which obviously holds racist undertones.

Next: Dennis Rodman is truly in his element in this photo.

5. Dennis Rodman being his most authentic self for Sports Illustrated This magazine pushed Rodman’s image over the edge. | Rose Nation via Twitter

You may know Dennis Rodman for his friend status with Kim Jong Un these days, but let’s not forget he’s also a legendary sports figure. And he proved he can be a stellar NBA player and still show his wild side with this controversial SI cover, Business Insider notes. Here, he’s holding a parrot while reclining in a chair. And he’s also sporting his signature style.

Many people applauded the cover for showing Rodman in his element. Others were shocked to see that this was what the sports star was really like.

Next: This powerful women’s movement didn’t fly with everyone.

6. The ‘Me Too’ movement’s debut on Sports Illustrated

Many look forward to SI’s infamous Swimsuit issue, but there was one issue that caused widespread criticism and confusion. Instead of putting the models in bikinis, they instead were nude and covered in empowering captions, NBC News explains. Within the issue were a range of models who participated in the shoot as a way to bring awareness to sexual assault.

Some thought the shoot was more exploitative than anything else, however — especially considering what sort of content the Swimsuit issue has offered in the past.

Next: We all questioned whether this suggestive pose was necessary. 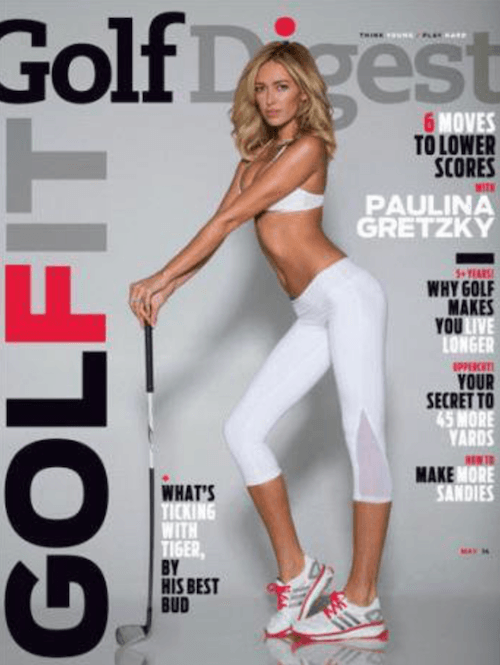 Golf has never been this sexy of a sport. | Indie88 via Twitter

This golf superstar has been on many magazine covers — but none caused as much of a ruckus as her Golf Digest debut, The Huffington Post notes. On the cover, Paulina Gretzky (Wayne Gretzky’s daughter) poses provocatively with her golf clubs. And the pros weren’t having any of it.

Golfer Stacy Lewis explained, “It’s frustrating for female golfers. We don’t get respect for being the golfers that we are.” Juli Inkster, who has also appeared on the cover, continued the conversation by saying she guarantees “it was not a woman editor who chose that cover.”

Next: One pop star had a lot to say about this sports shoot. Nicki Minaj called out the magazine for editing her figure. | Nikki Minaj via Instagram

She followed up her first comment with, “I love my personal unretouched photos where my forehead doesn’t mysteriously grow in length.” Now that we look closer, we totally see what she’s talking about.

9. The Hannah Jeter swimsuit cover that got everyone talking

Hannah Jeter’s Swimsuit issue debut was definitely memorable, for better or for worse. Business Insider explains the 24-year-old was featured on what’s now known as the most scandalous cover ever, thanks to her barely-there bikini bottoms. Sports Illustrated readers have called it “pornographic,” “inappropriate,” and “too risque,” to say the least.

The outrage got so severe that the National Center on Sexual Exploitation requested retailers remove the magazine from public displays.

Next: Another Sports Illustrated snafu — this time, with racism 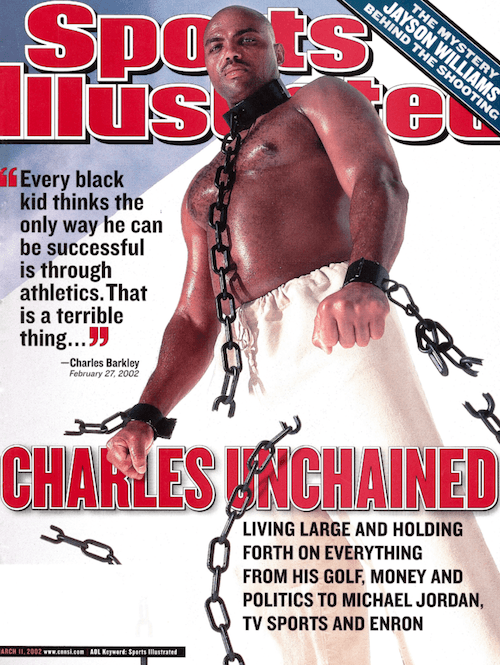 Sports Illustrated strikes again — but it’s not the swimsuits that did it this time. Business Insider explains Charles Barkley’s 2002 cover depicted him in chains for a story about racism. While it was well-intentioned, it received a lot of criticism.

When Campus Insiders asked him about any regrets he has regarding the cover, Barkley says he doesn’t have any. “I don’t think what I said is that controversial,” Barkley said. “I think it has something to do with my blackness.”

Next: You’ve probably never seen this horrifying cover before.

11. The racist magazine cover Esquire will never live down 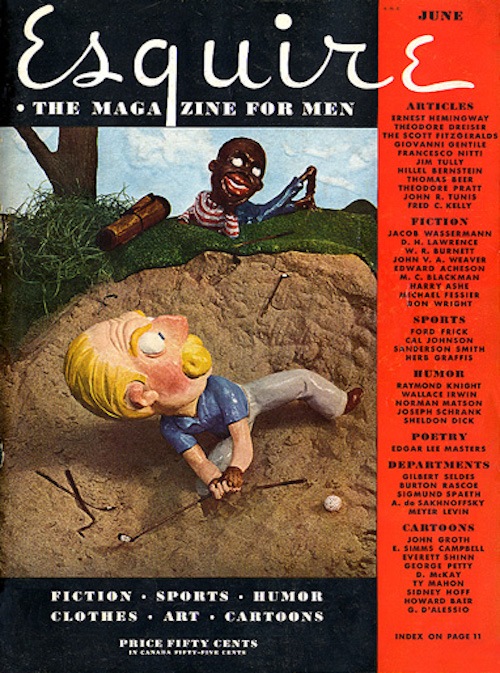 One of the most controversial covers in magazine history. | Esquire

This magazine cover would never fly today, so we’re not surprised Esquire first published it in 1934. Still, it’s incredibly problematic, Atlanta Black Star explains. On the cover, then-mascot, Esky, is seen in a sand trap trying to get his golf ball out. Above him on a hill is a black man lying in the grass.

This doesn’t seem too bad — until you notice the characters’ outfits. Esky is dressed nicely, while the black man on the hill has just a T-shirt, high-water pants, and no shoes.

Next: This was totally inappropriate.

12. The Golfweek cover featuring a noose

The editor-in-chief was fired over this controversial cover. | Golf Weekly

Golf magazines have a history of being a lot less family-friendly than we thought. Atlanta Black Star explains Golfweek published a magazine cover with a noose on the front. And the worst part is that this magazine cover came out in 2008, which was right around the time when Tiger Woods was being attacked with racist language on the air.

Unsurprisingly, this cover caused the magazine’s editor to get fired immediately.

Next: Looking back, this cover is tough to digest.

From DUIs to extramarital affairs, we’re all familiar with the rise and fall of Tiger Woods. Before the cat was totally out of the bag, however, Vanity Fair featured Woods on the cover in 2006. The Telegraph reports he appears shirtless while lifting weights, which certainly went against his clean image from years prior.

The photo wasn’t a big deal at the time, but now, readers find it uncomfortable. And some even believe he was taking performance-enhancing drugs around the time of the shoot.

Next: These sports stars go totally nude for this issue of ESPN.

14. Many sports stars garner attention for the ESPN Body Issue

Some readers love the ESPN body issue covers. Others, not so much. | Landinosmah via Twitter

The annual ESPN Body Issue features nude athletes performing their sport in the nude. And plenty of well-known faces have graced the cover.

Many readers think the Body Issue pushes the boundaries a little too much, however. And others see a double standard happening, as the backsides of male athletes are more likely to be featured than ones of females. There was particular backlash over a nearly-nude photo of Conor McGregor that ran on the main page of ESPN’s website, the company notes.

Next: We never expected this famous female to get her cover debut.

Readers expect quite a lot from the SI Swimsuit issue — but none of it includes Barbie. For the SI 50th anniversary Swimsuit cover, they teamed up with Mattel to feature one of the most iconic women in America. The theme for the issue was also labeled “unapologetic.”

The New York Times notes the campaign sparked a lot of outrage, however. Some people labeled it creepy, while others didn’t see the value in posting a photo of Barbie’s humanely-impossible body on the cover.