The Most Disgusting Fake Meat Products You Could Ever Buy

There are major benefits to a vegetarian diet if you follow it properly. Eating a plant-based diet composed of fresh produce, grains, beans, and legumes is a proven way to lose weight and lower your risk of heart disease.

Vegetarianism’s rise in popularity sparked a growth in meat substitute products like veggie burgers and “facon” (fake bacon). Herbivores rejoiced; a way to still join in the barbecue fun without compromising their diet!

While these meat substitutes boast alternative protein sources and nutrients, they aren’t all good for you. Some of the ingredients in these fake meat products are downright disgusting. The taste is nothing to savor, either; we suggest avoiding these common grocery store meat substitutes.

Veggie sausages have not passed the taste test. | iStock.com

The Field Roast Grain Apple Maple Breakfast Sausage boasts a simply made, plant based product, but the ingredients list is a bit concerning. It’s main ingredients are filtered water and vital wheat gluten, a low-quality protein source that lacks the amino acid lysine.

The reviewers of a vegan taste test weren’t impressed with the flavor; among the complaints were, “Was disgusting … I’m sorry I spit it out,” and, “Rubbery.” 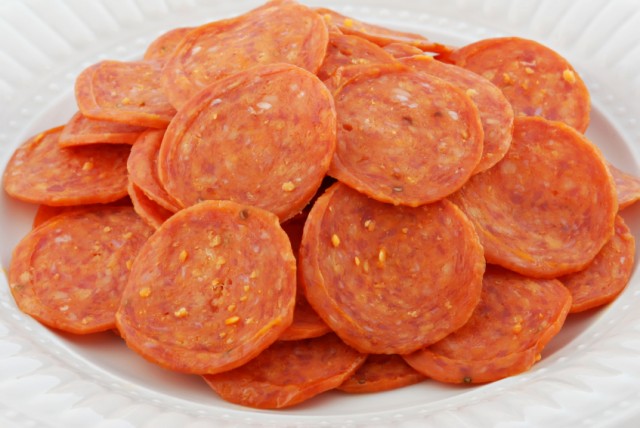 The bad reviews speak for themselves. | iStock.com

You may just want to stick to plain cheese pizza; Yves Veggie Cuisine Veggie Pepperoni received less-than-stellar reviews, “This is rubber that’s been melted down and disguised as food. I never want to eat this again. Dogs wouldn’t eat this,” among them.

The ingredient list leaves something to be desired as well. The major ingredients include soy protein and tofu, followed by a heavy list of chemicals and coloring. Soy is a controversial food, and studies on it aren’t conclusive. An Environmental Health Perspectives study notes that “second generation” soy products like meat substitutes involve chemical extractions and other processing, which may compromise the amount of viable protein in the food.

Convenient and meat-less, but not very tasty. | iStock.com

Meatless burgers are low in fat, but they tend to pack tons of salt. The Beyond Meat Beast Burger patty, for example, contains 480 mg of sodium compared to the 61 mg of sodium in an average 3 oz beef patty.

It failed a frozen veggie burger taste test as well. Reviewers claimed it tasted, “like cafeteria meat,” and that they, “could not make it beyond the first bite.”

One serving of Boca Original Meatless Chik’n Nuggets racks up nearly 500 mg of sodium; that’s one third of the American Heart Associations daily recommendation for your heart health. Meatless nuggets are usually composed of soy protein concentrate and isolate.

“Some products have sauces or come pre-marinated, which makes it convenient and easy, but they will be really high in sodium and MSG,” Marjorie Nolan, RD, CPT, a spokesperson for the Academy of Nutrition and Dietetics told Rodale Wellness.

Tofu deli meats like Lightlife smart deli turkey receive varying reviews. Some simply weren’t fans, while others called it, “pretty nasty.” Regardless of the taste, the tofu is the real problem ingredient.

We’ve been convinced that tofu is a low-fat alternative protein source, but when it takes the form of pepperoni, bologna, or roast turkey, it’s not healthier than the meat version. Many mock meats are the tofu equivalent to processed deli meats, which are typically very high in sodium, according to Rodale Wellness. “Tofu products come from a bean and don’t contain antibiotics, added hormones, and animal products, but they’re still processed foods,” said Nolan.

If you can’t eat bacon, you’re better off looking for another side dish. | HandmadePictures/iStock/Getty Images

Facon, the unofficial term for fake bacon, simply can’t live up to the real deal. Tempeh Smokey Maple Meatless Bacon, for example, may not be worth its expensive price tag ($30 per package) and lacking flavor.

“This flavour is just too much. It’s just too chemical-tasting. I like the other flavours of this tempeh brand, but I have to pass on this one,” a customer told HuffPost.

Zoe Williams, scarred by her childhood days of bad Quorn products, decided to give meat substitutes another shot and tested a few. What she found out about Taifun Tofu Wieners repulsed her.

“Tofu wieners were repellent long before the point of eating,” she said. “They wobbled like the intestines of the dead; cooked, they fell apart as you touched them, making it impossible to catch them on a fork.” The tofu dogs pack 20 g of fat per serving, nearly double the amount of most all beef hot dogs.