The Most Insane Prenups Between Hollywood’s Richest Celebrity Couples

The life of a celebrity isn’t always easy — but we all would love to have millions of dollars at our disposal. And when it comes to marriages amongst the Hollywood elite, dealing with all that money gets even trickier. Many engaged couples arrange a prenuptial agreement, or a contract outlining their finances if they so happen to divorce later on. And for celebrities with millions of dollars to burn, these prenups can be pretty outrageous.

Here are the incredible prenups we can’t even fathom writing up ourselves.

Kidman is not missing any details in her prenup with Urban. | Frederick M. Brown/Getty Images

Nicole Kidman learned from her tumultuous relationship with Tom Cruise early on. So by the time Keith Urban came around, she knew a prenup had to be in order. PopSugar explains their agreement says Urban gets $600,000 a year for every year the couple’s together — a small fraction of her $150 million worth. There’s also a clause that says she doesn’t have to give Urban any money if he uses illegal narcotics or drinks an excessive amount.

As for the kids, the prenup also states they’d have joint custody in the event of a divorce, and Urban can’t take them out of whichever country Kidman is living in at the time.

We were all surprised when this infamous couple decided to call it quits — but what interested us even more was their prenup. The Huffington Post explains Jolie and Pitt had 12 properties together, but dividing up their assets wasn’t the issue. It was a fight for custody of their six children that caused a major rift between the two.

Jolie requested physical custody of the kids, while Pitt wanted joint legal custody. In addition to that, Pitt decided to fight for physical joint custody of the children as well. Alleged child abuse allegations complicated the matter even further.

Next: This is the most disgusting clause we’ve ever heard. 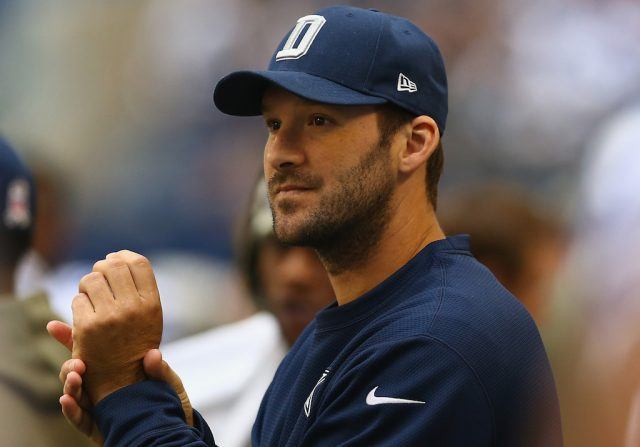 Romo had an insane request in his prenup with Simpson. | Ronald Martinez/Getty Images

The prenup between these two was less about the money and more about Jessica Simpson’s body. As Corri Fetman, aka the “Lawyer of Love,” tells ChicagoNow, the Dallas Cowboys quarterback wanted to add in a lifestyle agreement into their prenup. The clause stated Jessica Simpson could not be over 135 pounds during their marriage. And for every pound she gained over 135, she would owe Romo $500,000 of her property.

Luckily for Simpson, she never married Romo, and thus this ridiculous clause never came to fruition.

Next: This Two and a Half Men star has a very lengthy prenup with one of his ex-wives.

Charlie’s been around the block a few times. | Kevin Winter/Getty Images

Charlie Sheen’s no stranger to marriage — and according to Gawker, he really felt like his marriage with actress Brook Mueller was going to last a lifetime. The couple divorced in 2011, however, and they had a pretty lengthy prenup. Just for marrying Sheen, Mueller received $500,000 within 180 days of the wedding ceremony. She also received an anniversary payment of $300,000 for the first 10 years of the marriage — and if Sheen failed to pay, interest would accrue.

As for the divorce, the prenup said Mueller would get a $100,000 relocation fee and whichever car of his that she drives. In total, she probably walked away with over $3.5 million in assets.

Next: This celebrity was basically paid to be a mother.

We didn’t know it was possible to earn money having children. But for Beyoncé, it’s a reality. As StyleBlazer says, Jay Z owes his wife $5 million for every child they have together, and $1 million annually for every year they’re married for up to 15 years. If the marriage ended before two years, the prenup also stated Jay Z would owe $10 million to B. Thankfully, the couple’s still going strong.

Next: This ultra-famous couple have a specific lifestyle agreement in their prenup.

You can cheat, but it will cost you. | Frazer Harrison/Getty Images

Tony Romo and Jessica Simpson weren’t the only couple considering a lifestyle agreement in their prenup. In fact, it’s becoming quite common for celeb couples to have prenups involving more than just their money, assets, and children. NY Daily News says Jessica Biel created a clause for Justin Timberlake stating she would get $500,000 if he was caught cheating. Considering the singer is worth $230 million, that’s a small price to pay — but still, it sounds like a lot to the rest of us.

Next: The Facebook creator and his wife have an odd agreement.

Time well-spent is important for this couple. | Adam Berry/Getty Images

We can’t imagine what life is like after marrying one of the wealthiest men in the country, but we imagine it involves a pretty detailed prenup. The Huffington Post reports Chan isn’t necessarily entitled to half of his billion-dollar company due to California law — but if Facebook increased in value after they wed, she is entitled to half of those new profits.

Facebook aside, Chan also outlined a relationship agreement of her own with Zuckerberg before they wed. It says they need to have one date per week and at least 100 minutes of alone time out of the apartment and away from his company. So, did this agreement make it into the prenup? We’re not sure — but we wouldn’t be surprised.

Next: He’s sung about prenups before — so what does his outline?

Kanye will be footing the bill for a long time. | Dimitrios Kambouris/Getty Images

Kanye West said it best with his lyrics in “Gold Digger” when he sings, “We want prenup.” Luckily for West and his wife, Kim Kardashian, their prenup was easily settled, sources tell Radar Online. In fact, Kanye seemed ready to forgo a prenup altogether and offer Kim everything he had — but luckily, he stuck with his own advice in the end.

Their prenup says for every year they’re married, Kardashian gets $1 million for up to 10 years, and she gets to keep all the jewelry and gifts given to her by her husband. Additionally, their mansion is in Kim’s name, even though it’s West who’s footing the bill. And all the money she earns from her TV show and fashion lines are solely her property.

Next: She’s been married more times than we can count, and her final husband took advantage.

Elizabeth Taylor has been through a couple of divorces. | Wade Byars/AFP/Getty Images

Elizabeth Taylor is no stranger to weddings, as she was married eight times in total. And it was her final marriage to construction worker Larry Fortensky that made us question his true intentions. As TIME says, Fortensky was 20 years younger than Taylor, and their stints in rehab brought them together. Before their marriage, they signed a prenup saying Fortensky would receive $1 million if the marriage lasted five years. Lo and behold, they ended their relationship right around the five year mark so he could walk away with his big payout.

Next: This famous director wrote his prenup on a napkin, which wasn’t the smartest idea.

His ex-wife made off with half his net worth in the late 80s. | Kevin Winter/Getty Images

Known for her role in Carrie, this aspiring actress married famed director Steven Spielberg in 1985. Spielberg ended up leaving her for another actress just four years later, and that’s when the trouble began for him. Though the couple had a prenup, Irving had it thrown out in court. The Weinberger Divorce & Family Law Group explains their prenup was written on the back of a cocktail napkin, so it wasn’t difficult to disprove. In the end, Irving was awarded $100 million — half of his net wealth back in the mid ’80s.

Next: This famous Scientologist didn’t owe much to his ex-wife through their prenup.

We were expecting Katie Holmes to get more from Tom Cruise following their divorce, but as TMZ reports, their prenup didn’t leave her with much. She didn’t get a lump sum payout, sources say — which means she didn’t receive any part of Cruise’s $250 million. With that said, Holmes likes to earn her own cash, and she’s much more concerned for her daughter’s wellbeing than the money. For this reason, she’s getting $400,000 a month from Cruise yearly for child support until Suri turns 18.

Next: This couple had a “cheating clause” in their prenup. 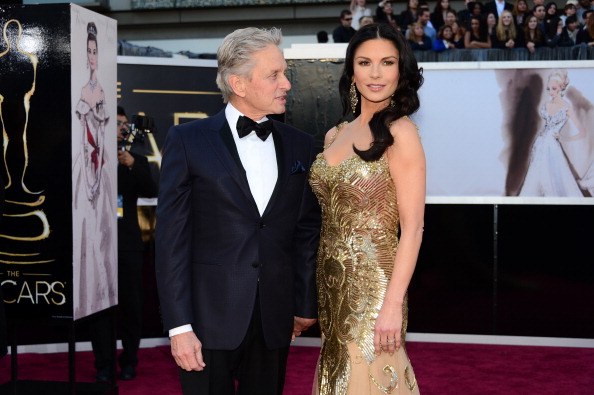 Here’s another couple with a “lifestyle agreement” in their prenup — but it’s different than the rest. To keep her husband from straying to other women during their marriage, Zeta-Jones added an agreement saying Douglas owes her money if he cheats. Not only that, but Zeta-Jones also receives $2.8 million for every year she’s married to her husband. Doesn’t sound like such a bad deal for her to us.

Next: This famous golfer paid major money to keep his marriage together. 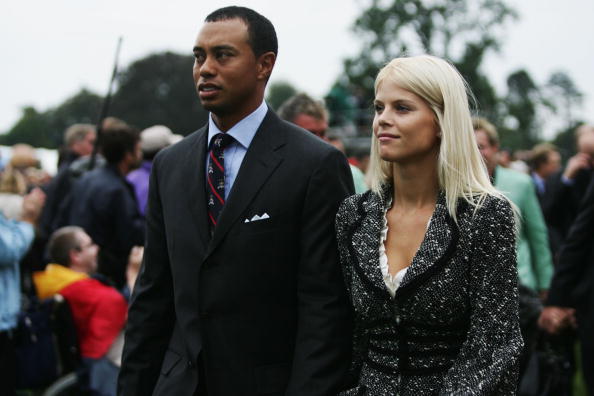 Elin Nordegren made out like a bandit after Tiger’s cheating allegations came to light. | Harry How/Getty Images)

We all remember Tiger Woods’ scandalous allegations a few years back — and it ultimately led to the demise of his marriage with Swedish model Elin Nordegren. According to The Daily Beast, Nordegren was offered a $5 million payout if she agreed to stay with Woods following his cheating allegations. At the same time, her prenup was revised to give her an extra $55 million if she stayed with him for two more years.

Before the scandal, Nordegren had already signed an agreement stating she would receive $20 million after 10 years. After the news of Tiger Woods’ cheating, however, she came away with a whole lot more.

Next: This famous Kardashian was happy to have created a prenup with her ex-husband.

A drug addiction led to this relationships demise. | Michael Buckner/Getty Images For AXE

Khloe Kardashian begged her husband, Lamar Odom, to enter rehab for his drug addiction — and when he didn’t, she filed for divorce. Radar Online reports the Kardashian starlet made an agreement to protect her money and assets before they wed, even though Odom was worth up to $100 million himself. In the wake of the divorce, Kardashian kept their $4 million home, her $1 million engagement ring, and all the gifts Odom gave her over the years. She was also entitled to $500,000 for each year of their marriage and remained as the beneficiary of his $10 million life insurance policy.

Next: This couple chose to skip the prenup — and one got a serious payout. 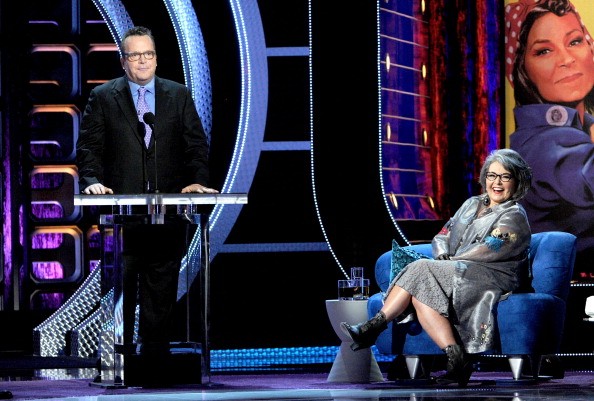 A prenup is always a good idea. | Kevin Winter/Getty Images

Let this be a lesson for all celebrities as to why a prenup is always a good idea. The Frisky explains back in 1990, Roseanne Barr and Tom Arnold were crazy about each other — so crazy, in fact, that Barr fired her attorney when a prenup was suggested to her. She probably wished she took that advice, however. Four years after their marriage, Arnold and Barr divorced, and he walked away with $50 million of her money.