Known as one of the most scandalous royals, Sarah Ferguson has been making headlines since she was married to Prince Andrew in ’86. She was first viewed as a breath of fresh air, as she was more wild and free than the other more traditional royal women. But after several horrifying paparazzi photos and money woes, most members of the family decided not to associate with her.

We were all waiting to see if Prince Harry and Meghan Markle would invite her to their wedding, however. It turns out they did. Here’s the surprising reason why Ferguson attended (page 6) and also why Kate Middleton and Prince William weren’t too keen on the idea of her attending their wedding (page 7).

1. Ferguson arrived at the wedding in a seriously head-turning look

It’s not every day you get dressed up for a royal wedding, and Ferguson certainly took this to heart. Everyone knew she arrived on the scene once they caught a glimpse of her low-cut, form-fitting navy dress with pink piping, Daily Express notes. Emma Louise Design, a Windsor-based designer known for her wedding looks, created the dress.

In true royal fashion, Ferguson also arrived on the scene wearing a navy and black mesh headpiece. She looked as photo-ready as any other guest.

Next: Here’s why you’ve been seeing more of Ferguson recently.

2. She’s been back in the spotlight thanks to her daughter’s upcoming marriage

Ferguson has had to rise above scandals. | Tim P. Whitby/Getty Images

There’s a reason Ferguson has been in the press lately, and that’s because her daughter, Princess Eugenie, is getting married.

The Observer explains Princess Eugenie is the youngest daughter of Ferguson and Prince Andrew. She’s wedding her long-time boyfriend Jack Brooksbank at the same venue Meghan and Harry used. Oddly enough, Eugenie and Brooksbank had to postpone their wedding just to make sure Meghan and Harry could be in attendance. It seems the families are closer than we thought.

Next: This exchange between Princess Beatrice and Prince Andrew had us wondering.

3. Ferguson’s other daughter, Beatrice, appeared concerned for her during the ceremony 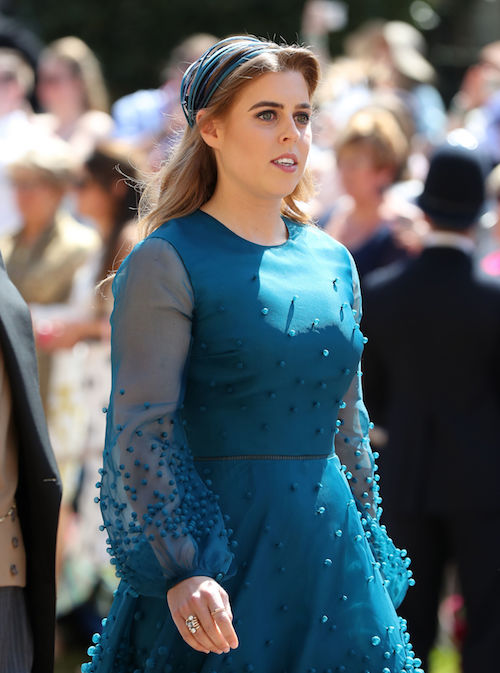 Princess Beatrice seems to stand by her mom’s side quite often. | Gareth Fuller – WPA Pool/Getty Images

Ferguson enthusiastically waved to the crowd as she entered the royal wedding venue. And many noted she didn’t have ex-husband Prince Andrew or either of her daughters by her side. Then, during the ceremony, Hello! reports Princess Beatrice leaned over to her father and asked where her mom was.

It seems Ferguson was seated all the way on the other side of the aisle, and even her daughters didn’t know where she’d be. We’re unsure as to why the seating arrangements were this way — but it seems even her family was in the dark.

Next: This was one of the most scandalous moments Ferguson ever had.

4. Unfortunately for Ferguson, she’ll never live this scandal down

A good PR team might be needed. | Jonathan Leibson/Stringer

Ferguson can’t do much of anything without being reminded of this scandal. Daily Express explains in 1992, she was caught with her financial advisor in a very compromising position while vacationing in the south of France. Photographers caught the advisor sucking her toes, and of course, the photos were plastered across multiple tabloids.

That same year, Ferguson and Andrew announced their separation. And it was just the start of her fall from grace with the royal family.

Next: This is the second scandal the royals did not approve of.

5. She was shunned by most of the royal family after she tried to sell access to Prince Andrew

As if the toe sucking incident wasn’t bad enough, Ferguson attempted to sell access to Prince Andrew to an undercover reporter. The Guardian explains the reporter posed as a foreign businessman and feigned interest in accessing information about Andrew. Ferguson then told the man that if he paid her over $600,000, it would “open up any door” he wanted.

Ferguson claimed Andrew knew about the meeting, and then also mentioned she felt “devastated by the situation.” No matter what her excuse was, this mishap didn’t go over well with the royals.

Next: The real reason why Ferguson got an invite to the glorious event

She may not have been invited to the private evening party post-wedding, but Ferguson was one of the 600 guests invited to the main event, news.com.au reports. It turns out it may have been Harry’s suggestion to have Ferguson in attendance. Victoria Howard, a royal historian, said he likely invited her because she was friends with his mother, Princess Diana.

“Harry grew up with her as an aunt so it makes sense for her to be there,” Howard commented.

Next: Here’s why Prince William and Kate Middleton didn’t invite her.

7. Prince William and Kate Middleton had other ideas for their wedding

Prince William might not be very fond of that side of the family. | Warren Allott – WPA Pool/Getty Images

Daily Mail Online notes Ferguson felt quite upset when she didn’t receive an invite to William and Kate’s wedding. She reportedly felt “totally worthless,” since she assumed she’d get to see her nephew’s marriage. It seems her past scandals and bad blood with a few of the royals were too much for William and Kate to handle at the time.

The story’s different with Harry, however. E! News explains he’s much closer to her daughters and her than William ever was.

Next: We’re slated to see a lot more of Ferguson in the future.

8. Is Ferguson making a comeback? It seems she sure is trying

A perfect time to come into the spotlight. | Dimitrios Kambouris/Getty Images for Gabrielle’s Angel Foundation

She’s best known for her scandals, but somehow, Ferguson always makes her way back into royal family events. And now that Eugenie’s wedding is the next big royal event to occur, we’re wondering who she’ll be mingling with next. W Magazine also notes British tabloids are providing Ferguson with a shocking amount of positive coverage given her background.

Could this be the comeback she needs? It just might be.