The Secrets Behind Kim Jong Un’s Relationship With His Best Friend, Revealed

With someone as tyrannical as Kim Jong Un, it’s tough to believe he has anyone on his side. The North Korean regime, however, has proven itself to be tight-knit. They’re such an impenetrable force, in fact, that it’s a wonder how any of them have relationships with others outside of the family. And we certainly can’t imagine them making friends with an American.

So, does Kim Jong Un have a best friend? He certainly does — and it’s with someone none of us ever expected. We have the details here.

It all started with a basketball game in North Korea

We are pretty sure no one saw this friendship coming. | Wang Zhao/ AFP/Getty Images.

Of all the unlikely friendships, no one ever expected former NBA player, Dennis Rodman, to befriend the North Korean dictator. CNN reports it was back in 2013 when Rodman met Kim Jong Un for the first time. He travelled there with the Harlem Globetrotters for an exhibition game. Since that fateful meeting, he’s called Kim a “very good guy” and considers him a close friend.

Rodman has been to North Korea numerous times to hang out with Kim Jong Un since their first encounter — and he even sang ‘Happy Birthday’ to the dictator in 2014.

Dennis Rodman was the ‘bad boy’ of the NBA

Dennis Rodman is easily one of the best rebounders in NBA history. | Jeff Haynes/AFP/Getty Images

Rodman’s legacy goes back far before he was a friend of the Kims. The Daily Express reports he had a reputation in the NBA for not getting along with players and officials during games in the ’90s. And he’s also well known for his wild hair colors and many piercings and tattoos.

The Sun says he’s currently in the NBA Hall of Fame as well, but that’s not all he’s done. Rodman has written several autobiographies and has dabbled in both wrestling and acting. His ultimate goal for North Korea was to bring more sports over, but now it seems it’s up to him to smooth over tensions.

Rodman and Kim Jong Un enjoy all kinds of activities together

Rodman has been to North Korea a total of five times since the two met — and they don’t just sit around and talk politics. The Sun reports Rodman says him and Kim “do a lot of cool things together like skiing and riding horses.” They even sing karaoke together, with Rodman stating Kim is “more like a kid than anything.”

As for whether or not he’s treading in dangerous territory with their friendship, Rodman says, “It’s funny though that I don’t see how people can sit there and say that this person is a ‘madman’. He probably is, but I didn’t see that.”

And he’s even met Kim’s kids

Being friendly with Kim means Rodman is also chummy with the whole family. While the rest of the world was unsure of whether or not Kim Jong Un and his wife had a second child back in 2013, Rodman confirmed the news. He also leaked the name of their daughter and said he held her, CNN reports.

So, what is Kim Jong Un like as a dad? Rodman says he’s a good, caring father with a beautiful family. And now that Kim’s family has expanded even more with the birth of their third child, we’re curious to see if Rodman will meet that child, too.

Is Rodman the only one capable of stopping nuclear war? 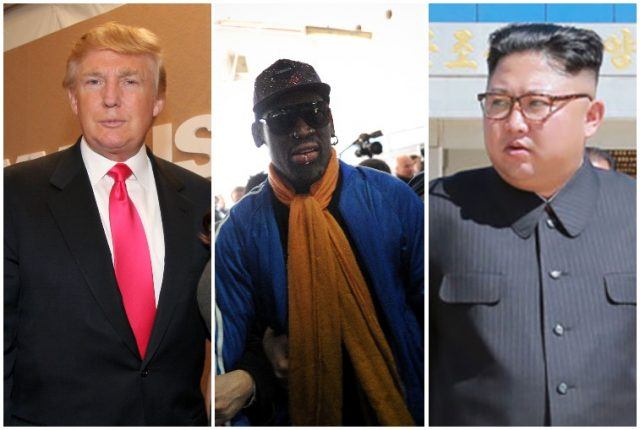 As it stands today, Rodman is the only one who’s on good terms with both Trump and Kim Jong Un. So, could he be the answer to solving the rising tensions between the two leaders? The Guardian reports Rodman is offering to help “straighten things out” when it comes to the Trump-Kim rivalry.

Newsweek says Rodman wants to serve as a communicator between the two, so both sides know exactly what they each want. And he may even have top-secret information just for Trump from Kim, which he refuses to share with anyone but the U.S. president alone.

And Rodman’s friendship with Trump makes things even more complicated 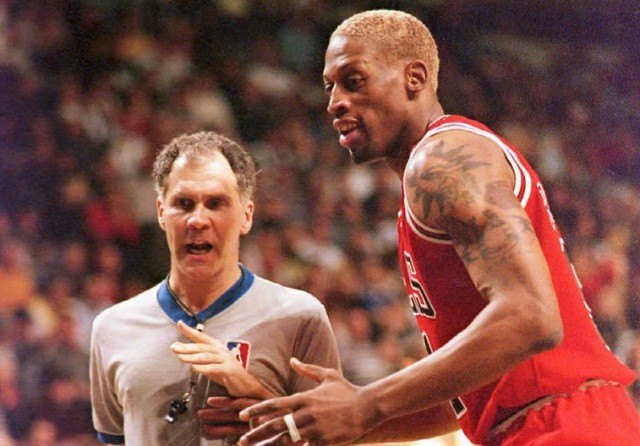 Who would have thought Dennis Rodman would be a mediator between Trump and Kim? | Jon Ruthroff/AFP/Getty Images

Being friends with two enemies certainly complicates matters — but Rodman maintains that if the two ever met, they’d be able to sort out their differences. Business Insider says Rodman insists any dialogue between the two would open doors, though Trump has insisted in the past that he’s not interested in speaking to the dictator. Even with the ongoing tensions, Rodman says he still loves Trump and is happy for the opportunity he had on Celebrity Apprentice.

Trump’s not the first president to deny Kim Jong Un the time of day, either. Rodman says he invited Obama to meet Kim too, but he shut down the request.

One day Trump and Kim may be able to be friends. | Alex Wong/Getty Images

Trump may refuse to talk to the North Korean dictator — but it seems he’s open to the idea of a friendship with Kim Jong Un after all. ABC News reports Trump says, “Strange things happen in life, that might be a strange thing to happen, but it’s certainly a possibility.” He also says that a friendship between them would probably be a good thing.

As for Rodman, he says Trump and Kim are a lot more alike than they think. He also thinks neither of them are really going to go to war with each other — they both just love having the power and control.