Whether you’ve supported his policies or not, there’s no denying John McCain knows his way around the political realm. And now his brain cancer diagnosis has put him on center stage. But cancer is just one of many battles McCain has fought in his life. We can’t forget the senator was also a prisoner of war in Vietnam for more than five years.

Read on to learn how he fought through his horrific prisoner of war experience — and how he’s battling cancer, too. (And don’t miss the most atrocious thing someone said about McCain’s time as a POW on page 7.)

1. McCain ejected from his aircraft and landed in a lake in Vietnam

John McCain was eventually captured and held in a POW camp. | AFP/Getty Images

It was 1967 when McCain was flying his Skyhawk dive bomber for the U.S. Navy during the Vietnam War. And he recounted his harrowing experience in 1973, according to U.S. News & World Report.

McCain said the right wing of his Skyhawk blew off from a Russian missile, and that’s when he ejected himself out of his aircraft. He fell into the Western Lake in Vietnam and was able to swim himself to shore, even with over 50 pounds on his body. It was then that the prisoner of war nightmare began.

Next: McCain had no idea of the atrocities he would see and experience.

2. McCain was told he wouldn’t receive medical treatment until he gave information

Once he made it to shore, McCain was in bad shape. He was taken to the main prison in Hanoi, according to U.S. News & World Report, and it was there that he was interrogated for many days. “I was in such bad shape that when they hit me it would knock me unconscious,” he explained.

The guards told him unless he released information, he would not receive any medical treatment. But every time they asked McCain something, he said he’d just offer them his name, rank, date of birth, serial number, and nothing else.

Next: You’ll never believe what happened when he finally got to the hospital.

3. He says his treatment in the hospital nearly killed him

McCain nearly died from his injuries and lack of care. | AFP/Getty Images

McCain was on the brink of death from a broken leg when the guards finally chose to take him to the hospital, according to U.S. News & World Report. He said he was in a room that was “filthy dirty” and full of rainwater. McCain also said he was “not washed once” during his hospital stay and he “almost never saw a doctor or nurse.”

His guard, a 16-year-old, fed him a few times a day because both his arms were broken, too. They tried to put casts on his arms, but after failing for an hour and a half to manipulate the bones, the doctor settled for a chest cast.

Next: His doctor failing to put on the casts wasn’t the only medical mishap.

4. They botched his surgeries, and he was down to 100 pounds

According to U.S. News & World Report, McCain needed several surgeries on his broken leg, but he only received one while in Vietnam due to his “bad attitude.” After a six-week stay in the hospital, he left on a stretcher with a chest cast on, and his operated leg was stiff. He also dropped down to 100 pounds — a stark difference from his usual 155.

He said when he returned to the States, an orthopedic surgeon examined his leg and said the doctors made the initial incision wrong and cut ligaments on one side. This required McCain to have even more medical work done.

Next: He reportedly spent time in this awful place.

5. His time in solitary confinement was absolutely brutal 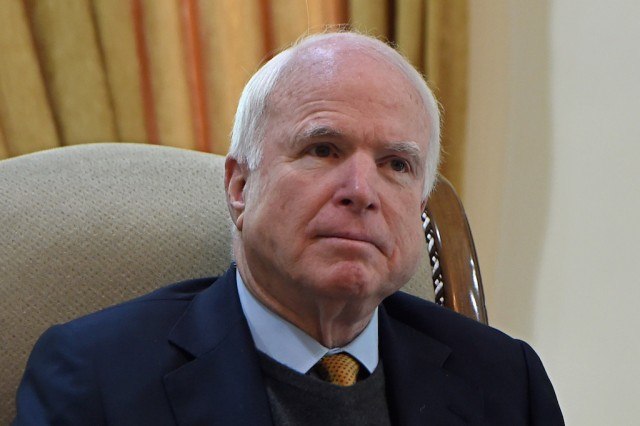 It was a horrifying experience. | Wakil Kohsar/AFP/Getty Images

McCain miraculously overcame the surgeries — but his fight didn’t end there. He was then sent to solitary confinement, which is where he remained for two years, according to U.S. News & World Report.

McCain recalled that his room was about 10 feet by 10 feet with no windows and just two holes in the ceiling for ventilation. He wasn’t allowed to talk to anyone. But he said that “the most important thing for survival is communication with someone, even if it’s only a wave or a wink, a tap on the wall, or to have a guy put his thumb up.”

Next: This is what helped McCain the most through his trials.

6. Prayer helped him in times of trouble

McCain eventually reached the point where he didn’t know how much longer he could go on. He was abused by guards and had many of his healing bones rebroken when he refused to write a statement stating an apology for any war crimes he committed. But even during his toughest trials, McCain recalled he turned to prayer to help him, according to U.S. News & World Report.

“It was asking for moral and physical courage, for guidance and wisdom to do the right thing,” McCain said. “I asked for comfort when I was in pain, and sometimes I received relief.”

Next: We can’t believe a Fox guest said this regarding McCain’s capture.

He was eventually banned from reappearing on the show. | Brendan Hoffman/Getty Images

McCain has clearly been through a lot, especially when he was a POW. But that didn’t stop one guest on Fox from making a totally inappropriate comment.

The Washington Examiner reports Air Force Lt. Gen. Thomas McInerney was speaking with Fox Business Network about enhanced interrogation practices. He then said, “The fact is, is John McCain — it worked on John. That’s why they call him ‘Songbird John.'” Fox News has since banned McInerney from appearing on the network for this highly insensitive comment.

Next: McCain’s latest battle might be his toughest yet.

McCain’s family has been supportive. | Meghan McCain via Instagram

McCain has glioblastoma, a rare form of brain cancer that’s quite aggressive and incurable, according to AARP. He was diagnosed back in July 2017 and has been fighting ever since. The good news is glioblastoma doesn’t spread. But the bad news is it instead deteriorates the brain and can cause seizures, personality changes, and death.

His daughter, Meghan, says his mental health is still strong. And McCain has never been one to give up when times get tough, so he’ll surely keep fighting.

Next: Here’s how McCain feels now.

9. McCain is staying positive for the future

He will likely work for as long as he can. | Drew Angerer/Getty Images

Though McCain very much likes being part of politics, he knows his brain cancer diagnosis will put him out of the political realm sooner rather than later. And he’s not naive to the fact that his illness is also quite deadly.

Time reports in McCain’s book, For Whom the Bell Tolls, he wrote, “The world is a fine place and worth the fighting for and I hate very much to leave it. … It’s been quite a ride. I’ve known great passions, seen amazing wonders, fought in a war, and helped make a peace.” He’s not giving up the fight just yet — but he’s certainly thankful for all he’s already seen and accomplished.