Members of Meghan Markle’s family just didn’t seem to want to let her enjoy the build-up to her wedding. Shortly before the Suits actress tied the knot with Prince Harry, her half-brother made another public display of disdain towards her. And his shenanigans have given us a little more insight into the family’s dynamic. Here’s what a hand-written letter reveals about Meghan Markle and her family. (Check out page 5 to see where Meghan’s brother potentially lied.)

First up: The letter 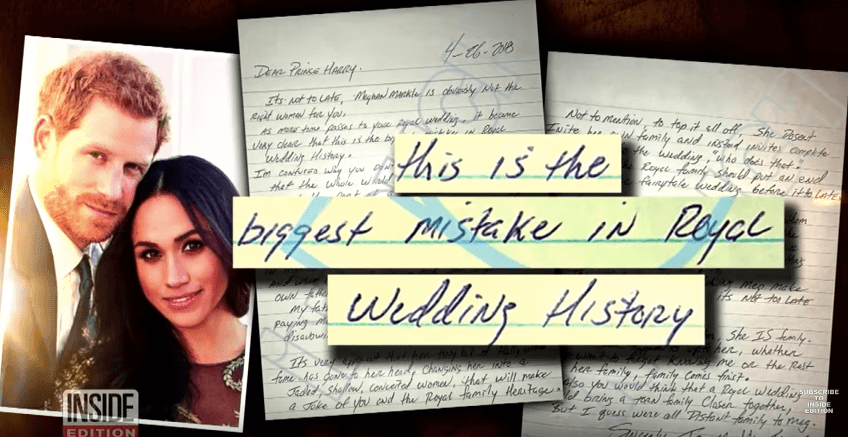 The letter was absolutely astounding. | Inside Edition via YouTube

In his an attempt to trash Meghan Markle, half-brother Thomas Markle Jr. hand wrote a letter to Prince Harry. The memo tells the red-headed royal that “it’s not too late” to back out of the nuptials. He even goes so far as to say that marrying Meghan would be “the biggest mistake in royal wedding history.” Dang! 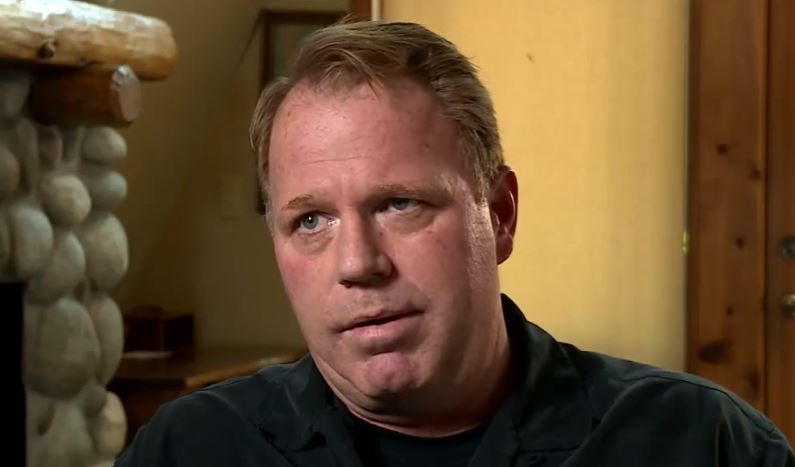 Tom Markle’s hand-written rant goes on to accuse Meghan of bankrupting their father, Thomas Markle Sr., as he tried to help Meghan get her acting career off the ground. “She easily forgets it if wasn’t for my father she would be busing tables and babysitting to pay her old debt off,” the venomous letter reads. His jabs insinuate that Meghan is the reason the Markle family has a fractured and dysfunctional relationship.

Why so much mud-slinging? 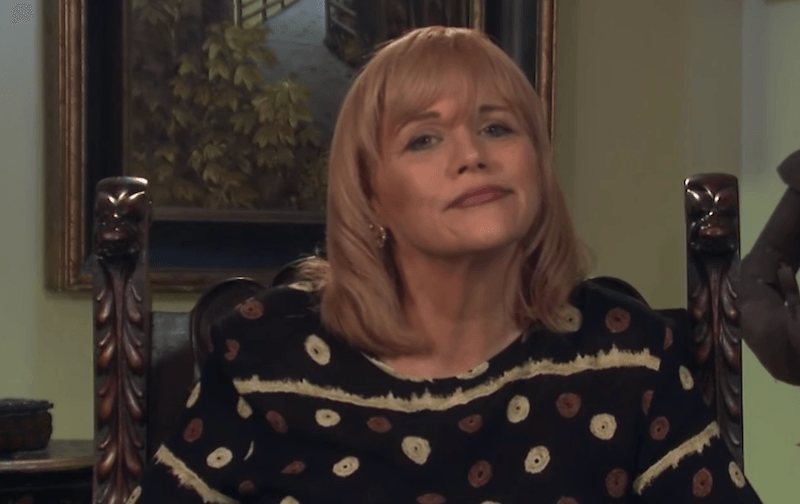 Tom Jr. previously made little fuss when it came to Meghan’s wedding and growing global popularity. However, it appears that not receiving an invitation to the royal wedding made him quite bitter. (When the royal couple sent out invites to members of the public, things got even worse.) He has echoed fellow Markle sibling Samantha Grant’s claims that Meghan is “phony” and that appearing like a good person about to marry a prince is her best acting job yet. Yeesh!

Next: But we also have to question …

Was the family always at odds?

According to Tom Markle’s account, Meghan was close with her half-siblings until she was trying to get her acting career off the ground. He reportedly last saw her at their grandmother’s funeral in 2011, and that she hasn’t spoken to any members of the family since. According to the letter, Meghan is so disliked by the rest of her family that their own father refused to walk her down the aisle. (We later learned that this wasn’t the case.)

Next: Meghan has one family member on her side

Meghan is a mama’s girl 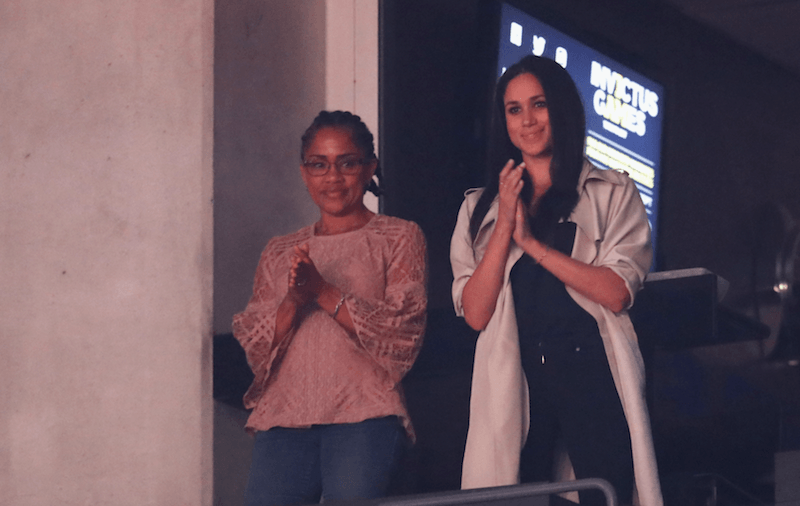 Meghan Markle’s mother seems to be the only one she still associates with. | Geoff Robins/AFP/Getty Images

Despite her siblings’ best efforts, Meghan still has a pillar of support in her family — her mother. Doria Ragland split from Thomas Markle Sr. when Meghan was only six. Meghan was her only child, and grew up with her mother, though she saw her father regularly. It’s clear that they have a very close relationship. Markle said of her mother, “We can just have so much fun together, and yet I’ll still find so much solace in her support.”

Next: Now, here’s where things get extra interesting …

Just a web of lies? 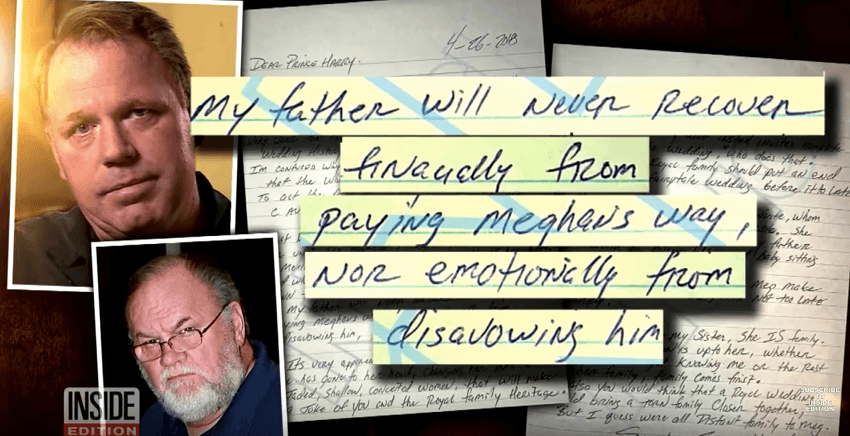 The letter included details about Meghan’s alleged relationship with their father. | Inside Edition via YouTube

Not long after the letter became public, holes in Tom Jr’s story began to show. His claim that Tom Sr. refuses to walk Meghan down the aisle was shot down following reports that Meghan’s father was in the U.K. ahead of the royal wedding to finally meet Prince Harry in person and was being fitted for suits ahead of the big day. Though Kensington Palace did not comment at the time, and her father was not able to make the ceremony, perhaps the Markle family isn’t as torn apart as we’re being told.

Next: Her father’s photos

After all of this drama, Thomas Markle wasn’t looking so great in the media. In order to make himself look better to the public eye, Thomas Markle collaborated with paparazzi to set up staged photos. These photos were sold to the press, but his ploy was uncovered. Markle’s half-sister claims she’s the one who convinced Thomas to stage the photos.

Next: And more interesting still …

Is Grant lying as well?

Samantha Grant has had conflicting things to say about Meghan, so it seems. | Good Morning Britain via YouTube

Before Tom Jr. was writing letters to royals, Samantha Grant was slamming her half-sister Meghan every chance she got. She has called the actress a “social climber” and it has been revealed she has had it out for Meghan ever since they were young. However, after Tom Jr.’s letter went public, Grant went on Twitter to blast his claims. Grant — who uses the last name Markle on social media — insists she has “always been vocal about the things I admire about” Meghan, and that her brother “needs to stop the alcoholism and lies.” Has Grant turned over a new leaf? Or has she just realized she can’t win by bashing her sister? It’s difficult to say.

Next: Harry stands up for her

Harry hasn’t publicly replied to the attacks on Markle, but he did say something that stoked their anger. After Harry and Markle’s first Christmas together, he said the royals are the “family she never had.” This enraged Grant, who claims that Markle’s family has always been supportive.

Next: So now that we’re all inundated with information, we ask …

Does Meghan have a say in this family drama?

Meghan has done a great job of not commenting on the controversy. | Chris Jackson/Getty Images

Meghan kept a low profile as her estranged family members have attempted to portray her in an ugly light. (Although, it’s possible that she was too busy with wedding prep to even think about what’s being said about her in the tabloids.) But it appears that her tactic is to avoid making any type of family feud a public affair. Heck, sometimes that’s the best way to deal with difficult siblings — just don’t feed into their anger.