How the president and family spend their first Thanksgiving holiday can say a lot about how they view the country. Do they spend time with family and dine on traditional, and often humble, fare? Or drop a load of cash on lavish food and make it more about having some “me” time?

When you examine how the Trumps spent their first Thanksgiving in office to the Obamas, you can really get a clearer picture of how they view America and govern the country. While both families enjoyed a dinner together, just about every other aspect of the holiday was very different. Especially considering the time President Trump devoted to doing this (page 7). 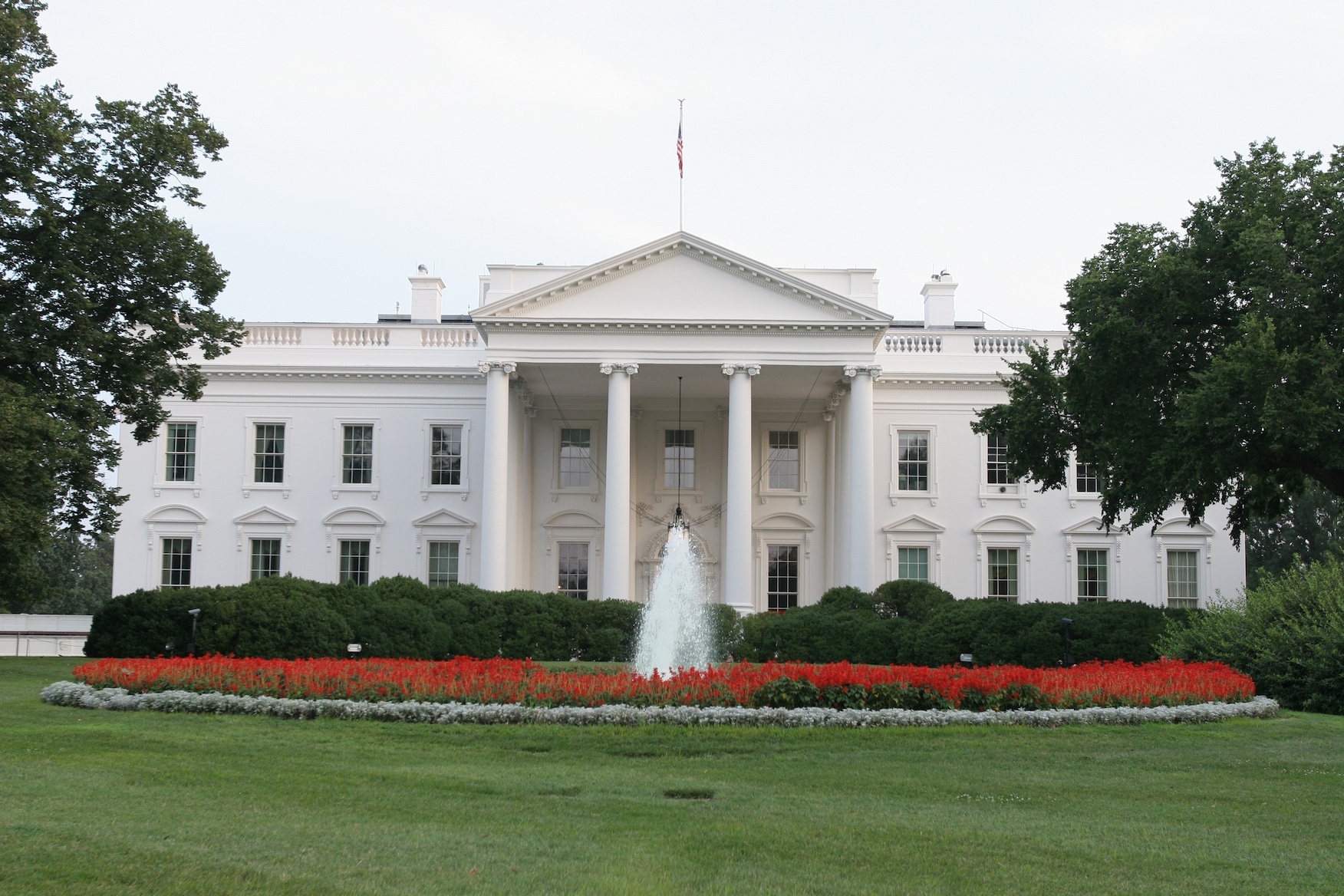 Next: This became an Obama tradition.

2. The Obamas preferred to do this for Thanksgiving 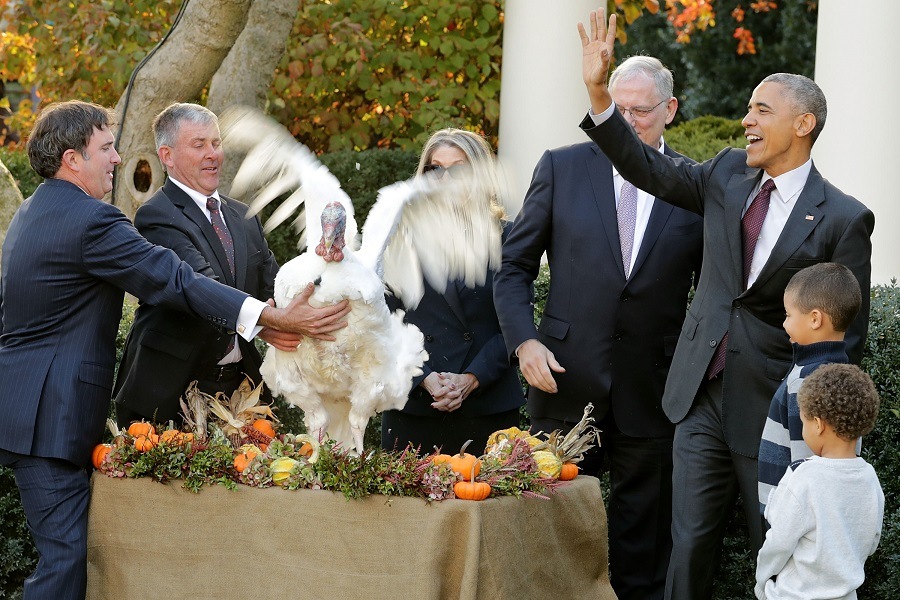 The Obamas would volunteer at a homeless shelter. | Chip Somodevilla/Getty Images

President Obama and his family started a Thanksgiving tradition in 2009 that remained with the family throughout their tenure at The White House. The entire family devoted part of their day handing out food to the homeless at Martha’s Table in Washington, D.C., Essence reports.

The Obamas made volunteerism on Thanksgiving a tradition. During his weekly radio address in 2011, President Obama said this about those who generously give their time during the holiday. “We’re also grateful for the Americans who are taking time out of their holiday to serve in soup kitchens and shelters making sure their neighbors have a hot meal and a place to stay.”

Next: The Obama family also made this a tradition too.

3. Then, the Obama family celebrated together 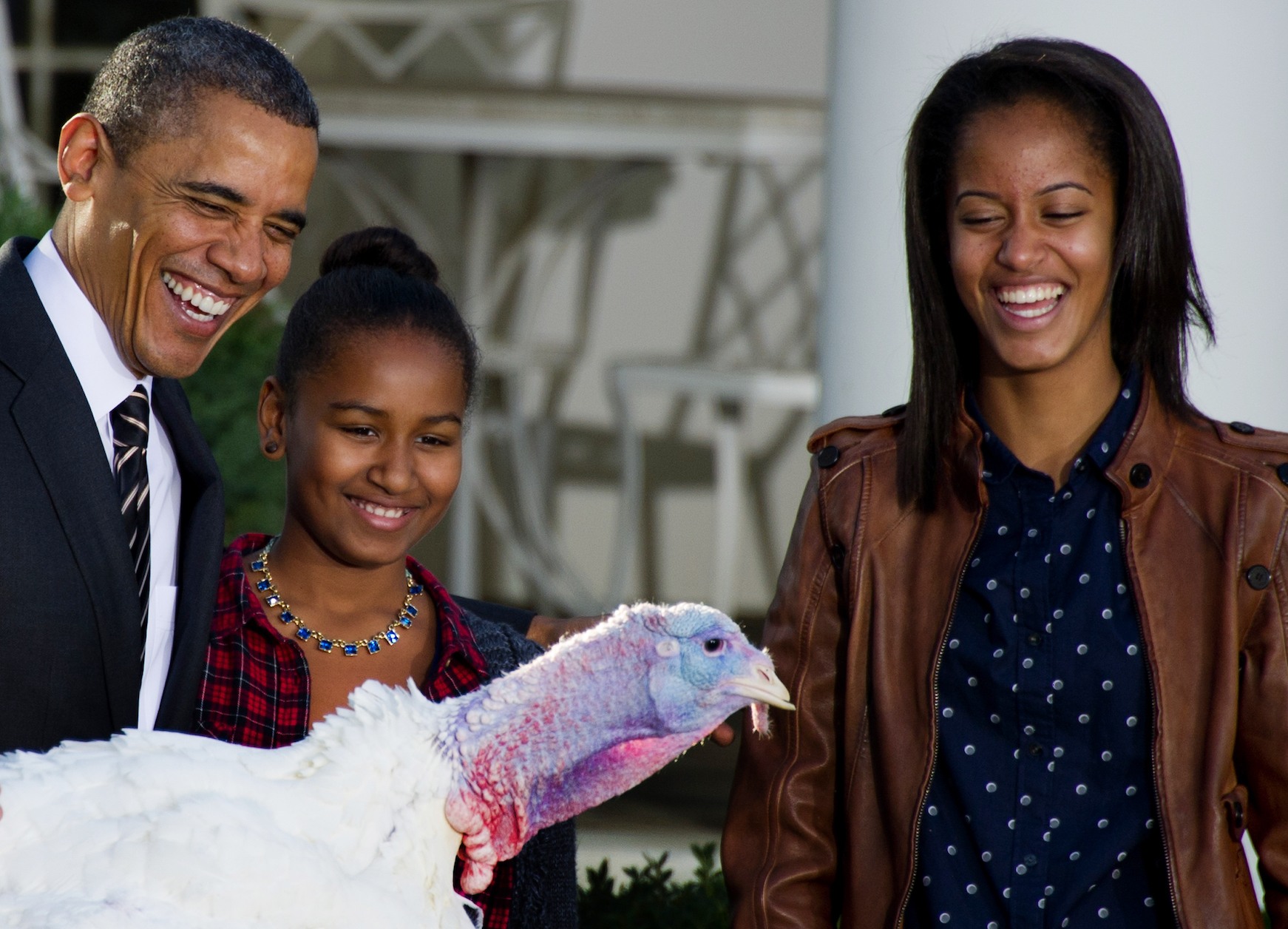 They celebrated the holiday as a family. | Jim Watson/AFP/Getty Images

Like most American families, the Obamas sat down to a complete Thanksgiving dinner in the private quarters at The White House. The family kept the same menu since arriving at The White House too, according to The Hill. Some highlights included turkey, ham, greens, mashed potatoes, sweet potatoes, and green bean casserole. Not to mention two kinds of stuffing, both cornbread, and oyster.

Next: Don’t leave this off of President Obama’s menu.

4. And this was a ‘must have’ for President Obama 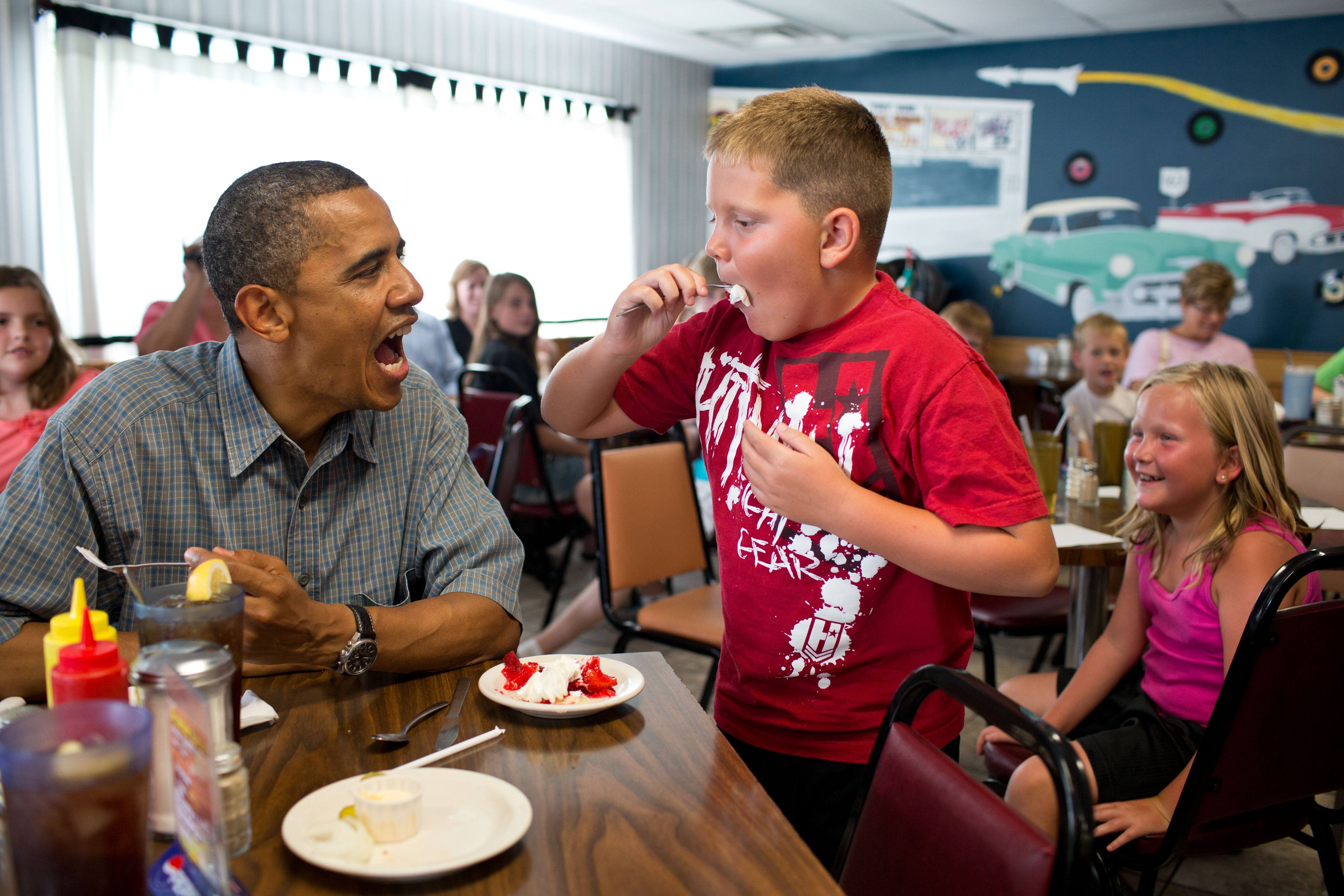 President Obama’s favorite dessert is pie, according to CNN. That meant The White House chefs really had to be on their game to deliver a wide variety, often at least six different pies. Generally, you could expect these pies at the Obama’s first (and every) Thanksgiving feast: banana cream, pumpkin, apple, huckleberry, and cherry pie, according to The Hill. Don’t forget the sweet potato pie too.

Next: The Trump family’s first Thanksgiving was very different from the Obamas.

5. The Trump family got out of town 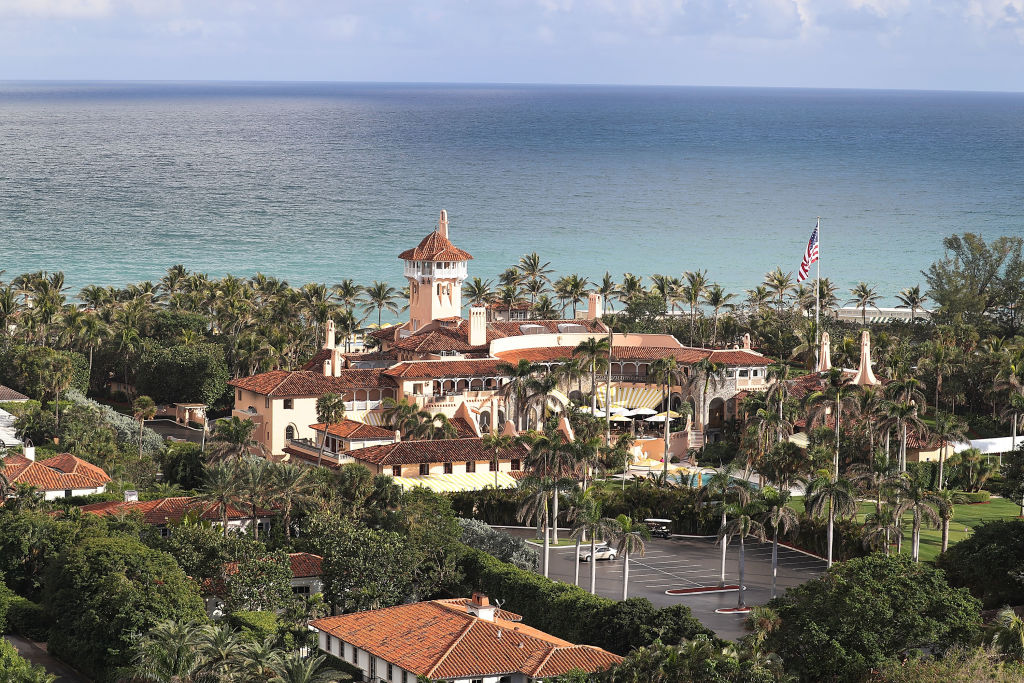 Trump is more comfortable at Mar-a-Lago than he is in D.C. | Joe Raedle/Getty Images

Next: The Trumps did this during the day.

6. This is where the president and first lady spent their day 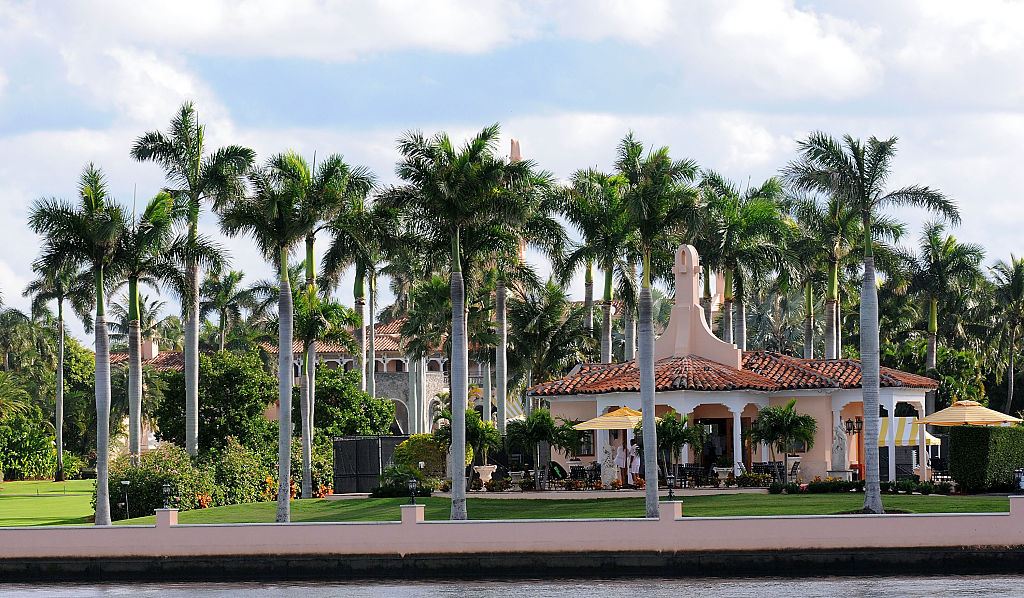 President Trump and the first lady visited with a local Coast Guard station in Florida, according to Newsweek. Melania Trump tweeted an image interacting and meeting with Coast Guard members. While the visit was a chance to thank service members, President Trump couldn’t help but make it awkward. He pointed at one of the Coast Guard member’s arms and said, “What are my chances of beating him in an arm wrestling contest? I think I’d be in trouble. Trouble? I think I’d be in trouble.”

Next: Although he found time to visit the Coast Guard, President Trump did a lot of this.

7. President Trump was also doing a lot of this 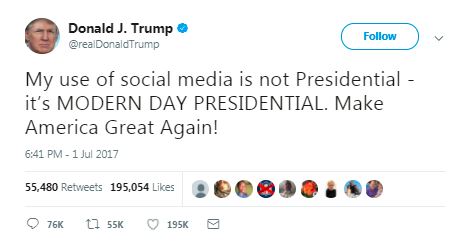 President Trump kicked off his first Thanksgiving in office the same way he began just about every other day–with a tweet. “Will be having meetings and working the phones from the Winter White House in Florida (Mar-a-Lago). Stock Market hit new Record High yesterday – $5.5 trillion gain since E. Many companies coming back to the U.S. Military building up and getting very strong.” And the tweets continued throughout the day too.

Next: This was on the Trump’s Thanksgiving menu–plus this lavish Florida favorite.

8. The Trump family’s Thanksgiving menu had a few untraditional items 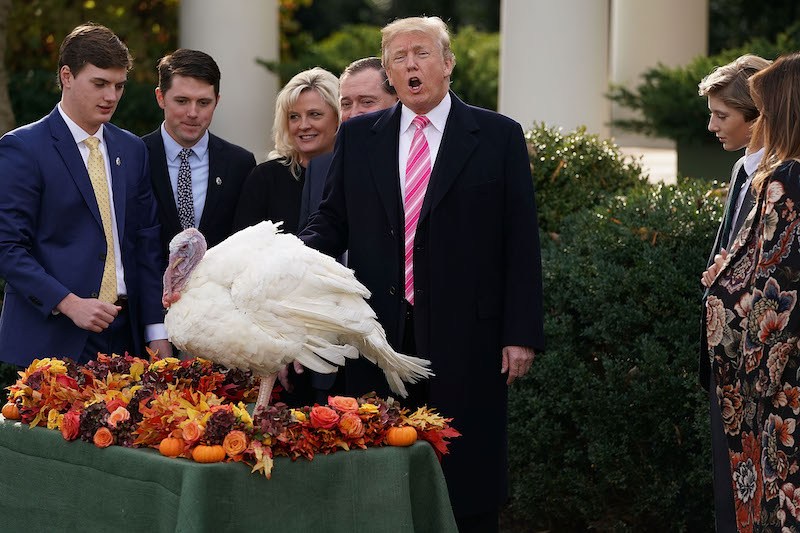 The Trumps enjoyed a rather traditional Thanksgiving meal, but of course, it was kicked up a notch. Dishes included turkey, stuffing, mashed potatoes and gravy, and sweet potatoes with marshmallows, Newsweek reports. The family also integrated some Florida favorites into their meal, too. This included local produce and cheeses, red snapper, oysters, jumbo shrimp, littleneck clams, and large crabs. Plus, the meal featured a true Florida decadent delicacy — stone crab.