Trader Joes provides a fun, reasonably-priced shopping experience that offers plenty of good options. It’s easy to be tricked, however; while they carry a healthy reputation, there are some less-than-healthy items hiding in the trendy packaging.

We’re not knocking Trader Joes,  but we highly recommend you rid your kitchen of these items or avoid them next time you’re at the store. Some of them just aren’t worth your money … while others have delivered gross surprises (page 15).

At around $5 a box (and nearly 400 calories per serving) you’re better off hitting up a butcher shop than buying these bites. The meat itself just isn’t that good and ends up being a waste of money, calories, and packaging. Plus, there are cheaper ways to get the meat fresher.

Next: This prepackaged meal might be convenient, but it isn’t very flavorful … or healthy.

Picking up  dinner at Trader Joe’s? Don’t go for this salad. | Ablokhin/iStock/Getty Image

While the premade salad is convenient, it lacks flavor. It packs 350 calories a serving and over 20% of the average daily maximum of sodium. You’d be much better off getting your own salmon and salad greens. It may cost you more at the time, but in the long run, it’ll go farther and taste better.

Next: Think twice before you reach for this snack

This healthy-looking snack is filled with sugar and fat. | Trader Joe’s

It may seem like a healthy and easy snack, but Trader Joe’s blend of nuts (peanuts, almonds, pistachios, hazelnuts, walnuts, coconuts, sesame seeds), fruit (figs, currants), and honey has the nutrition label of a high-calorie cheat day dessert.

One serving (1/4 cup) has 300 calories and nearly 30 grams of sugar. The high sugar content mixed with little potential to fill you up makes this snack not worth your money.

Next: They call it cereal, but we aren’t so sure

This cereal is quite salty. | Trader Joe’s

If salty cereal is your preference then these are the flakes for you. No? Didn’t think so. Reviewers have referred to the flakes as “aggressively salty,” “tortilla chip cereal,” and “cheese-less purple Doritos.” You may be better off pouring salsa onto this cereal than milk.

However, if you’re looking for a nearly sugar-free option, the Purple Maize Flakes may be for you — if you’re willing to compromise taste. The only have 1 gram of sugar a serving.

Next: Even a Trader Joe’s employee won’t eat this from the store.

This sushi is likely to be processed and old. | What’s Good at Trader Joe’s

It might seem like a fresh, easy dinner option, but think again. Trader Joe’s is not the destination for sushi, nor should it be. They don’t offer fresh rolls made in-store, rather the kind of to-go sushi you’d pick up at the bodega underneath your apartment. If you wouldn’t go for that, don’t opt for Trader Joe’s seafood rolls.

Reviewers specifically warned against buying the California rolls. They’re “filled with … mush that vaguely tastes like seafood.” Plus, a former Trader Joe’s employee claimed that they were told not to eat the sushi. It’s not made in the store and “sits in a box from production to your shopping bag.”

Next: Skip the deli

This salad is frighteningly unhealthy. | What’s Good at Trader Joe’s

This chicken salad may boast its high protein content, but it also packs plenty of fat and sodium: 21 grams and 210 mg per serving, respectively. Your better option may be to buy all the fixings for chicken salad — sans curry — and make it yourself.

Not only would a homemade chicken salad be fresher, but you can make it as protein-heavy and fat-free as you’d like. Reviewers pointed out that eating all three servings equates to 1,000 calories and nearly as many grams of fat found in 2 Big Macs.

Fooducate rates the quiche a D+ for nutrition, and with good reason. One quiche has over 50% of your daily saturated fat, over 35% of your daily sodium, and lacks any whole grains. Since the broccoli is originally frozen, then cooked to melt with buttery crust an cheese, it hardly holds up as a nutritional vegetable.

Grab your own eggs, fresh produce, and supplies to make your own quiche. Better yet, stick to just the veggies and make an omelet: it’s high in protein and low in carbohydrates.

Next: You can easily create your own rather than buying this frozen option.

Consider making your own falafel next time you get a craving for them. | HandmadePictures/iStock/GettyImages

Falafel should be a protein substitute for vegetarians to mix with rice, salad, or a wrap, but the pre-packaged TJ option falls short. They’re mealy and dry and not as healthy as you’d hope. One serving packs 320 calories, nearly 20 grams of fat, and almost 500 mg of sodium.

You’d be better off buying canned chickpeas from TJs and creating your own falafel. You’ll likely be able to make an option with fewer preservatives — and therefore fewer calories and grams of fat.

Next: Sodium, carbs, and calories, oh my.

It may seem tedious, but you can definitely make a low-sodium wonton soup. The Trader Joe’s premade option isn’t your best bet if you’re trying to watch your salt intake. The prepackaged chicken and vegetable wonton soup is deceivingly healthy — if you only pay attention to the 220 calories per bowl.

It also has 1,060 mg of sodium per bowl. The maximum recommended daily amount is 2,300 mg for healthy adults.

Next: Just because it’s popular, doesn’t make it healthy

This hearty dinner option is full of sodium. | Bhofack2/iStock/GettyImages

Once rated the No. 1 item in “popularity” at Trader Joe’s, the mandarin orange chicken has since fallen from its pedestal. It’s MSG-free, sure, but it’s still deep fried and covered in sauce. Unfortunately, that sweet and sour sauce makes a big difference when it comes to calories, sodium, and fat.

If you’re really in the mood for chicken, try their Spatchcocked Lemon Rosemary Chicken breast instead. It has an olive oil-based marinade and the rosemary is an unlikely source of iron.

Next: One spoonful can easily turn to half the jar. 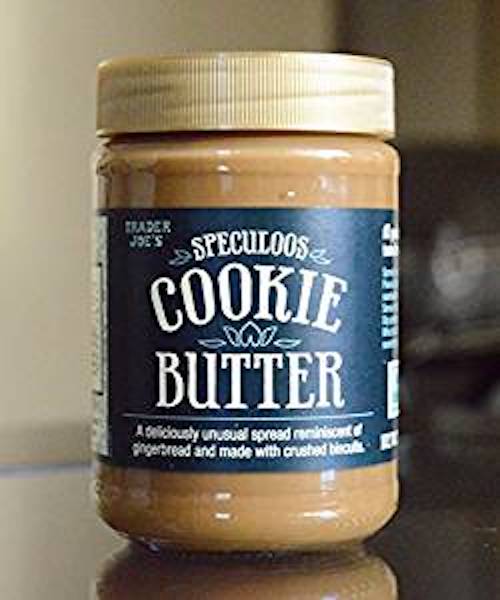 You could easily overeat this butter. | Amazon

It was rated Trader Joe’s most popular product in 2016 with good reason — the cookie butter is peanut butter’s more delicious, less nutritious cousin.

One tablespoon (roughly three spoonfuls) of the butter packs 90 calories, 6 grams of fat and 8 grams of carbs. If you can resist eating more than three small spoons of this cookie butter at a time, we commend you. It’s probably best to keep it out of the kitchen — away from you and your kids — or opt for natural sunflower seed butter instead.

Next: It might be vegetarian, but that doesn’t make it healthy

Trader Joe’s carries an impressive number of meat alternatives for vegetarians. Some are healthier than others, however, and there are definitely some you should leave on the shelf: their soy chorizo included.

The soy chorizo is packed with fat and sodium. Plus, too much soy is bad for you, contrary to popular belief. You’re better off reaching for their vegetarian Smart Dogs.

Next: You’re better off buying the brand-name option.

This pastry is chock-full of sugar. | Trader Joe’s

Put the “organic” label on it all you want, but these are just glorified PopTarts with less flavor. They only have 10 fewer calories and 3 fewer grams of fat — so they’re hardly better for you — in fact, they pack 6 more grams of sugar per pastry than the name-brand PopTart.

These burger patties are great for dinner parties. | Delmonte1977/iStock/Getty Images

The patties might be 80% lean but they’re still full of fat — 23 grams (9 grams saturated fat) per serving, in fact. It’s a good idea regardless of where you shop to cut back on red meat. So take the opportunity, especially at TJ’s, to stock up on frozen turkey patties or salmon patties. They’re way less fatty and better for your heart than beef.

Next: You won’t believe what this woman claims she found in her “clean” TJ’s produce.

Kale is healthy (and trendy, it seems), and under any other circumstances, it’d be an easy-to-justify purchase. However, a woman in Washington D.C. told PEOPLE that she found a dead lizard in a bag of kale from Trader Joe’s in early April 2018.

Trader Joe’s confirmed they’ll investigate the complaint. “We are committed to providing customers with great products of the highest quality and are currently working with our vendor to look into and address the matter,” a TJ spokesperson said. Still, for the time being, we’d steer clear of the kale.