The Tragic Mental Health Impact of Separating Children From Their Parents 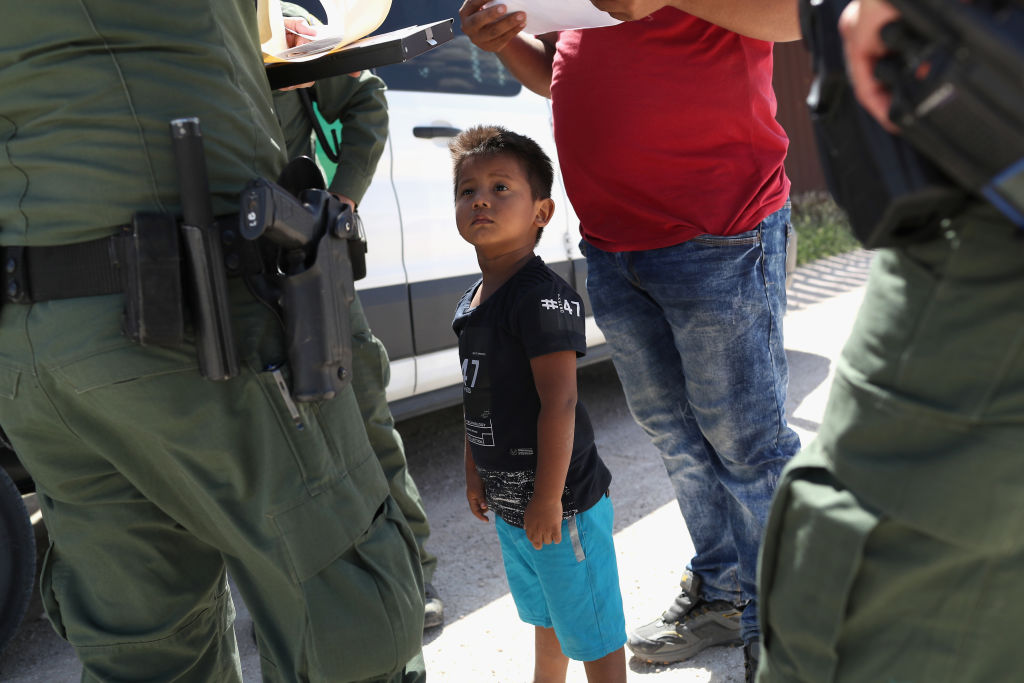 A boy and father from Honduras are taken into custody by U.S. Border Patrol agents near the U.S.-Mexico border. | John Moore/Getty Images

Thousands of immigrant children who were ripped from their parents are likely to suffer from “long-term, devastating psychological effects,” Colleen Kraft, president of the American Academy of Pediatrics told The Washington Post.

Kraft witnessed first hand the level of distress at the juvenile detention centers along the Texas border. One toddler was so anxiety-ridden she was screaming and pounding a mat with her fists. A shelter worker tried to calm the child by distracting her with books and toys. But her efforts did little to alleviate the child’s distress.

Distress mounts because children cannot be touched while at the facility–this includes being held, hugged or consoled physically. “The really devastating thing was that we all knew what was going on with this child,” Kraft told The Washington Post. “We all knew what the problem was. She didn’t have her mother, and none of us can fix that.”

A consortium of mental health professionals released a petition about the Trump Administration’s “zero tolerance” policy. “To pretend that separated children do not grow up with the shrapnel of this traumatic experience embedded in their minds is to disregard everything we know about child development, the brain, and trauma.”

The bond of trust between the child and adult evaporates in situations like this, Lisa Fortuna, medical director for child and adolescent psychiatry at Boston Medical Center told The Washington Post.

Caregivers and infants form an emotional bond at birth. “Our bodies secrete hormones like oxytocin on contact that reinforces the bond, to help us attach and connect,” Fortuna told The Post. Certain areas of the brain may lack normal development when the bond breaks. “The part of their brain that sorts things into safe or dangerous does not work like it’s supposed to. Things that are not threatening seem threatening,” Fortuna said.

In 2000, Charles Nelson, a pediatrics professor at Harvard Medical School studied the impact of child-parent separation in Romania. He found children in orphanages to exhibit behavior like, “rocking uncontrollably and hitting themselves, hitting their heads against walls.”

He also found children separated from their parents at a young age had less white matter in their brain as they aged. Plus brain activity was lower than anticipated. “If you think of the brain as a lightbulb,” Nelson said, “it’s as though there was a dimmer that had reduced them from a 100 watt bulb to 30 watts.”

The devastation can last a lifetime

The child’s age of separation makes a tremendous difference. Separating children under age 10 is worrisome, but the impact for children under age five is extremely traumatic, child psychologist Megan Gunnar of the University of Minnesota told BuzzFeed News.

Lasting impacts include “alcoholism, substance misuse, depression, suicide, poor physical health and obesity,” according to a statement by the American Public Health Association.

“If you take the moral, spiritual, even political aspect out of it, from a strictly medical and scientific point of view, what we as a country are doing to these children at the border is unconscionable,” Luis Zayas, a psychiatry professor at the University of Texas at Austin said to The Washington Post. “The harm our government is now causing will take a lifetime to undo.”