These Cities Will Be so Hot by 2100, You Won’t Be Able to Live in Them

As we’ve seen with the melting glaciers, disappearing rainforests, and erupting volcanoes, the earth is being seriously affected by climate change. And unless changes are made, it’s only slated to get worse. In fact, in under 100 years from now, there are many cities that will be downright uninhabitable due to the severe temperatures.

As the earth heats up, so will these cities. Here are the ones you’ll have to evacuate by the year 2100, including one city dubbed “the hottest place on earth” on page 12.

If you think it’s hot in Arizona now, just wait until the climate gets even more severe. As meteorologist Eric Holthaus tells Vice, “It’s currently the fastest warming big city in the U.S.” And while the summers are brutal now, one study said the weather will be, on average, three to five degrees hotter by 2050. You can imagine what that spike will look like by 2100.

Along with the heat, Arizona will also face a drought issue in the coming years. Eventually, agriculture will be greatly affected.

Next: This Middle Eastern city is already one of the hottest in the world.

You may not be planning on visiting the Middle East anytime soon. But if you are, don’t hesitate, as you may physically never be able to withstand the climate. Time reports a study published in the journal Nature Climate Change finds Bandar Abbas, Iran, may experience heatwaves so severe that you won’t be able to live through them. And these heatwaves may strike as early as 2100.

How hot is too hot? The report says this city may reach 170 degrees Fahrenheit.

Next: This booming city is also slated to have issues.

This city is booming with tourism as of late, so if you’re planning on seeing Abu Dhabi in your lifetime, it’s recommended you do so soon. In the study by Nature Climate Change referenced by Time, Abu Dhabi was another city slated to be too hot to live in by 2100. Like Bandar Abbas, this city’s temperatures could reach 170 degrees Fahrenheit by 2100.

The good news is that experts believe heat waves like this may only happen once every decade at most. But even so, they can be lethal when they do occur.

Next: This city has been facing sweltering temperatures lately.

In April 2018, parts of northern and central India experienced deadly heatwaves. Accuweather reports locations such as New Delhi saw daily temperatures above 110 degrees Fahrenheit. Normally for this time of year, New Delhi can expect temps in the low 90s. So consistent days above the 100-degree threshold affected citizens in a serious way.

It seems no end is in sight for this severe weather, either. We can only expect the daily temperatures to soar way into triple digits for the foreseeable future.

Next: The winters are getting shorter and shorter in this city.

Situated right next to India, it’s no wonder a city in Bangladesh makes the list. And this country has been experiencing a heat crisis for some time now. A study from the World Academy of Science, Engineering and Technology finds the frequency and duration of extremely hot temperatures across the country are getting worse year by year. During 2003, one heatwave alone killed 62 people — so you can only imagine how bad things are slated to get for residents.

As for Dhaka, the factory workers are going to really feel the effects of the heat. In fact, they already have.

Next: This American city is a favorite for many vacation-goers.

You know how hot and humid Florida can be in the summer. Unfortunately, that’s not getting better anytime soon. Miami New Times explains Miami is well on its way to becoming inhospitably hot within the next 100 years.

That’s not the only problem the city is facing, either. It seems rising sea levels could also make the city inhabitable before the heat does. And superstorms will also hit the city hard, forcing many from their homes.

Next: Here’s another city in a familiar state that’s setting heat records.

Phoenix is hot, but Yuma just might be even hotter. AAA Northeast reports the average high temp in Yuma is 107 degrees Fahrenheit, and the highest it’s been so far is 124 degrees. What’s worse is that Yuma barely gets any rain thanks to its desert climate.

It may have been 1995 when Yuma hit its all-time high, but we can expect this city to see more soaring temps like this as the years go by. And if you’re susceptible to sunburn, you’ll also want to avoid Yuma, as it’s one of the sunniest places on earth.

Next: Here’s another U.S. city to watch.

New Mexico as a whole is quickly getting hotter and drier than many other places in the U.S. thanks to its location. Union of Concerned Scientists reports the annual temperature in New Mexico increases by about 2.7 degrees annually, and we’ve seen this increase since 1970. You can do the math to see how much hotter it will be in 2100 compared to now.

New Mexico’s big on agriculture, so this temperature increase is already affecting things. And as we see water getting scarcer and scarcer, this is another major concern.

Next: This city has seen some of the hottest temperatures ever recorded.

It seems Iran as a whole is seeing extreme temperatures that are only going to get worse. The Independent reports in June 2017, temperatures in Ahvaz soared to 128.7 degrees Fahrenheit. Forecaster Etienne Kapikian said it was the highest temperature ever recorded in June over mainland Asia, beating out another record-holding temp in Iran of 127.4.

And the heat didn’t stop there. One weather website recorded that the heat got up to above 129 degrees Fahrenheit, which would put it close to the highest temperature ever to happen on earth.

Next: This African city holds the highest annual temperatures and will continue to get hotter.

It may not be reaching 129 degrees Fahrenheit, but Dallol, Ethiopia, is relentless when it comes to how consistently hot it gets. Mother Nature Network explains for seven years in the ’60s, Dallol had daytime temperatures that were constantly triple digits. And because the annual temperature stays consistent throughout the year, there’s barely any break from the heat.

With climate change, it’s only going to get worse for Dallol. The good thing is it it’s virtually a ghost town of a city at this point, so not many people will have to leave.

Next: Be glad you don’t live in this scorching hot climate. 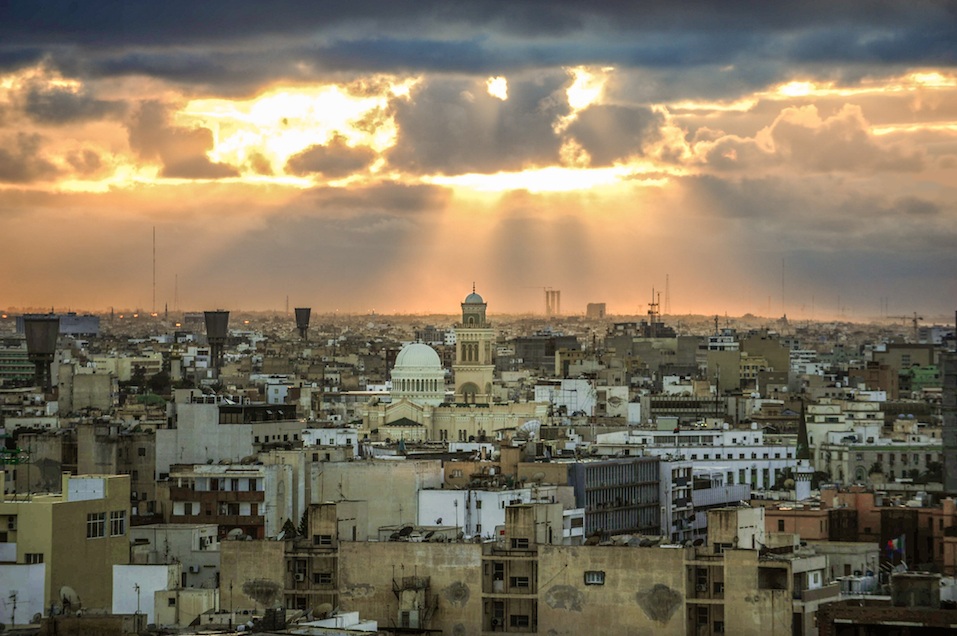 Another city in Libya | iStock.com/batuhanozdel

It’s quite close to the equator, so it’s no wonder El Azizia is known for its extreme climate. AAA Northeast says the hottest temperature ever recorded was in this town when it hit 136 degrees Fahrenheit in 1922. Considering how severe climate change has become and how global temperatures are slated to get warmer, we’re expecting this to occur in Libya once again.

There’s really nothing to help the residents of El Azizia from the blazing heat, either. Even the dust-bearing desert winds aren’t a reprieve — and they can even raise the temperatures by 20 degrees. Yikes.

Next: Will this booming city survive climate change?

This well-populated city is already seeing major trouble due to the heat from climate change. The Guardian notes Kuwait City regularly reaches 122 degrees Fahrenheit in the summer, and in 2016, it was dubbed “the hottest place on earth.”

The city is concerned about climate change and hoping to prepare for the worst. But as for the residents, not everyone can afford adequate shelter from the heat as it worsens. And since resources like water and oil are getting slim, it’s likely we’ll see many residents of Kuwait attempting to leave.

Next: Visiting this country? Beware of one city’s extreme heatwaves.

If you’re taking a vacation to Australia, you may want to head far away from Darwin. News.com.au explains this city has seen temperatures close to 160 degrees Fahrenheit in some parts.

Not only is the heat extreme, but the humidity is also making the area totally unbearable. The “build-up,” the hot, sticky weather right before the wet season, is becoming too thick for many residents. The publication suspects Darwin will be totally uninhabitable in the near future.

Next: This country’s already going through a heat crisis, particularly in this city.

China’s known for its heat and humidity, but there are specific cities in the country that are worse off than others. Turpan, for example, is one of the most oppressively hot — and it’s only going to get worse.

The Telegraph notes five and a half years worth of data found temperatures in this city regularly nearly hit triple digits and stayed consistently in the 95-degree Fahrenheit region. It’s become so bad that it’s now known as China’s “heat pole” and contains the extremely hot Flaming Mountains.

Next: This city may also reach temps of up to 170 degrees Fahrenheit by 2100.

You may not think about Qatar too often, but Time notes it’s another country picked by Natural Climate Change that could see temperatures that reach 170 degrees Fahrenheit by 2100. In particular, the city of Doha might be the worst hit of all.

What’s worse is that the 2022 World Cup is supposed to be held in Doha, according to Bustle. But by that point, many believe it will be too hot for anyone to safely compete. And as for those who need to build the infrastructure for the World Cup, they’ll have trouble with that, too.