These Fast Food Items Are Probably Killing You

Most people love to indulge in a juicy fast food burger or sugary drink. But you might want to rethink these food items. Some contain added chemicals that are harmful to our bodies, while others are packed with fat, calories, and sodium. Either way, these fast food items are probably killing you.

Panera Bread might be close to the office, but the Mac and cheese there is nowhere near healthy.  | Scott Olson/Getty Images

Panera Bread’s menu items might be raised without antibiotics, but they definitely aren’t made without fat and sodium. A small cup (yes, small) of Panera Bread’s mac and cheese contains 1,230 milligrams of sodium, which is more than half a day’s worth, according to the American Heart Association. Plus, it has a shocking 30 grams of fat — an insane amount for a small order.

Next: This McDonald’s classic should actually be avoided.

This popular breakfast sandwich is full of calories and preservatives.  | Justin Sullivan/Getty Images

McDonald’s has several menu items that contain dangerous additives, such as partially hydrogenated oils (PHOs). One popular item is their Egg McMuffin. The process of hydrogenating oils means turning them from a liquid to a solid; it’s an industrial process that creates trans fats. Trans fats have a strong correlation with heart disease. The FDA has considered banning PHOs, but no action has been taken.

Next: You might want to rethink eating this fast food chain’s beef.

The beef sold at Taco Bell has some pretty bad ingredients and chemicals. | Scott Olson/Getty Images

Some fast food items, such as Taco Bell’s beef, contain an additive called caramel coloring. It actually contains chemicals that have been linked to thyroid, liver, and lung cancer, plus leukemia, according to Food Network Canada. The U.S. Center for Science and Public Interest recommends avoiding them, yet several fast food places still put them in their food.

Next: This Taco Bell menu item should also be avoided.

One of the worst things you could eat off the Taco Bell menu. | Lawcain/iStock.Getty Images

Besides being stuffed with beef containing harmful caramel coloring, this crunch wrap is loaded with fat, calories, and sodium. It has a whopping 700 calories and 30 grams of fat. Plus, it has more than half a day’s worth of sodium. And the small amount of lettuce and tomato it contains aren’t enough to make up for all of that.

Next: Here’s why this fast food chain’s heartiest dish shouldn’t be eaten.

Wendy’s chili contains a little ingredient called sand. Yes, the same sand that you love in between your toes at the beach can also be enjoyed in this Wendy’s menu item. It’s technically silicon dioxide in the chili, and Food Network Canada says it’s not something you want to ingest. It can also be found in certain Taco Bell menu items.

Next: This burger could be considered a heart attack on a bun.

There might just be too much bacon in this sandwich. | Checkers

If you’re looking to avoid heart disease, you won’t want to indulge in the Checkers Baconzilla. If its 810 calories aren’t enough to turn you away, maybe its 52 grams of fat are. According to Eat This, Not That! it also contains 2,000 milligrams of sodium, which is nearly a whole day’s worth. (The recommended amount is no more than 2,300 milligrams.) It’s a heart attack on a bun.

Next: And these buns should just generally be avoided.

The McDonald’s buns are packed with chemicals. | Spflaum1/iStock/Getty Images

McDonald’s sandwich buns are another one of those food items that contain chemicals you won’t want in your body. They’re made with azodicarbonamide, which is a common ingredient used in rubber yoga mats. Many breads, such as fast food buns and rolls, contain the ingredient. And while Food Network Canada reports that it won’t necessarily kill you, it’s still one of those things your body was not made to digest.

Next: This popular burger is the unhealthiest option on its menu. 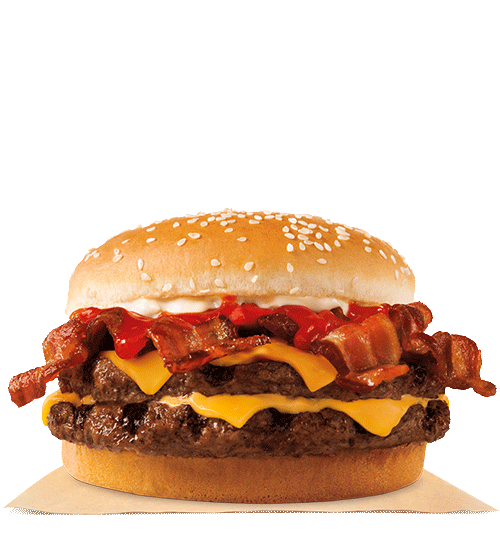 The most fattening thing you can purchase at Burger King. | Burger King

The Bacon King sandwich is the unhealthiest menu item you can order at Burger King. It seems like you could get heart disease just from reading the nutrition facts. 1,150 calories, 79 grams of fat, and 2,150 milligrams of sodium are headed your way if you decide to consume this monstrous burger. It’s not worth it when you can order a Whopper Jr. and add a piece of bacon to get your fix.

Next: This big breakfast is a big no.

This massive McDonald’s meal also happens to be the unhealthiest meal on its menu. It’s packed with 1,350 calories, 65 grams of fat, and 155 grams of carbs. It can definitely be split between a few people, so if you need to order it, at least have a friend help you out. Otherwise, you’re looking at a lot of bad stuff hitting your body all at once.

Next: Those sugary drinks are worse for you than you thought.

This beverage is full of more sugar than you need in a single drink. | iStock.com

Added sugars have virtually zero essential nutrients. Too much sugar affects brain function, can lead to heart disease, and can cause fatty liver disease. So if you frequently drink Dunkin Donuts Coolattas, think again. A large cotton candy Coolatta contains an unbelievable 120 grams of sugar, all of which soars through your body, increasing blood sugar levels and leading to health problems down the road.

This drink is practically a giant dessert. | Starbucks

The cinnamon roll Frappuccino from Starbucks isn’t much better than a Dunkin Donuts Coolatta. A venti one of these will set you back 102 grams of sugar, not to mention 600 calories and 18 grams of fat. Unlike most fast food options, these sugary drinks don’t contain trans fats, but they should still be avoided if you want to see your 100th birthday.

Next: You should pass on foods containing this ingredient.

Products with MSG are bad for your overall health. | iStock.com

Fast food has always had a relationship with MSG, or monosodium glutamate. And MSG actually has its own name for symptoms — known as the MSG symptom complex. Those symptoms include headache, numbness, chest pain, nausea, and more. Although MSG might not be a direct killer, it still makes us feel uncomfortable, which is a sign that it shouldn’t be in our bodies. More studies need to be done to determine how dangerous is actually is.

Next: Here are the most important factors to look for on nutrition labels.

Foods with added sugar should be limited in your pantry and refrigerator. | Styxclick/iStock/Getty Images

Sugar is bad for you for several reasons, but your heart health is the biggest reason. A diet high in added sugar can have a negative impact on heart health. According to a Harvard study, those who consumed 25% or more of their daily calories from sugar were twice as likely to die than those who consumed 10% or fewer calories from sugar. Added sugar is different from the natural sugar found in fruits. Fruit doesn’t need to be avoided, but fruity drinks should be in order to prolong your heart health.

Next: This ‘silent killer’ often gets overlooked — and it shouldn’t.

Watch out for hidden sodium in your foods. | LIgorko/iStock/Getty Images

Sodium is a silent killer because people almost never know to look for it on nutrition labels. A food might advertise that it’s low in fat and calories, but those foods are almost always higher in sugar and sodium to add flavor. Too much sodium can lead to kidney failure, heart disease, and stroke. It can also lead to high blood pressure, which is the leading cause of cardiovascular disease. Those over age 50 should be especially mindful of their salt intake and try not to consume more than 1,500 milligrams per day.

Next: These are the worst of all fats.

Trans fats are essentially fats created by the manmade process of adding hydrogen to oil. Trans fats raise your bad cholesterol levels and lower the good cholesterol levels. Over time, this leads to heart disease and stroke. In 2013, the FDA said trans are fats are not Generally Recognized as Safe (GRAS), which means they should not be consumed. They have not been banned, but their negative health effects have led many to petition for a ban.