There’s nothing that ruins a fun night out to dinner quite like food poisoning. You hear it on the news, too — food poisoning here, or an outbreak of disease there. But you never really suspect your favorite restaurant chain could be the reason behind your sickness. And in some instances, these popular eateries are known for their repeated offenses.

Want to know if your favorite made the list? Here are the places you’ll want to think twice about dining in.

Is that chicken burrito really worth the risk? | Joe Raedle/Getty Images

Due to this restaurant chain’s frequent run-ins with food poisoning, it’s losing quite a lot of business. Business Insider explains back in 2014, Chipotles in 14 states were closed due to E. coli and norovirus outbreaks. And this restaurant chain’s rate of illness is nine times higher than the average rate when compared to 10 other competitor eateries.

Though things were looking up for Chipotle after the 2014 debacle, they dealt with another norovirus outbreak in July at one location in Sterling, Virginia. Hopefully they’ll see improvements going forward.

Burger King had to remove burgers from the menu

Their burgers were linked to sickness. | Thomas Lohnes/Getty Images

A Burger King without burgers seems all wrong, but it’s what happened back in the late ’90s. CNN reports Hudson Foods, Burger King’s beef supplier, had a massive ground beef recall after 16 people in Colorado fell ill from E. Coli. You could also find the same beef sold in Walmart, Boston Market, Safeway, and Sam’s Club stores at the time.

One out of every four Burger King locations around the U.S. took beef items off the menu. And some locations even offered ham and cheese sandwiches as a replacement.

Their reputation was tarnished after the scandal. | Kzenon/iStock/Getty Images

Perhaps the bigger lesson here is to skip burgers from fast food giants. In any case, The New York Times reports back in 1993 that Jack-in-the Box served burgers contaminated with E. coli. And it had major consequences for the company, as it killed four children and left over 600 sick, says The Oregonian.

The company dug an even deeper hole after a lot of finger-pointing as to what caused the illness. But the fact remains proper cooking techniques kill the bacteria, so the company finally took responsibility. As a result of their negligence, sales plummeted.

The popular fast food chain has had its share of trouble. | Jim Watson/AFP/Getty Images

Yet another E. coli outbreak affected a major fast food chain back in 2000. Marler Clark reports contaminated ground beef was the main culprit for the outbreak. And the employee’s cross-contamination and bad sanitation practices certainly didn’t help.

A health department investigation revealed food-prep staff soaked lettuce in the same area of the sink used for rinsing bloody pans that cooked raw beef. They also wiped their hands with one of the towels used for cleaning raw meat juice.

These tacos might not be all they seem. | iStock.com

Back in 2011, a huge salmonella outbreak affected nearly 70 people spread across Texas. Though Taco Bell was the cause of only about half of the cases, the Mexican-style chain restaurant took a major hit, says ABC News.

And this isn’t a first for Taco Bell, either. In 2006, 71 people from five different states fell ill from E. coli after consuming lettuce from the restaurant chain. If you’re a fan of their Crunchwrap Supremes and tacos, you may want to keep this mind. 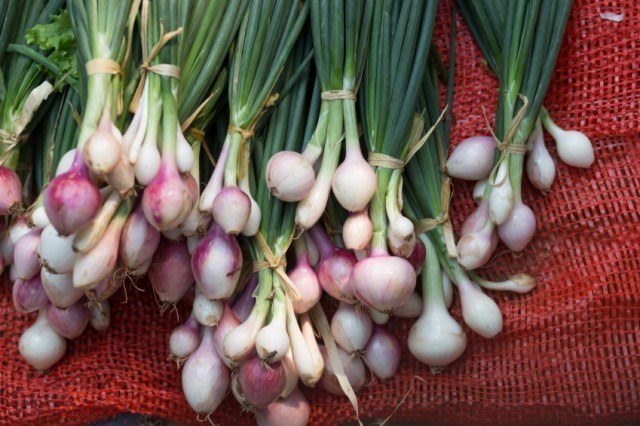 The incidents were traced back to green onions. | iStock.com

Hepatitis A outbreaks aren’t the most common, but this food poisoning case from 2003 put Chi-Chi’s in serious trouble. Marler Clark explains green onions imported from Mexico brought the illness to one location in Pennsylvania. In total, over 650 people contracted the disease, and four died from liver failure. And because over 9,000 people were potentially exposed to the virus or ill customers, they all received shots to prevent the infection.

McDonald’s was one of the first restaurants hit with E. coli

Whether you love it or hate it, McDonald’s is a staple we’re all familiar with. And food poisoning rocked this fast food giant way back in 1982. Morning Ticker recalls the E. coli outbreak that hit McDonald’s diners in Oregon and Michigan at the time. And this instance was the first time this strain of the disease was linked to a major outbreak — though it certainly wasn’t the last. As suspected, contaminated meat was the issue. And it still continues to be a concern among restaurant chains everywhere.