These 15 Surprising Signs Could Mean You Have a Sleep Disorder

Sleep disorders are fairly common among Americans. But we don’t always attribute the signs to an actual disorder. If you’ve noticed any of the following signs yourself, it’s important to talk to your doctor. One unlikely symptom may indicate a serious sleep disorder (on page 10).

1. You wake up during the night

Waking up during the night is a sign. | Photodjo/iStock/Getty Images

Everyone wakes up in the middle of the night every once in a while. You’re only human, and it’s possible that your sleep cycle could get disturbed every now and then. But constantly waking up two or three (or more) times each night means your brain isn’t settling down the way it should be. It could be something known as middle insomnia, and it happens when you can fall asleep easily but find yourself awake in the middle of the night.

Next: Sleep deprivation is linked to this.

You may feel depressed. | iStock.com/grinvalds

According to sleepfoundation.org, sleep deprivation directly affects happiness. And if you’re consistently getting too few hours of sleep, it may take a serious toll on your mood. People with insomnia are 10 times more likely to have clinical depression than those with normal sleep patterns. If you’ve been feeling down, it may be because of a sleep disorder. Getting the proper help could improve your mood and quality of life.

Next: These are a strong sign of a sleep disorder.

Hallucinations can be scary and confusing. | KatarzynaBialasiewicz/Getty Images

Hallucinations can signal a serious sleep disorder, such as narcolepsy. You may experience hallucinations or vivid dreams while you’re falling asleep or waking up. Not all cases of narcolepsy result in hallucinations; some cases are more mild. But if this is something you’ve experienced, it could be a more severe case. It’s important to talk to your doctor if you’ve noticed hallucinations during your sleep cycle.

Next: Naps might be a bigger problem than you think.

4. You’re sleeping throughout the day

Sleeping throughout the day can be a problem. | iStock.com/Highwaystarz-Photography

You may need a nap every once in a while, but you should be able to get through the day without one. If you find that you’re always in need of a nap, it could signal a serious issue, such as a sleep disorder. According to Smithsonian Magazine, those who nap frequently tend to die younger than those who don’t. If you’re getting eight hours but still feel tired enough to need a nap, you may be having trouble falling into a deep sleep.

Next: This is scary to experience, but it happens.

Sleep paralysis can happen to anyone. | Povozniuk/iStock/Getty Images

Sleep paralysis is the temporary inability to move or speak when falling asleep or waking up. Most people will experience it at some point in their lives, but those who have chronic sleep paralysis may have a bigger problem: A serious sleep disorder. According to WebMD, sleep paralysis means that your body is not smoothly transitioning through the several stages of sleep. This could mean that your body isn’t getting the sleep it needs, which could lead to depression and other problems.

Next: This daily activity might be difficult with a sleep disorder.

If you get behind the wheel and feel drowsy, it could be dangerous. It’s easy to get bored behind the wheel and feel a bit tired every once in a while, but if a long drive makes you feel like you can’t keep your eyes open, get tested for a sleep disorder. Treatment could save your life or someone else’s. Plus, knowing you’re tired may make you not feel comfortable driving. This could impact your quality of life.

Next: This is a huge sign of a sleeping problem.

7. You fall asleep unexpectedly during the day

If you close your eyes for a minute and can fall asleep just about anywhere, it could be a rare but well-known disorder called narcolepsy. The cause of narcolepsy isn’t well understood. Some researchers attribute it to genetics and abnormal signals being sent throughout the brain. The disorder only occurs in about 1 in 2,000 people, but talk to your doctor if you think it could be the reason for your troubled sleeping habits.

Next: This is directly affected by sleep.

You may forget about plans, work, etc. with a sleep disorder. | nandyphotos/iStock/Getty Images

According to Medical News Today, poor sleep causes memory loss and forgetfulness. A recent study found that sleep produces brain waves that are vital to storing memories. A lack of sleep means that our brains might not store memories as well as they could. This could lead to forgetfulness. If you find that you’re having trouble remembering day-to-day tasks, it could be because of a sleep disorder rather than dementia or Alzheimer’s.

Next: If this is affected, you may want to blame sleep.

9. Your work performance has faltered 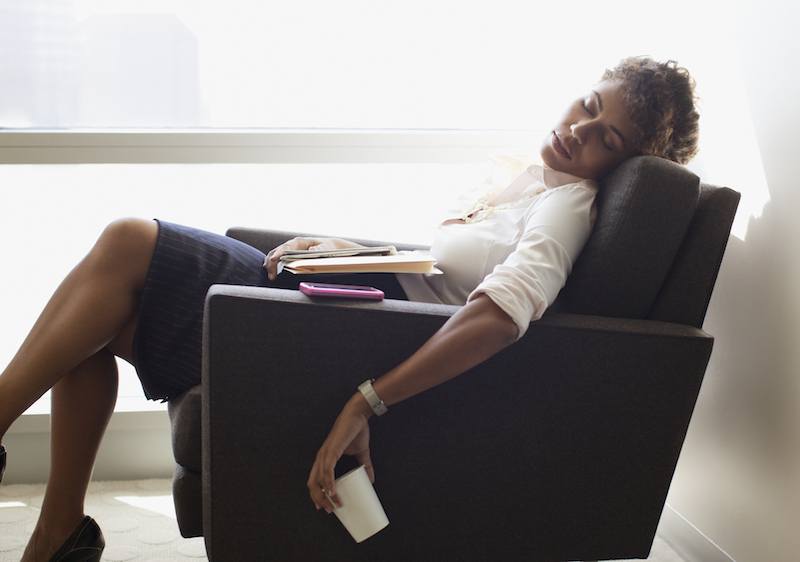 Does your drowsiness at work feel like more than the afternoon slump? | Sam Edwards/OJO Images/Getty Images

On nights when you don’t get any sleep, do you ever find yourself sacrificing work because of it? Whether it’s skipping because you’re too tired or not concentrating because you didn’t sleep much, sleep is a crucial part of being successful at your job. It’s important to get to the bottom of the problem if you notice your performance suffering.

Next: Sleep directly affects this characteristic.

Babies cry when they don’t get enough sleep, and adults get cranky. If you’ve been unexplainably irritable lately, it could be because of your sleep habits. Even if you get six hours of sleep, your mood could be affected. So if you have a serious sleep disorder, don’t be surprised if you’re very irritable. You may not even realize you’re not getting any sleep. But talk to your doctor, and monitor your sleep habits for a while to find the root of the problem.

Next: You may not be a morning person, but you should wake up easily.

11. You’re exhausted as soon as you wake up

The morning should be a time when you feel the most refreshed. After all, you just got about seven to nine hours of sleep (or you should have). But if you feel exhausted the moment you get out of bed, and it doesn’t go away within the first hour that you’re awake, it could mean you aren’t getting enough sleep at night. This could signal a problem with your sleep cycle.

Next: These can suffer from your irritability.

12. Your relationships are suffering

Your relationships may suffer. | Bokan76/iStockGetty Images

Irritability can affect your mood, which can in turn affect your relationships. Often, people don’t notice when they’re acting irritable toward others. But those around you, such as a partner or friend, will notice if you’ve been acting annoyed toward them. And since irritability often stems from the amount of sleep we get, you could be jeopardizing your relationships if you don’t talk to your doctor about a possible sleep disorder.

Next: Your wake-up habits say a lot about your sleep quality.

13. You wake up super early

An early wake-up could mean a sleep disorder. | Klebercordeiro/iStock/Getty Images

If you want to sleep in on the weekend but always find yourself waking up around the same time as Monday-Friday, it might not be a problem. Our internal clocks often wake us up that way. But if you’ve noticed you’re constantly waking up at 4 a.m. when you don’t need to be up until 7 a.m., it could be a sign of a sleep disorder. Talk to your doctor about insomnia or sleep apnea.

Next: If you find this difficult, sleep may be the cause.

14. You find it difficult to concentrate

Many who find it difficult to pay attention might assume they have ADD, or attention deficit disorder. But actually, a lack of sleep can produce the same symptoms. If you find it difficult to concentrate but can’t figure out why, take a look at your sleep patterns. Are you waking up in the middle of the night? Are you getting too few hours of sleep? It’s possible that a sleep disorder could be the root of your concentration issues.

Next: Does bedtime stress you out?

15. You find it hard to fall asleep

If you have something stressful on your mind, it’s normal to have some trouble falling asleep. But if it constantly takes you a long time to get some shuteye, even without any stress, it could be a sleep disorder. Try adjusting your daily habits, such as not exercising late at night and not drinking caffeine past mid-afternoon. If those changes don’t help, it’s likely you have a bigger problem.