Before they were the glamorous stars of some of HGTV’s most-watched shows, these hosts were normal kids, students, and even actors. Read on for some of the cutest (and craziest) photos of your favorite hosts from Fixer Upper, The Property Brothers, and more! 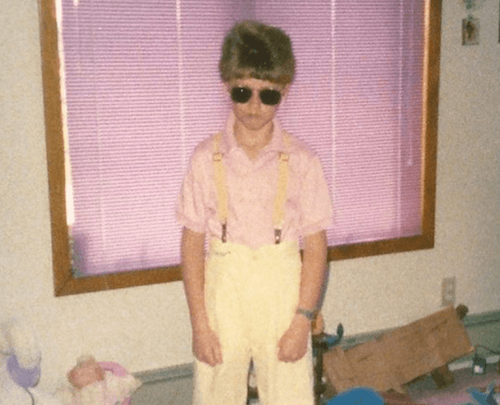 Before she explored her passion for rehabilitating old homes in the midwest, Curtis experimented with some interesting fashion trends. The 41-year-old mom of two shared a photo of her 10-year-old self.

She joked that at a young age, “fate intervened,” telling her not to pursue a career in fashion. Fans of Rehab Addict and her book, Better Than New, are probably glad she didn’t!

Next: This host had a role in a popular cult film.

Before Hilary Farr helped couples keep and renovate their homes in Canada, she was playing a bride in Transylvania. The designer and actress had a nonspeaking role as the bride in The Rocky Horror Picture Show in 1975.

According to Popsugar, she got the role thanks to Tim Curry, the film’s lead. The two were neighbors in London at the time.

Next: One half of this popular HGTV partnership was an athlete.

HGTV’s famous twins reel audiences in with their dream home transformations. Before Jonathan was half of the Property Brothers, he was hitting the court.

Jonathan posted a hilarious photo of his younger, lankier self to his Instagram page. “#TBT,” he wrote,
“@ncaasports ain’t got nothin on this!”

Next: Drew is always trying to compete with his brother…

They were such cute kiddos. | Drew Scott via Instagram

Drew has his brother beat on the throwback photo count. Notable examples include a throwback to his high school graduation and this adorable picture of both Drew and Jonathan as kids.

“TBT‬ We may compete on ‪#BroVsBro, but I wouldn’t want to call anyone else my best friend,” Drew captioned the photo.

Next: This host dressed psychedelic as a kid. Before Trading Spaces and Dear Genevieve, Gorder was rocking a hippie look while attending Sesame Street as a child with her father. The dirty blonde home designer also shared this childhood picture which reveals her long locks, brown at the time, pulled back with a red bow.

Next: This host surrounded herself with famous people long before her show.

The Flip or Flop host combined her loves of flipping houses and basketball and shared an adorable throwback picture. On the day of the Real Estate and Wealth Expo, El Moussa posted an old picture of her legendary professional basketball player Magic Johnson.

The caption read: “25 years ago … Today with @magicjohnson … grateful to be on stage after him at the @realestatewealthexpo.” Moussa has shared a few throwback posts with her followers, including this one of her lounging in a hammock as a teenager.

Next: The host who was a ’90s dreamboat.

Such a cute moment for him to remember. | Josh Temple via Instagram

Temple took us back to the late ’90s when plaid, bleached tips, and tan skin thrived. The House Crashers host rocked all three in this throwback photo that he posted to his Instagram page.

Temple also posted an adorable throwback “Flipagram” for his daughter Ruby’s 13th birthday. It featured a slideshow of Temple and Ruby throughout the years set to Christina Aguilera’s song “Beautiful.”

Next: This host used to be more about the journey than the destination (home).

This star isn’t afraid to look into the fun moments of his past. | David Bromstad via Instagram

The Design Star mentor and My Lottery Dream Home host may have been more into the journey than the destination as a kid. Bromstad shared a picture of himself as a kid on his self-dubbed “fierce Honda 3-wheeler.”

While he appeared shirtless in the first picture, he definitely went for a Color Splash in this throwback: a school photo of him smiling in a colorful sweatshirt.

Next: The host who rocked frosted tips and sideburns.

This look is crazy … but it worked for him! | Scott McGillivray via Instagram

Temple wasn’t the only one to rock the frosted tips back in the day. Scott McGillivray, the host of Income Property, attempted to pull off the ’90s boy band look at age 21, completing it with a Hawaiian shirt and tiny white sunglasses.

“Remember when frosted tips and long sideburns were cool? 21 was awesome! #throwbackthursday,” he captioned the photo. McGillivray posted another throwback to celebrate the return of new episodes of his show, however, his fans were mostly celebrating the fact he was shirtless.

Next: America’s handyman had a fresh cut in the ’70s.

This photo is chock-full of 70s vibes. | Carter Oosterhouse via Facebook

“America’s Handyman” had some promising potential as a child model back in the ’70s. The star of Carter Can posted a throwback picture to his Facebook page that featured nearly every print in existence at the time.

“#TBT Looking funky fresh in the 70’s. I miss this haircut!” Oosterhouse wrote.

Next: One half of HGTV’s best couple throws it back.

This photo is so nostalgic. | Joanna Gaines via Instagram

Joanna has made a reputation for more than just her incredible talent as an author and home designer. The Fixer Upper host is worth the Instagram follow, especially if you want to see touching throwback photos of her family, wedding, and childhood.

She posted a particularly touching photo last Mother’s Day featuring her alongside her siblings, all crammed onto her mother’s lap. “‘Her children arise and call her blessed. Many women do noble things but you surpass them all.’ Proverbs 31. Happy Mother’s Day Mom,” she wrote.

Next: Joanna’s huband had to step his throwback game up.

He posted this photo along with a sweet message. | Chip Gaines via Instagram

Joanna is notorious for posting photos of her co-host and husband, Chip, as well. One notable example is this handsome throwback of Chip as a high school senior. The football captain and varsity basketball star was clearly a catch: Joanna made sure to hashtag “glory days” and wish her “study” a happy 39th birthday.

Chip has been known to post a few of his own memories to the internet, too. In the middle of his “Chip-starter contest,” which encouraged X, the Fixer Upper host posted a photo from his Baylor University graduation. The caption was equally as touching as the photo, reading; “In college one of my lifelong dreams of playing baseball didn’t quite play out how I’d hoped it would. But had it not been for that Baylor baseball team, I never would’ve fallen in love with Waco, Texas. And without Waco, I never would’ve met Jo.”

Next: This red-hot host knows how to laugh at herself.

Sherrod has quite the fashion sense. | Egypt Sherrod via Instagram

Sherrod doesn’t just hold the hands of first-time home buyers. The Property Virgins host, author, and mother, like plenty of the other HGTV hosts, knows how to balance multiple passions.

A passion we didn’t realize Sherrod had? Rocking red denim-on-denim ensembles with her friends. She posted this throwback picture with her friend, Maleka Greene, laughing about their solemn expressions and outfits.

Next: She sells enviable homes but didn’t have an enviable haircut.

Everyone must have a fun photo like this stashed away in their albums. | Sabrina Soto via Instagram

The HGTV host wears many other hats: Homestyle expert for Target, LEED accredited real estate agent, and cook. In addition, she made the list of hosts famous for posting charming childhood photos.

Soto posted a holiday throwback for Easter with none other than the Easter bunny himself. “It was either windy that day or someone cut off half of my bangs,” she joked regarding her childhood haircut.

Next: The honorable mention goes to …

This one takes us way back. | IronForgeLA via YouTube

Everyone’s favorite (and only) Bachelor and Bachelorette host made a name for himself before he began side-stepping into frames and helping men and women find their soulmates.

Harrison was the host of a design competition show, Designer’s Challenge, on which designers had to submit their interior designs to homeowners in the hopes that they’d chose to make them a reality. Harrison was the narrator and provided the voice-overs for the show, probably practicing for the days when he’d say the famous line, “This is the final rose tonight.”