People lose their mind at McDonald’s when they aren’t served quickly enough or if the popular chain runs of our their favorite food.

Because so many people are displaying bizarre behavior over what should be a mundane experience, bystanders are taking videos and sharing them online. While each video is outrageous in its own right, the woman on page 5 takes the concept of the supersized meal to a whole other place.

This customer was not happy when this chain ran out of his favorite dipping sauce. | Mr.BananaWaffle via YouTube

Sci-fi cartoon Rick and Morty fans literally lost their minds when McDonald’s offered McNugget Szechuan dipping sauce for one day. The show included the sauce in an episode, but fans were enraged when the restaurant chain quickly ran out of sauce, CNBC reports.

One customer seriously went off the rails when he was told his McDonald’s location ran out of sauce. He certainly wasn’t loving it.

Next: People don’t like to wait for food, but this is ridiculous.

2. Don’t be slow with the McChicken

McChicken is serious business as this customer tried to leap over the counter and attack a McDonald’s employee when her McChicken sandwich wasn’t delivered immediately. The encounter resulted in an injury and two customers getting arrested. Who knew working at McDonald’s was such a dangerous job?

Next: Drama isn’t limited to customers only.

3. This news set him off 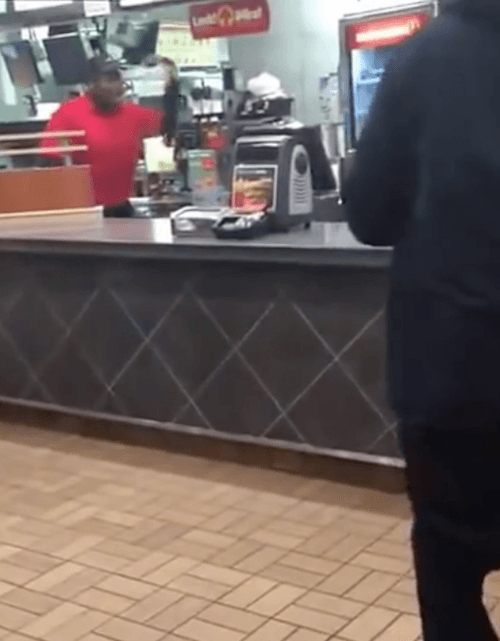 This unhappy employee was angered when he was given a pink slip. | Were We Lied To via YouTube

When this McDonald’s employee was fired from his job, he went on a tirade, trashing the place. His rant was met with disinterest from other workers, who went about their shift.

One customer shot a video, showing the floor covered in cups, straws and other items the worker smashed to the ground. “Welcome to St. Paul,” can be heard in the background amid some giggles.

Next: Get my order right!

A manager would have likely rectified this issue. | iStock.com

Looks like one McDonald’s worker messed up the order for the wrong customer. A woman went nuts when she was given fries instead of ice cream. Then she becomes irate over her meal price, demanding money back when she was charged an extra 40 cents. Another patron tries to defuse the situation but backs down when she keeps exploding.

She went on to get angrier and angrier letting a number of expletives flow faster than the McDonald’s McFlurry machine.

The true definition of a “hangry” customer. | Jetcityimage/Getty Images

This customer was completely incensed she not only had to get out her car due to a crowded drive-through, she was enraged that the employee forgot to offer her an extra McRib for $1 when you buy the McRib meal.

When the employee responded by saying the customer clearly didn’t “need an extra McRib,” the agitated woman screeched, “McScue me, bitch?” And she promptly connected her fist with the employee’s throat.

Next: The McNuggets made her do it.

6. Don’t mess with my McNuggets

These two ladies were quite the McNugget lovers. | Kornnphoto/iStock/Getty Images

Next: Was this the inspiration behind changing breakfast service times?

Perhaps they could have grabbed a bagel at a nearby deli. | Justin Sullivan/Getty Images

Two women trashed their local McDonald’s when they missed the cut off for breakfast. While missing a chance to bite into a delicious Egg McMuffin can make even the tamest customer a little angry, these ladies got downright violent, assaulting everyone and anything in their path.