A warm exchange between Barack Obama and Melania Trump went viral, prompting a booming response from the Internet.

So what exactly went down between the two during Barbara Bush’s funeral that everyone can’t stop talking about online? Check out this photo of the two on page 4.

1. Obama is known for putting people at ease

Barack Obama had a way with people. | Bill Pugliano/Getty Images

It’s no secret Obama lights up a room. Whether he’s meeting children or heads of state, people can’t help feeling comfortable in the former president’s presence.

Next: These kids’ reactions say it all.

2. Children have this response to the two most recent presidents

Kids have pretty different reactions to each president, especially during Halloween. This side-by-side comparison says it all.

Next: Obama even gets a smile from him.

3. Obama’s charms work with Trump too

Donald Trump’s tough demeanor cracked while meeting with Obama. Obama’s grace, class, and humor got Trump to smile and even laugh. This is after Trump attacked Obama on nearly every policy and the validity of his birth certificate.

Next: It’s not just Obama who can get Melania to smile.

4. The photo that says it all: Melania looks happy with Obama

Melania Trump was spotted smiling while conversing with Barack Obama. | EdKrassen via Twitter

During the funeral, Melania and the former president exchanged a few words and smiles, perhaps sharing a fond memory of Barbara Bush.

Next: Melania’s reaction to Obama versus her husband speaks volumes.

5. Is she happier at a funeral with Obama than with her husband at this inauguration dinner? 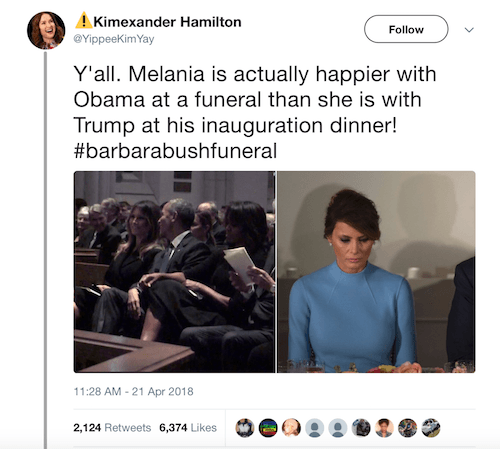 She seemed at east while talking to the former president. | YipeeKimYay via Instagram

A side-by-side tweet shows how much happier Melania looks sitting next to Obama during a funeral. This is in stark comparison to sitting next to her husband during the inauguration.

Next: This video shows how Melania really feels about her husband.

6. There are more frowns than smiles with her husband

We don’t see her smiling too much when she’s around Donald. | Drew Angerer/Getty Images

While Obama got Melania to smile during a somber event, Trump managed to make his wife tremendously unhappy during what should have been a joyful event.

Melania also seems unhappy or downright annoyed with her husband on other occasions. From swatting his hand away to looking expressionless while in his presence, Obama seemed to achieve what Trump cannot.

Next: The internet is cracking up about the moment.

7.  The Obama and Melania moment produced these hilarious tweets

The viral photo took on a life of its own through some of these funny tweets. Even one fake Trump account addressed how Obama made Melania smile.